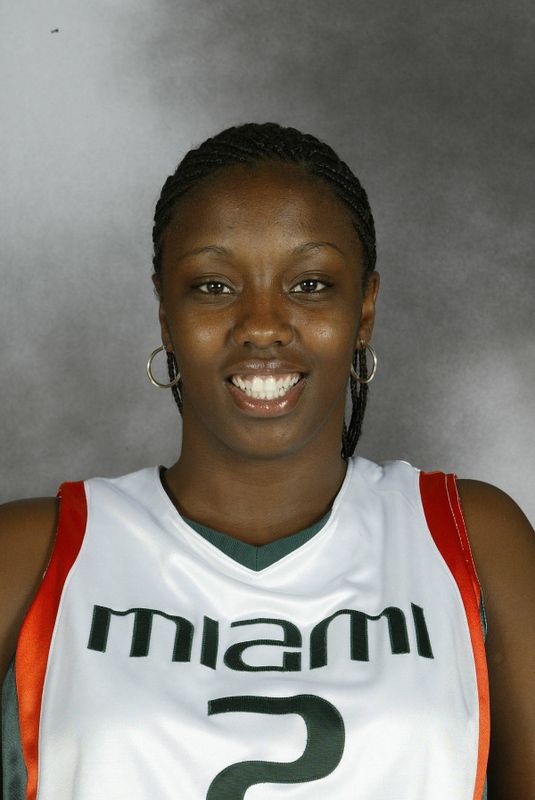 At Miami
From day one, James has made her mark as one of the nation’s top players while etching her name throughout the UM record books…One of the country’s most prolific due to her ability to score in the low post as well as the range to hit the deep three…The National Player of the Year candidate enters the season ranked third all-time at UM in career scoring average (20.0 ppg)…Sits at fourth place all-time with 1,761 points and is on pace to challenge Maria Rivera’s mark of 2,358 for tops all-time at UM…Ranks ninth all-time in career rebounding average (6.5 rpg), sixth in field goals made (650), eighth in field goal attempts (1,305), ninth in field goal percentage (.498), fourth in three pointers made (97), fourth in three point attempts (280), fifth in three point percent (.346), fifth in free throws made (364), sixth in free throw attempts (476) and third in free throw percent (.765).

2004-05 (Junior)
Was named an Associated Press and WBCA Honorable Mention All-America as well as an All-ACC First Team selection after leading the ACC in scoring with 22.3 points per game…Named a Naismith National Player of the Year candidate and a Kodak Region II All-America selection…Voted to the Preseason All-ACC Team and the Second Team All-ACC Tournament team…After leading the BIG EAST in scoring as a freshman in 2002-03 and the ACC in scoring in 2004-05, became just the second player in NCAA history to lead two major conferences in scoring…Finished the season ranked fourth nationally in scoring…Her 22.3 points per game was good for sixth all-time at UM for single-season scoring averages…Set the seventh-highest total for field goals made (242), sixth-highest total for field goals attempted (504) and 10th highest total for free throws made (124) all-time in a single season at Miami…Was named the ACC Player of the Week three times…Was the only player in the ACC to score in double figures in all 29 games in 2004-05…Recorded more 30-point (5) and 20-point (17) games than any other player in the conference…Set or tied career highs in points, field goals made, field goals attempted, three point field goals attempted and steals…Led the Hurricanes in nearly every statistical category including field goal percentage (.480), field goal attempts (504), field goals made (242), three point percentage (.328), free throw attempts (161), free throws made (124), rebounding (6.9 rpg) and average minutes played (36.1)…Finished second on the team in three point attempts (119), three pointers made (39), free throw percentage (.770) and steals…Scored 39 points against Fairfield (12/28) at the UM Holiday Classic to mark the seventh-highest single game point total in UM history…Also tied the school record for field goals made in a game with 15 against Fairfield…Recorded 29 field goal attempts against Virginia Tech (2/6) to tie the mark for the third-highest single game total in school history as part of a 35-point outing against the Hokies…Put together an impressive three-game stretch in which she averaged 33.7 points against Fairfield, Loyola Marymount (12/29) and Coppin State (1/2)…Scored 31 points with nine rebounds and five steals while single-handily outscoring the Cavaliers 12-8 in the games’ final four minutes to seal a win at Virginia (2/10)…Scored 15 points, including the game-winning basket as time expired, in a win over Georgia Tech (3/4) in the opening round of the ACC Tournament.

2003-04 (Sophomore)
Earned All-BIG EAST First Team and Full Court Press All-America Honorable Mention honors after leading the Hurricanes with 16.6 points per game…Named the BIG EAST Player of the Week twice…Selected to the All-BIG EAST Preseason First Team…Became just the 17th player in UM history to reach 1,000 career points, finishing the season ranked 14th all-time in school history with 1,114 career points…Scored in double figures in 23-of-28 games played while starting 26-of-28 games played…Missed the Pittsburgh game (1/17) due to a sprained neck suffered against Georgetown (1/14)…Led UM in three-point field goal percentage, connecting on 39-of-103 (.379) from beyond the arc and finished third on the team in field goal percentage, going 170-of-340 (.500) from the field…Recorded the second-most field goals (170), field goal attempts (340), three-pointers made (39), three-point attempts (103), free throws made (85), free throws attempted (111) and average minutes played (36.4) on the team during the season…Ranked third on the team with 4.6 rebounds per game…Earned BIG EAST Player of the Week honors for the week ending Nov. 24 after hitting 21-of-29 (72.4) from the floor while averaging 26 points in a pair of wins over Morehead State (11/22) and Eastern Kentucky (11/23) at the Morehead State Tourism Commission Tip-Off Classic in Morehead, Ky…Pulled down seven rebounds and went 14-of-18 from the field enroute to a career-high 37-point outing in the win over Eastern Kentucky…Hit a career-high four three-pointers, going 11-of-15 from the field to lead UM over St. John’s (1/3)…Scored 11 points and recorded nine rebounds and five assists in a win over No. 20 Boston College (1/10)…Was named the BIG EAST Player of the Week for the week ending Feb. 23 following an impressive outing against Syracuse (2/18) in which she hit a career-high five three-pointers…Scored 22 points in 25 minutes in UM’s win over Seton Hall (2/21).

2002-03 (Freshman)
Recorded perhaps one of the best freshmen seasons in UM history…Became the only freshman in BIG EAST history to lead the league in scoring, averaging 21.0 points per game which was also the seventh-highest single-season average in Miami history… Her 21.0 points per game ranked 12th nationally and first among all freshmen…Earned All-BIG EAST Second Team, All-BIG EAST All-Rookie First Team and All-BIG EAST Tournament team honors…Named a Kodak All-America and United States Basketball Writers/AP All-America Honorable Mention and a Full Court Press Freshman All-America selection…Earned BIG EAST Rookie of the Week honors five times during the course of the season, marking the most times in a season a UM player earned the honor… Recorded the fourth-highest single season point total (650) and the most by a freshman in UM history…Finished the season ranked seventh all-time at UM in a single season in field goals made (238), 10th all-time in field goals attempted (461), second all-time in free throws made (155) and third all-time in free throws attempted (204)…Scored in double figures in 30-of-31 games played and started each of UM’s 31 games in 2002-03…Recorded more double-doubles (7) than any other player on the team…Led the Hurricanes in scoring (21.0 ppg), rebounding (7.9 rpg), field goals made (238), field goal attempts (461), free throws made (155) and free throws attempted (204)…Ranked second on the team in field goal percentage, hitting 238-of-461 (.516) from the floor and averaged the second-most minutes (33.3) on the UM roster… Averaged 25.6 points and 12.3 rebounds over her first four games as a Hurricane…Scored 20 points and recorded 21 rebounds in her collegiate debut against South Florida (11/22)…Her 21 rebounds against USF was the fourth-highest single game total at UM…Scored a season-high 36 points to tie the mark for the tenth-highest single-game total in UM history against Quinnipiac (11/29) at the Wisconsin-Green Bay Tournament in Green Bay, Wis….Also hit 15 field goals against Quinnipiac to hit the fifth-highest single game total in Hurricane history…Hit 11-of-12 free throws against Maryland (11/29) which ranked fourth nationally during the season in single game free throw percentage (.917)…Hit a perfect 9-of-9 from the line against Syracuse (3/8)…Was one of 60 players selected to the participate at the USA Basketball Women’s National Team Trials held at the U.S. Olympic Training Center in Colorado Springs, Colo. following the season.

Prior to Miami
Was a McDonald’s All-American, Fourth Team Parade All-American and Nike All-American as a standout guard out of South Broward High School…Ranked the No. 14 guard in the nation her senior year according to the All-Star Girls Report…Led South Broward to three consecutive state championships from 2000-02…Named the Florida State Player of the Year in 2002…Averaged 21 points and 11 rebound her senior season at SBHS…Earned First Team All-State and First Team All-County accolades her sophomore, junior and senior seasons…Averaged 23 points , nine rebounds and four assists per game her junior season… Played with current UM teammate Lamese James during her sophomore, junior and seniors seasons and with Toccara Williams, formerly of WNBA’s Silver Stars, during her freshman and sophomore season at SBHS.

Personal
Majoring in theatre…enjoys acting, eating, talking on the phone and sleeping.