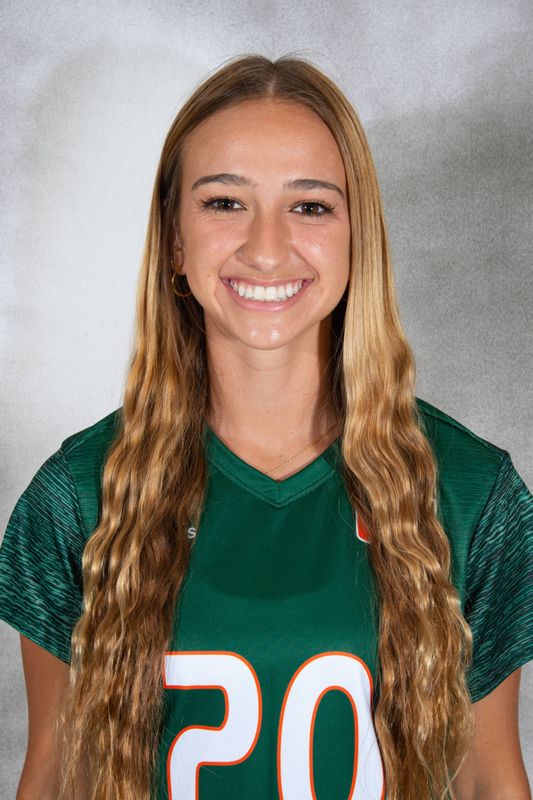 2020 (Freshman): One of just five Hurricanes to play in all 13 matches, while also collecting nine starts … Logged 782 minutes on the pitch … Registered a co-team-high 12 shots on the season with four on goal … Led the team with three assists and tied for the second most points on the team with three … Played 52 minutes in her first collegiate contest against Clemson (9/12) … Earned her first start in the ACC opener against Louisville (9/17) … Collected her first shot on goal in a set back against Virginia Tech (10/15) … Played a season-high 81 minutes in the fall finale against Duke (11/1) …. Connected with Jackie Koerwitz in the spring opener against FGCU to register her first collegiate assist … Notched her first double-digit assist match, collecting two against FIU in the Hurricanes’ 4-0 victory over the Panthers (3/14).

Bio: She is one of two incoming first-year students from the Golden State … Competing at San Marcos High School, she was named the team’s Offensive Player of the Year, finishing as its leading scorer and was recognized as a First Team All-Conference member … Played for San Diego Surf at the club level from U12-U18, including four years in ECNL and two years in USSDA, finishing her career at LA Galaxy San Diego at the U19 level … In 2018,  led San Diego to the USDAA U17 Surf Cup Championship title … 2019, she was granted Top Drawer Offensive Standout honors.