Our Lady of Mercy Academy 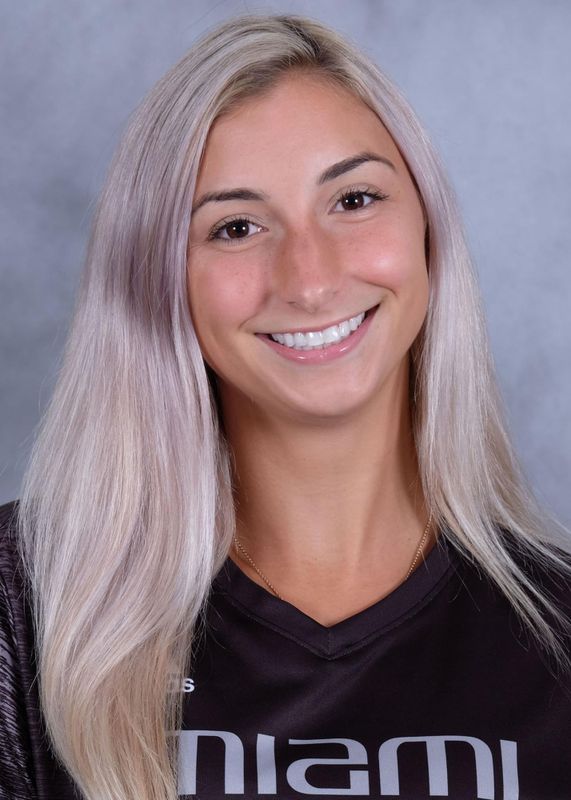 2018 (Sophomore): Saw action in 15 matches … Logged 826 minutes in her sophomore campaign … Played at least 40 minutes in 11 matches, including 70-plus in four contests … Made her second collegiate start and first of seven consecutively to kick off the season, going the distance against Florida Atlantic (8/17) … Notched two assists in a victory over FIU (8/19) … Contributed in the midfield of shutout victory over Lipscomb (8/24) … Recorded two shots against Syracuse (9/29), as the Hurricanes recorded a clean sheet … Aided a shutout victory over ninth-ranked Florida State (10/25).

2017 (Freshman): Lone Miami freshman to play in all 16 matches and the lone one to start a match … Recorded one goal and two points … Attempted six shots, putting three on goal … Amassed 560 minutes of playing time … On the field for over 40 minutes eight times, including 50-plus on three occasions … One of two Miami freshmen to debut in the opener versus St. Francis (PA) (8/18), earning 45 minutes of playing time and scoring a goal in the 87th minute on the first shot of her career … Notched a shot attempt at FIU (8/20) in her first collegiate road action … Played 41 minutes in the victory at Miami (OH) (8/25) … Posted one on shot on goal in 58 minutes of action against Boston College (10/8) … Logged one shot attempt in a season-high 60 minutes at Syracuse (10/11) … In the win over Pittsburgh (10/19), earned her first start and finished with two shot attempts, including one on goal, in 51 minutes.

High School: Four-year letter winner and three-time team captain at Our Lady of Mercy Academy … Scored 31 goals, a school record, and totaled a team-best 28 assists as a senior … Garnered NJ.com All-Cape Atlantic League Player of the Year distinction and The Daily Journal Player of the Year honors …  Led her team to a 15-6 record, a first-place conference finish and an appearance in the state sectional finals … As a junior, tallied a team-high 21 goals to go along with eight assists … Earned NJ.com First Team All-League accolades as both a junior and a sophomore … Received second team all-league recognition as a freshman … Earned letters in track each of her final three years of high school …  Notched first team all-league distinction in the 400m as a junior after winning the league championship … Lettered in swimming as a freshman and sophomore to give her a total of nine varsity letters … Member of the National Honor Society, senior class secretary and four-year honor roll student.

Club: Competed for Mount Laurel United … Finished first at Mid-Atlantic Regionals in both 2016 and 2017.

Personal: Full name is Tia Rose Dupont … Nickname is “T” … Born Feb. 19, 1999 … Parents are Guy and Dawn Dupont … Mother and stepfather, Paul Bidic, own a used car dealership … Has three older brothers, Todd, Justin and John Guy, as well as an older sister, Danielle … Intends to major in business/marketing … Career goal is to run or open a business … Favorite athlete is Mia Hamm because she read her book when she first started playing soccer and it inspired her to work hard … Best sports memories are high school senior night and scoring the winning goal in the 2016 club regional championship … Enjoys going to the beach, running, hiking, traveling, reading, writing and animals … Chose Miami because of the location and campus, as well as her desire to compete in the ACC … Committed to Miami over Drexel.