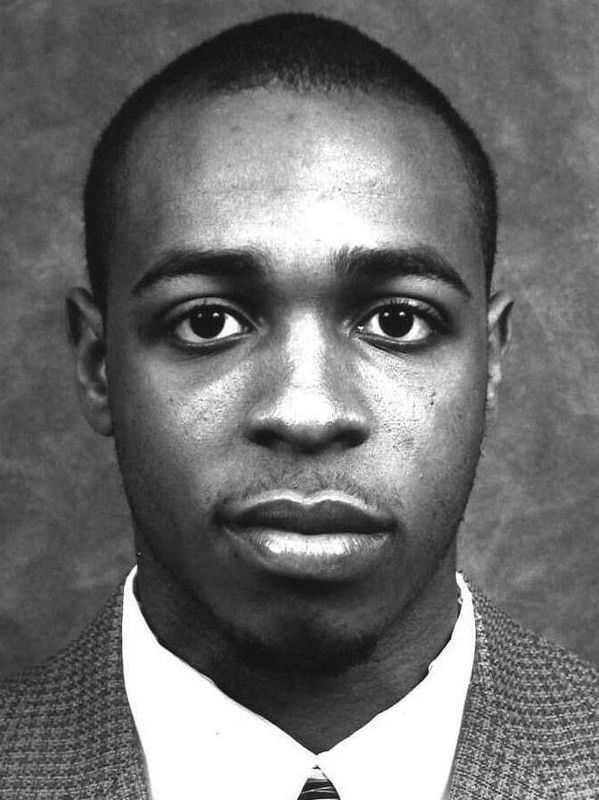 Was one of seven ‘Canes to play in all 29 games … converted 22-28 free throw attempts (.786)…averaged 15 minutes per game for the season, but increased that average to 18 minutes per contest in UM’s three post-season games (BIG EAST Tournament and NID … his 434 minutes played were tops among UM’s highly touted freshmen class… finished third on the squad in assists (58) and assist-to-turnover ratio (1.49:1) and fourth in steals (29)… led UM in assists on four occasions, including three of UM’s final five contests.

In the Regular Season:

Recorded a career-high in nine assists to go with five rebounds in 24 minutes in UM’s victory over Jacksonville (12-18-96) … also totaled eight points in the victory over the Dolphins … the nine assists against Jacksonville marked the third highest freshmen single- game total in school history… registered five steals in UM’s victory versus Lehigh (12-30-96) …had eight pointsand three rebounds in 14 minutes at Tennessee (12-22-96) … made his collegiate debut against Buffalo {11-22-96) and had three steals in 10 minutes.

In the BIG EAST Tournament:

Played in both games averaging 3.5 assists 16.5 minutes off the bench … recorded three assists in 10 minutes in the opening round against St. John’s (3-5-97)… played 23 minutes in the quarterfinal against Georgetown (3-6-97) and recorded four assists, five rebounds and one block. In The National Invitational Tournament; Set a school NIT single-game record with five assists in UM’s game at Michigan (3-13-97).

Played in Miami’s last 20 games, including 12 consecutive starts, after missing the first eight games with a broken bone in his left foot… averaging 4.0 points, 4.0 rebounds and 3.9 assists per contest… led team with a 1.8-to-1 assist to turnover ratio… led or tied for the team lead in assists 10 times, steals six times and rebounding twice.

IN THE REGUALR SEASON

Returned to the Miami lineup against Memphis (12-22-97)… did not score but recorded a team high eight assists in 20 minutes of work… recorded 12 points against Notre Dame (2-22-98), hitting 4-0f-8 from the floor, including 1-of-2 from three-point range, and 3-of-3 from the line… also recorded three rebounds, two assists started against Notre Dame (2-14-98) and set career-highs in points (12), minutes (36), field goals (6) and field goal attempts (12L.also pulled down seven rebounds and handed out a team-high five assists … made first career start against Villanova (1-22-98) and registered six points, four rebounds, three steals and a team-high seven assists in 30 minutes of action.

Started and played 28 minutes in Miami’s BIG EAST Tournament game against Georgetown recording team highs in assists (4) and rebounds…scored four points on 1-of-4 shooting from the field and 2-of-2 shooting from the line.

Did not score but led team with seven assists against UCLA in the opening round of the NCAA Tournament.

Recorded two points, connecting on his only field goal attempt, four rebounds, five assists, one block and one steal in 28 minutes at No.8 Kentucky (12-5-98) … scored a career-high 19 Players points to go with three rebounds and three assists in 29 minutes of work against Ohio State C12-27-98L.was 6- of-8 from the floor, including 2-of-3 from three-point range and 5-of-6 from the line … played a career-high 38 minutes against Georgetown (12-30-98) and recorded one point, four rebounds, two steals and a team-high seven assists … recorded second double figure scoring game of the season with 10 points to go with five rebounds, a team high five assists and one block in 35 minutes versus St.John’s (1-6-99> … started and played 25 minutes against Rutgers (1-13-99) despite having both big toe nails removed due to an infection … recorded eight points, two rebounds, three steals and a team-high six assists … played 36 minutes against Seton Hall (1-27-99) recording eight points, five rebounds, seven assists, three steals and one block … did not start for the first time this season against St. John’s (2-3-99) because of back spasms … played 38 minutes and recorded eight points, three rebounds, six assists and three steals … was 2-of-3 from the field and 4-of-4 from the line … played 36 minutes at No. 18 Syracuse (2-8-99) recording eight points, four rebounds, two steals and a career-high 11 assists … was 2-2 from the field and 4-5 from the line … recorded nine points, four rebounds, eight assists and a career-high six steals against Providence (2-13-99) … recorded seven points, three rebounds, two steals and a team-high five assists against No. 2 Connecticut (2-20-99).

In the BIG EAST Tournament: Started both games and averaged 1.0 points, 3.0 rebounds and 6.5 assists per game …recorded two points, four rebounds and five assists against Georgetown <3-4-99) … did not score against St. John’s (3-5-99) but did register two rebounds, eight assists and four steals.

In the NCAA Tournament: Started both games averaging 3.0 points, 5.0 rebounds and 5.5 assists per game … recorded two points, a team-high eight assists and tied for the team high with seven rebounds against Lafayette … had four points, three rebounds, three assists and three steals against Purdue (3-14-99).

Played and started in all four games at point guard … averaged 8.5 points, 4.0 rebounds, 2.0 steals and a team-best 5.5 assists per game … shot 14-of-26 (.538) from the field and was a perfect 5-of-5 from the line … had eight points, three rebounds, six assists and only one turnover in the tour opener against Boca Juniors … had five points, four rebounds, five assists and three steals in Miami’s victory over Andino Sports Club … registered 12 points, on 5-of-6 shooting from the field, three rebounds and three assists against the Argentine National Team … recorded nine points, six rebounds and a tour-high eight assists in the tour finale against Welcome Athletic Club.

Senior guard who returns as one of the Hurricanes most versatile performers … started at point guard last season but has also played shooting guard and small forward during his career … has tremendous leadership skills and maturity … a good ball handler who sees the floor very well…has nice size and strength for a guard .. .is a strong rebounder from the guard position … has played an integral part of the Hurricanes’ accent into the national spotlight. .. during his first three seasons the Hurricanes have posted a 57-30 (.655) record, three consecutive winning seasons, and three straight postseason appearances including NCAA Tournament bids in 1998 and 1999 … Miami’s 57 wins are the most in a three year period since UM won 57 games from 1963-66 while its .655 winning percentage is the highest since Miami posted a 52-26 (667) record from 1964-67 … with a postseason bid this season he would join fellow seniors Mario Bland and Johnny Hemsley as the only Hurricanes to reach post season play in four consecutive seasons.

Benjamin E. Banneker High School in College Park, GA … earned two varsity letters and was a two-time team MVP … garnered All-Metro honors in both his junior and senior seasons and was a first-team All-State selection as a senior when he averaged 22 points, nine rebounds and eight assists … received All-American status from Street & Smith’s, Blue Chip Illustrated, Hoop Scoop and Nike … was a three-year Boston Shootout participant…played in the annual Georgia-Tennessee Allstar game … was on the Honor Roll as a senior … coached by Joby Boydstone.