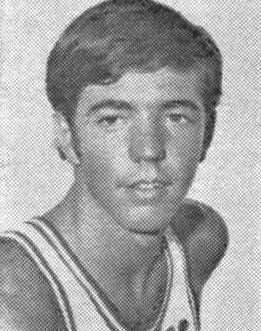 Junior guard, 6-0 ft., 170 lb., 19 years of age, physical education major…originally from Bethesda, Md. Spagnolo scored 126 points last year season as he began varsity college basketball. However, his playing time was limited as he was the replacement for Don Curnutt Miami’s second 2,000 point scoring star. Spagnolo accomplished scoring double digits four times, his high game was a 16-pointer against Bucknell when he caged seven of 13 field goal tries and was two for two from the free throw line. Spagnolo is a deadly outside shot, he scored 31.5 points a game as a freshman, with a .495 field goal percentage. He hit 78 from the foul line, he was not far of that pace in 1969-70 his speed and reflexes make him a good rebounder. Spagnolo made six against LaSalleany, he can score from any angle  and almost any place beyonf mid-court. His high school coach was Jack Gilmore.