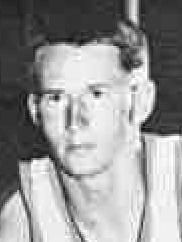 Senior guard from Muncie, Ind …. Business Administration… age 21 … hgt. 5-11 … wgt. 165… letters earned, 2. Jones teams with Junior Gee to give Miami its best pair of guards in history. Coach Bruce Hale believes the two are equal to any pair of college basketball guards in the land. Rick came to Miami with a brilliant high school record. Scholastic Magazine named him to its All-America team. He received the Mr. Basketball Award. His Muncie Central team won the state championship in his senior year, with Rick scoring 28 points and being credited with 13 assists. He quarterbacked on the football team, once scoring three TDs in a single game, including an 80 yard sprint. He lettered three times as a high school baseball pitcher – and has earned the same number as a pitcher for the University of Miami Hurricanes. Jones was 8-3 as a sophomore and last year, on Miami’s green nine, he turned in a 5-5 record against some of the nation’s best collegiate baseball clubs. In both seasons, he was handicapped in the early going as basketball and .baseball overlapped. Rick was a star on UM’s frosh basketball team of 1963-64, scoring 50 points in one game and averaging 23.5 for the season. Rick failed to earn a starting berth in his sophomore year until the seventh game, but played extensively in reserve roles. Once in the lineup, he stayed. His blazing speed, his competitive spirit – and his all around fine work in scoring, passing and defending contributed much to Miami’s brilliant 1964-65 campaign. He had a high sophomore year scoring performance of 24 points against Jacksonville. As a junior last season, the energetic Jones did a valiant job. He wound up with nine games of 20 points or more, five of them coming in his last eight starts. He had 29 against Virginia. Rick, always a good free throw man, became an expert last year when his .876 percentage set an all-time one season high at Miami. Part of the season, he was the national leader and at the finish he ranked No. 4 in the nation. A single miss kept him from ranking third. Rick’s 710 point scoring total for two campaigns ranks him 20th in the UM all-time standings. Rick’s high school coach-Ike Tallman.