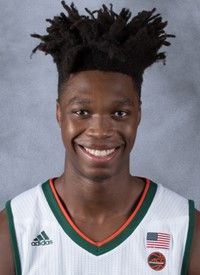 Prior to Miami
2017 McDonald’s All-American … 2017 Jordan Brand Classic All-American … Ranked No. 12 in the ESPN Top 100, second at his position and first in Pennsylvania … 2017 AP Pennsylvania All-State 6A Player of the Year … 2017 Max Preps All-American, honorable mention … Three-time Berks County Player of the Year … As a senior led Reading High to its first Pennsylvania 6A High School State Championship. Scored 35 points in the state semifinals and 22 points in championship game … Reading High School all-time leading scorer with 1,828 points … Averaged 18.4 points per game … As a junior led the Red Knights to a 29-4 record and a trip to the PIAA Class 4A state semifinals, averaging 16.9 points, 5.3 rebounds and 3.6 assists per game … 2016 Pennsylvania Gatorade Player of the Year … Played AAU ball for Team Final from the Philadelphia area, the same AAU program as Ja’Quan Newton and Davon Reed … Played on the EYBL AAU circuit in 2016, averaging 16.6 points per game, knocking down 45.5 percent of his shots. Also tallied 4.7 rebounds, 3.0 assists and 1.3 steals per outing … Great vision and ball-handling skills, can shoot from the outside or penetrate and finish at the rim … Long defender with a 6-foot-10-inch wingspan who causes havoc for opposing guards … Chose Miami over offers from Kentucky, Arizona, Villanova and Syracuse.