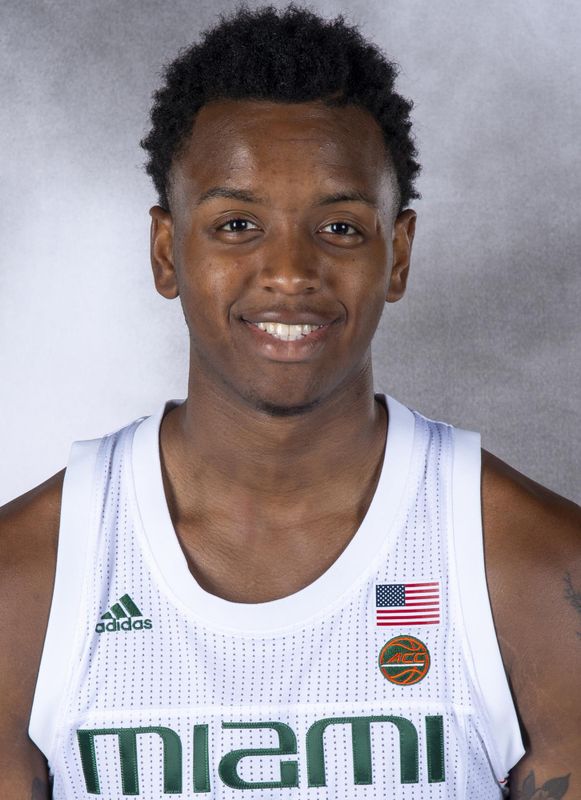 As a Redshirt Senior (2019-20): Appeared in 18 games in his lone season as a Hurricane, starting the final nine affairs … Missed the first seven contests due to a left knee injury sustained in January and then missed another six games during ACC play after suffering another left knee injury … Averaged 4.9 points, 4.6 rebounds, third on the team, and a co-team-high 1.1 steals over 23.4 minutes per game … Set the program record for rebounds in an ACC game with 18, also the most by a Miami player and second-most by any ACC player all year … Logged the most minutes (47), tied for the most assists (six) and tied for the second-most steals (four) in a game by a Hurricane … Tallied double-digit points three times, six-plus rebounds on five occasions and multiple steals five times, while playing over 30 minutes in four outings … Led Miami in rebounding on four occasions … Made his Miami debut with 15 minutes of action in the road win at Illinois (12/2) … Posted a season-best 13 points in the victory over Temple (12/17) at the Barclays Center, finishing 4-of-5 from the floor and 5-of-7 from the stripe … Grabbed nine rebounds in his first ACC action, an overtime win at Clemson (12/31) … Earned his first Miami start at eighth-ranked Florida State (2/8) and played 29 minutes … Recorded his first-career double-double in the triple-overtime win at Virginia Tech (2/19), finishing with 12 points and a career-high 18 rebounds in a career-best 47 minutes, adding a pair of blocks while shooting 5-of-10 from the floor … Notched a second straight double-digit scoring performance with 10 points, to go along with six boards, at Notre Dame (2/23) … Totaled eight points, seven rebounds, a career-high four steals and two blocks in 31 minutes against No. 22 Virginia (3/4) … Posted a career-best six assists, doubling his prior top mark, and six boards in 35 minutes in the overtime win against Syracuse (3/7) on senior day … Played 33 minutes against Clemson (3/11) in the ACC Tournament in the final outing of his career.

As a Redshirt Junior at Florida (2018-19): Averaged 6.1 points and 3.9 rebounds in 17 games with 13 starts … Suffered a season-ending left knee injury at Georgia (1/19) … Scored in double figures three times in non-conference play …Posted nine points and eight boards in the victory over West Virginia (12/4) in the Jimmy V Classic at Madison Square Garden … Logged a season-high 12 points in a win at Butler (12/29) … Scored eight points in nine minutes in the aforementioned game against Georgia … Gators went 20-16 (9-9 SEC) and advanced to the NCAA Tournament Round of 32.

High School: Graduated from Zion Lutheran … Considered a four-star recruit by both ESPN and Rivals, as well as a three-star prospect by 247Sports … Ranked No. 82 nationally, including seventh in the state and No. 13 nationally by ESPN … Tabbed No. 94 overall by Rivals and No. 148 by 247Sports, placing No. 82 on the latter’s composite list … Named an FACA 2A All-State honoree as a senior … Led his team to a 20-8 mark and an appearance in the 2A regional semifinals that year.

Personal: Full name is Keith Martin Stone … Nicknames are K-Stone and K-Smooth … Born Aug. 25, 1997 … Parents are William Stone and Julia Nero … Has an older brother, Jeremy, and a older sister, Kira … Wears No. 4 because it was his number his last year of AAU basketball and as a dedication to someone close to him … Graduated from the University of Florida in May 2018 and pursuing a master’s degree in liberal arts at Miami … Favorite athletes are Carmelo Anthony and Jamal Mashburn … Best sports memory is hitting a game winner against Ocala High School … Chose Miami because it is close to home and he loved both the staff and the players … Committed to Miami over Arizona, Arkansas, Maryland, Nevada, USC and others.