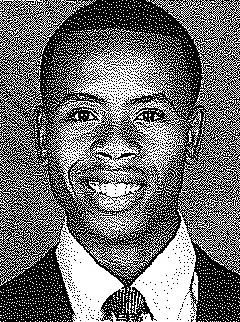 Junior college transfer who will battle for playing time at both point guard and shooting guard … Versatile player who adds depth to the Hurricane backcourt… A scorer who has the unique ability to create his own shots … Is a tough player to defend… is a tremendous shooter who can hit from long range or penetrate and dish … Selected Miami over Florida State, DePaul, Maryland and Georgia.

Junior College: Brevard Junior College … First team NJCAA All-America after averaging 27.5 points, 5.3 rebounds, and 2.4 assist per game … Scoring average was tops in the nation among Division I junior colleges and ranked No. 2 in the nation in scoring among all junior colleges … Named the Southern Conference and Florida Junior College Player of the Year in 1999-00 … Shot 337-of-696 (.484) from the field including 129-of-290 (.445) from the three-point range, and 186-229 (.812) from the line … Set school single season scoring records for scoring average and three-point field goal percentage … Scored over 50 points on two occasions … Led Brevard to a 29-7 overall record, the Southern Conference regular season title and the NJCAA Region VIII Tournament Championship … Team ended the season ranked ninth in the nation … Led team to its first undefeated conference record (12-0) in 30 years …Coached by Don Smith.

High School: Palm Bay … All-Conference, All-District, team MVP and team captain and a junior and senior … Averaged 20 points, five rebounds, three assists and two steals per game as a senior … Averaged 23 points per game as a junior in earning All-State honors … Holds Palm Bay records for three-pointers in a game (9) and most points in a game (42)… Coached by Bryan White.