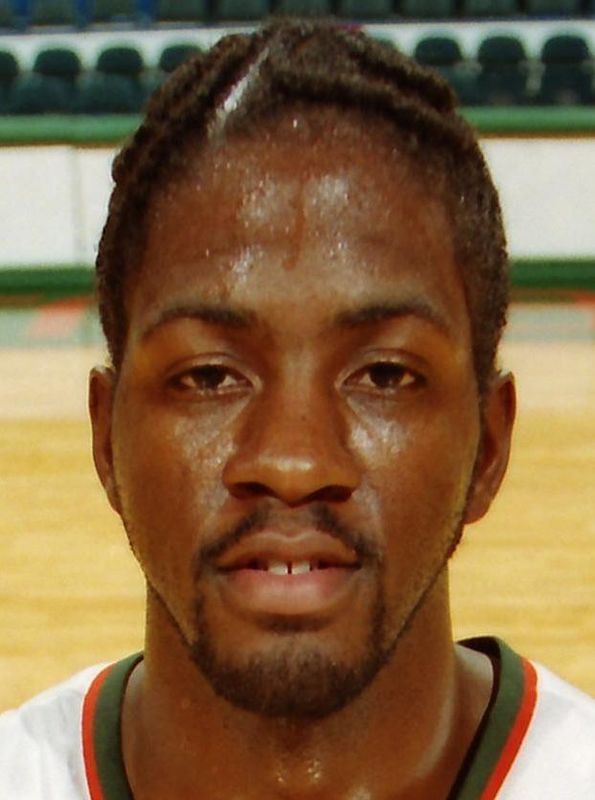 Played in all four games, making two starts… averaged 10.0 points and team-high 9.3 rebounds per game… shot 17-of-24 (.708) from the floor… recorded double figure rebound totals in three of the four games.

One of only three players (Kevin Norris, Tim James) to see action in  all 28 games… ranked sixth on the team in scoring (4.1 ppg) and led Miami’s freshman class in minutes played (11.1 mpg)… led team in field goal percentage having hit 46-of-75 (.613) field goal attempts and tied for second on team with 15 blocks… scored in double figures twice. In the Regular Season: Returned home to Boston and recorded two points and three rebounds in 16 minutes of action against Boston College (1/28/98)… recorded a career-high 13 points to go with five rebounds one assist and one block in 18 minutes against Villanova (1/22/98)… was 5-of-7 from the field and 3-of-3 from the line… scored 11 points and recorded five rebounds and two blocks against West Virginia (1/10/98)… was 3-of-4 from the field and 5-of-7 from the line in 19 minutes… recorded five points, three rebounds, and a career-high three steals, in 15 minutes of work against Connecticut (1/6/98)… recorded eight points, one rebound, one assist and one block in 11 minutes off the bench at Seton Hall (12/31/97)… recorded nine points, four rebounds, and two blocks in 14 minutes off the bench against Eastern Kentucky (11/24/97)… played in first collegiate game recording six points in eight minutes against Southern Illinois (11/14/97) In the BIG EAST Tournament: Came off the bench in Miami’s BIG EAST Tournament game against Georgetown (3/4/98) and recorded three points and four rebounds in 15 minutes… hit his only field goal attempt and was 1-of-2 from the line. In the NCAA Tournament: Played 16 minutes in Miami’s NCAA tournament game against UCLA (3/13/98) and recorded four points and three rebounds.

High School: West Roxbury High School… Massachusetts Gatorade Player of the Year… named the Boston Public League City MVP after averaging 22 points, 13 rebounds, nine assists and four blocked shots his senior year… earned team MVP honors… was an All-Scholastic selection of both the Boston Globe and Boston Herald… named to Street & Smith’s Boston All-Metro team… rated the eighth best center prospect in the nation by Hoop Scoop… led West Roxbury to a city championship and semifinal berth in the state playoffs with a 19-3 record… played four years on the varsity, the final three years as a starter… was an honor roll student each of his four years… coached by Thomas McNair, Jr.