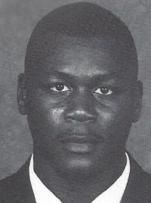 Played in all four games, making one start… averaged 7.0 points and 4.8 rebounds per game while connecting on 11-of-19 (.579) from the field… had four points, five rebounds and one block in the tour opener against Boca Juniors… had six points, four rebounds, one assist and one steal in Miami’s win over Andino Sports Club… scored a tour-high 10 points, on 4-of-5 shooting from the floor, and four rebounds against the Argentine National Team… made only start in the tour finale against Welcome Athletic Club and registered eight points, six rebounds, one assist and two steals.

High School: St. Thomas Aquinas High School… was Class 5A All-State Selection as a senior… named a Street& Smith preseason All-American and a Blue Ribbon honorable mention All-American heading into his senior campaign… earned first-team All-Broward honors after averaging 19.1 points and 14.3 rebounds his junior year… led St. Thomas to a 23-9 record and a regional final appearance in the state tournament as a junior… named to the All-Tournament team in the Kruel Holiday Classic… tabbed as Team MVP twice… named MVP of the Boca Raton Christmas Tournament in 1996… MVP of the State All-Star game in Daytona Beach in 1996… coached by Steve Strand.