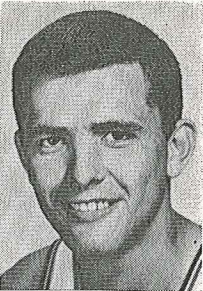 Rodgers is the hard luck athlete of UM’s basketball squad. He started playing basketball in the fourth grade, had two fine high school years playing center and seemed headed for All-State honors in his senior year when a broken wrist knocked hi out of action. Though sitting out a considerable part of the season, he still wound up with honorable mention All-State. Dan was making a definite bid both at guard and forward on Miami’s squad last year when a leg injury in the 10th game halted his progress. He attempted to play several times later but the leg did not hold up and Dan is a question mark this season. If the Kentuckian can throw off the injury bugaboo, he could help the Hurricanes in a big way. He’s a good shooter and excellent rebounder. He has the physical qualifications for the “sixth man” role. Rodgers’ high games a year ago were nine rebounds against Jacksonville, seven points against Pennsylvania.