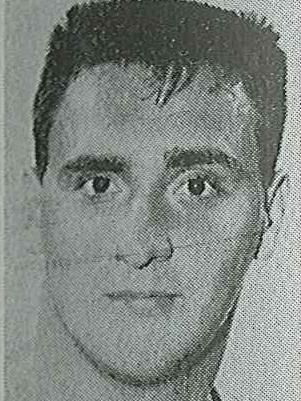 Junior: Grob started off well and had at least an even chance to wrest the first string job away from Don Patrician but an injured arm kept him out of seven on Miami’s first 10 battles and allowed him only short action in the next two. Charlie once seemed on his way with back to back 11 point performances against Miami of Ohio and Oklahoma City, but he slipped up again and not until an eight point showing against FSU in the season finale did he lend much help to the team.

Sophomore: center from Roselle Park, NJ . . . Business Administration . . . nickname, Charlie . . . age 22 . . . hgt. 6-8 . . . wgt. 245 . . . letters earned, 2 . . . Starting slowly, Charley scored only two points during the first five games but improved from then on in and wound up the year with a 4.2 scoring average and 87 rebounds. His best scoring and rebounding games since joining the varsity team resulted during the 1963-64 season as he tallied 13 points against Florida Southern. His top rebounding game was against Florida Southern College.

Personal: Grob comes from the same area which produced the fabled Hurricane All-American, Rick Barry. He’s married and the father of a girl. His wife is an outstanding pianist.