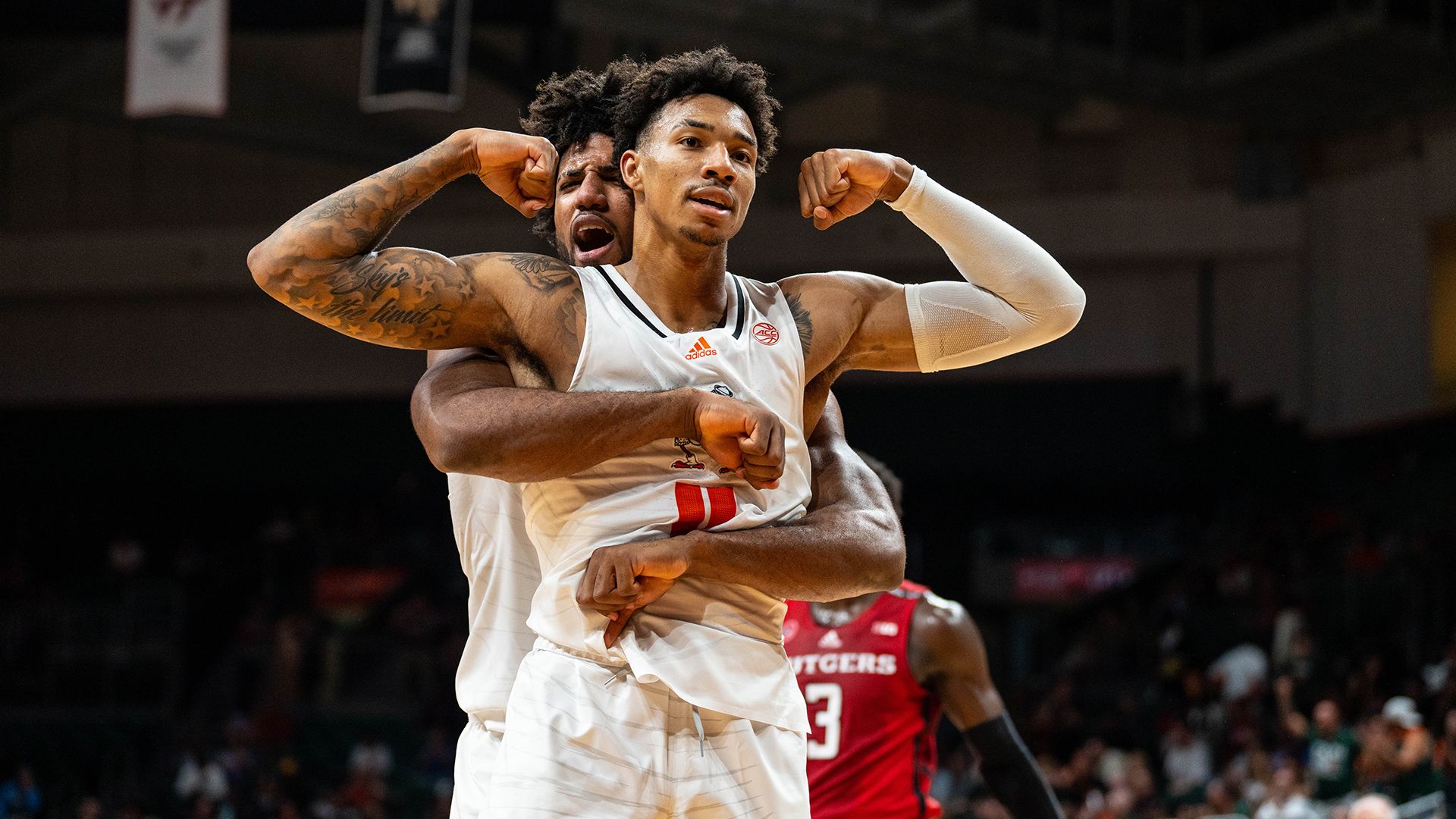 Fifth-year senior guard Jordan Miller and third-year sophomore forward Norchad Omier co-led all scorers with 17 points for Miami (7-1) in front of a raucous crowd at the Watsco Center.

After the Hurricanes took a five-point lead midway through the first half, Rutgers (5-2) went on a 16-6 run that included four straight 3-pointers to take a 26-21 edge with 5:30 on the clock.

The teams split the next six points and then Miami went on a 9-2 run to go in front, 33-31, with 1:20 left in the frame after Miller hit the team’s first and only 3-pointer of the session. The Scarlet Knights answered with a three-point play at the other end and took a 34-33 advantage into the locker room.

Rutgers opened the second half on a 13-2 run, including scoring the opening nine points, to make it a 15-2 extended surge and grab a game-best 11-point lead, 46-35, with 16:39 to go. Junior forward Clifford Omoruyi had 10 points and four rebounds in the first three-and-a-half minutes of the frame.

Rutgers leveled the score at 61 with 2:45 to go, but never went back in front. Miami scored the final seven points to take its largest lead of the evening and held on for the victory, improving to 8-1 over its last nine games in the ACC/Big Ten Challenge.

Miller, who shot 6-of-11 overall and 3-of-6 beyond the arc, grabbed a game-best 10 rebounds to post his 10th-career double-double. Omier, who went 6-of-8 from the floor and 5-of-6 at the line, finished just shy of a third straight double-double of his own, pulling down nine boards.

Wong, who hails from the same city as Rutgers, Piscataway, N.J., scored 16 points on 7-of-12 shooting, added a co-game-high four assists, a career-high-tying two blocks and two steals.

Thank U Canes for showing up and showing out!!! 🙌 pic.twitter.com/d1uypTaPKd

Up next for the Hurricanes is a trip to Louisville, Ky., for the start of ACC play, as they play Sunday at 1 p.m. against Louisville, live on ACC Network from the KFC Yum! Center.

MIAMI HURRICANES POSTGAME NOTES
– The Hurricanes conceded only 11 points in the final 14 minutes of the game, including just seven over the last 11 minutes.
– From the 9:58 mark to the 4:52 mark of the first half, a span of just over five minutes, Rutgers attempted five 3-pointers and made all of them, including Hyatt posting a 3-of-3 clip.
– The Scarlet Knights made five of their first six 3-point tries and finished 5-of-9 in the first half, while the Hurricanes missed each of their first seven and went just 1-of-9 before the break.
– Miller (10), Omier (10) and Wong (nine) combined for all but four of the Hurricanes’ first-half points, while sophomore guard Wooga Poplar had the other four.
– With the ACC/Big Ten Challenge now finished for good, Miami finished the event with a 10-6 record, including a 10-3 mark in the last 13 years, an 8-1 tally over the last nine years, a 9-3 ledger under Jim Larrañaga, a 5-2 record at home and a 4-4 tally on the road.
– The Hurricanes are the only team in either league to win eight ACC/Big Ten Challenge games over the final nine years (2014-22) of the event.
– Miami improved to 6-1 in its last seven games trailing at halftime, including 3-1 this season.
– The last time the Hurricanes won a game after trailing by double digits was 3/5/22 at Syracuse, when they faced an 18-point deficit in the second half.
– With his 703rd victory, Larrañaga surpassed Larry Hunter for sole possession of the No. 33 spot on the all-time wins list among Division I head coaches.
– Miller’s 10 rebounds and 37 minutes set season highs, while his three assists and three made 3-pointers both matched his top marks on the year.
– Third-year sophomore guard Nijel Pack scored all eight of his points in the final 6:19, hitting a game-tying 3-pointer at that time and a game-clinching 3-pointer with 24 seconds left.
– After recording zero total blocks in the first 41 outings of his career, Poplar notched two in the first half alone Wednesday.
– Sophomore guard Bensley Joseph set a career high with three steals. 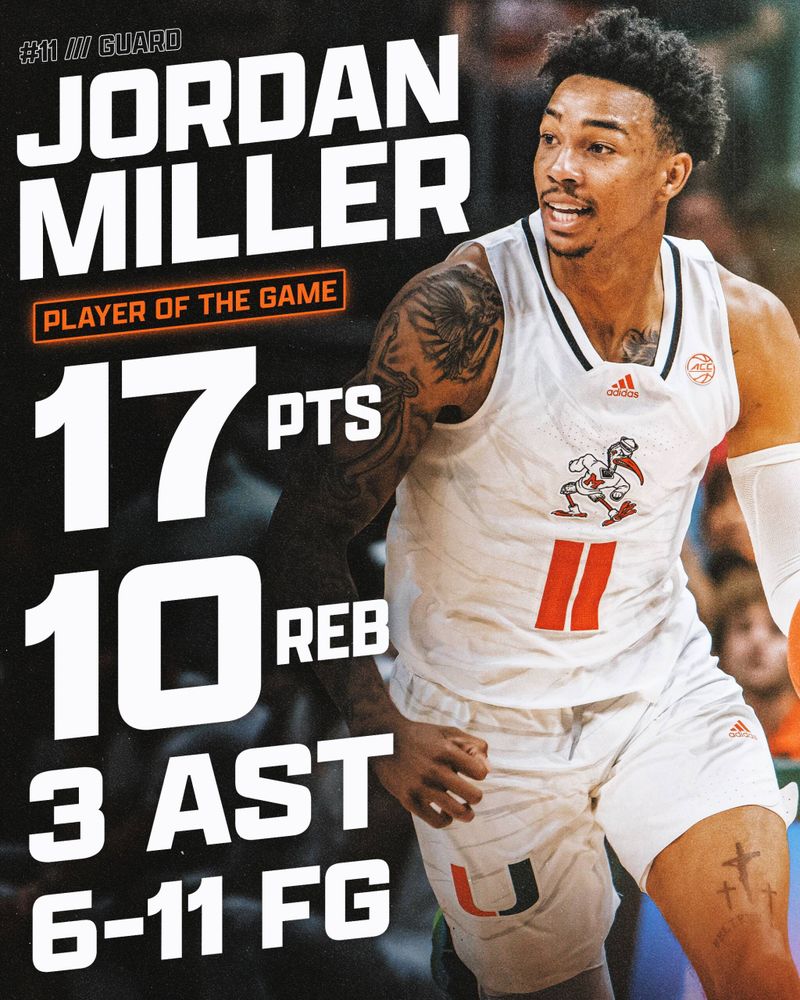