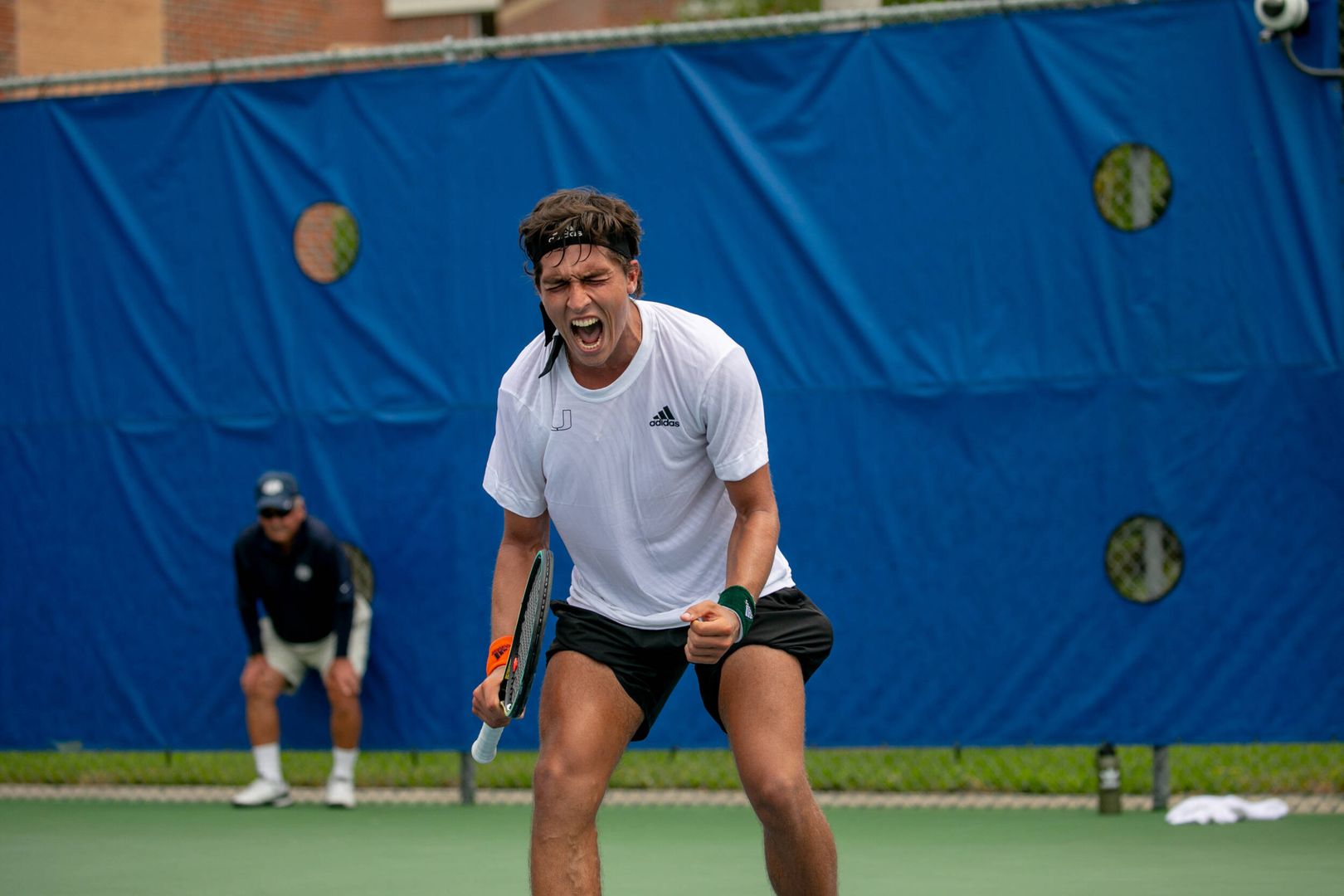 Miami Bests USF in First Round of NCAA Championship

GAINESVILLE, Fla. – The University of Miami men’s tennis team is moving on to the second round of the NCAA Team Championship after pulling off a 4-3 comeback victory over the No. 45 South Florida Bulls (14-11), Friday afternoon at the Alfred A. Ring Tennis Complex.

With their backs against the wall, down 3-1, the Hurricanes (17-9, 5-7 ACC) persevered and ground out three victories at first, fifth and sixth singles to complete the comeback.

“I am super excited for the guys and super happy that our team got an NCAA Tournament win against a tough South Florida team,” head coach Aljosa Piric said. “A lot of credit goes to [USF]. They are a very tough team to play against. They are well-coached and we have a lot of respect for them.”

The match was ultimately decided on court five, where freshman Martin Katz was forced to a third-set after coming up short in the second set tiebreak, 6-7(5). However, Katz used the second-set defeat as fuel for the final session, dominating the court to the tune of a 6-0 third-set win to clinch the match for the Hurricanes.

Miami moves to 17-28 all-time in the NCAA Team Championship and is advancing to the second round for the first time since 2018. 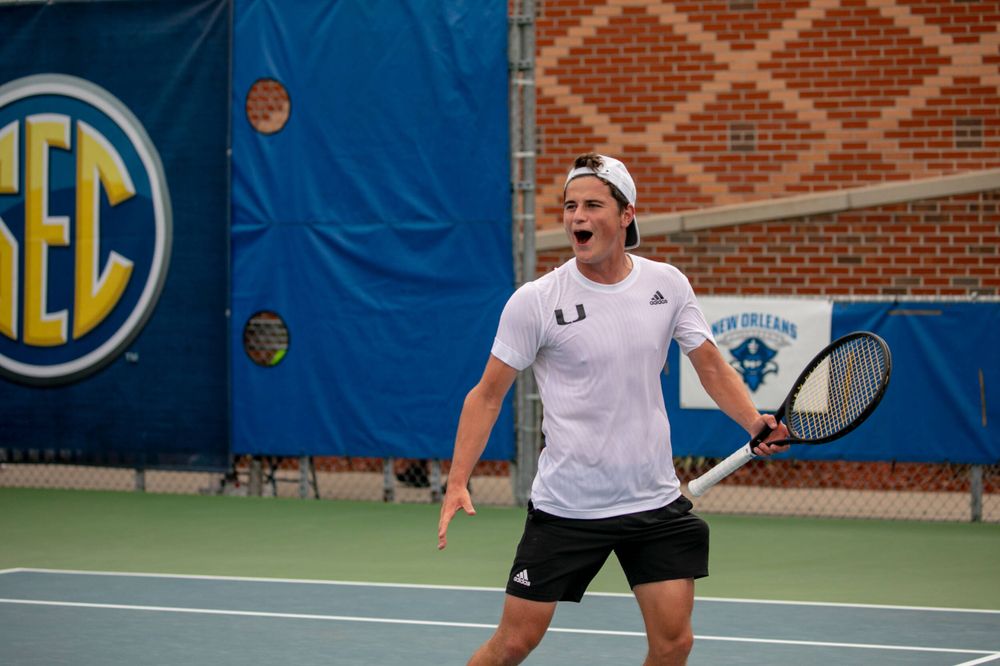 South Florida took an early 1-0 lead in the match after clinching the doubles point with victories on courts one and three. At first doubles, fourth-year juniors Franco Aubone and Juan Martin Jalif fell to the No. 43 duo of Rithvik Bollipalli and Bruno Oliveira, 3-6, while fifth-year senior Bojan Jankulovski and graduate student Dan Martin came up short, 4-6, on court three.

At the time of clinching, fifth-year senior Benjamin Hannestad and Katz were in a 5-6 battle with South Florida’s Chase Ferguson and Ivan Yatsuk on court two.

Alvin Tudorica extended the Bulls’ lead to 2-0 with a 6-1, 6-2 win on court four over Miami’s Jalif. At third singles, Hannestad responded for the Hurricanes, taking down Antonio Muniz 6-3, 6-4 for Miami’s first point of the day.

“[South Florida] had us on the ropes for two-thirds of the match, but our guys hung in there and we got a critical win from [Benjamin Hannestad] at number three that gave us belief,” Piric said.

The Bulls regained a two-point lead when Ferguson defeated Jankulovski, 6-4, 6-4, at second singles.

Despite being down 3-1, the match was very much in reach for the Hurricanes, as they led on all three remaining courts. Martin started the Miami rally with a comeback of his own, marching to a 4-6, 6-0, 6-3 win at first singles.

On court six, Aubone put on a show for the fans in attendance, rallying from down 2-4 in the first set to take a 5-4 lead. However, South Florida’s Oliveira quickly rattled off two games to move back on top, 6-5, in the match.

Yet, Aubone would not be denied, mounting his second comeback of the set to force a tiebreak, which he ultimately won, 7-6(4). The Argentina native carried that momentum into the second set, tying the overall match at three-all with a 7-5(4), 6-4 win at sixth singles.

With the match knotted at three, all the pressure fell on the shoulders of one of Miami’s two freshmen, Katz. The Belgium native was born for this moment and he did not concede a game in the final set, winning on court five, 6-4, 6-7(5), 6-0, to send the Hurricanes to the second round of the NCAA Team Championship.

The Hurricanes will square-off with the No. 2 Florida Gators on Saturday after the second-seeded Gators downed New Orleans, 4-0, in their first round contest.

“We are looking forward to playing tomorrow,” Piric said. “We are going to recover and try to be at our best tomorrow because we have a tough opponent in Florida. They are probably the best team in the country, but we are excited to play them and we are going to go for it.”

Miami is seeking redemption on Saturday as it was knocked out in the second round the last time these two squads met in the NCAA Team Championship in 2018.

Saturday’s match will begin at 5 p.m. at the Alfred A. Ring Tennis Complex. Fans can follow the match via live stats on the Florida website or via a live stream on the TennisONE app.