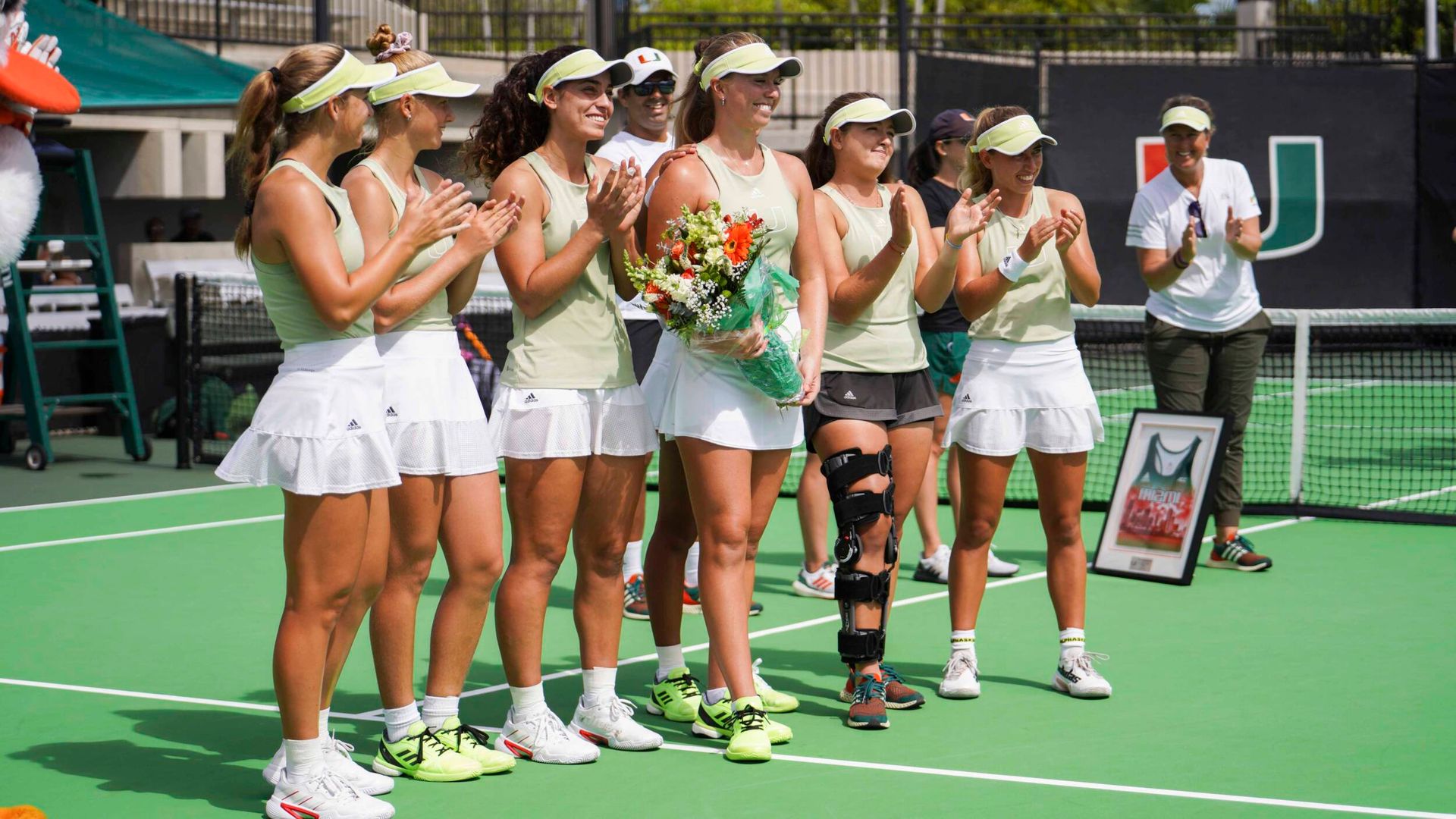 CORAL GABLES, Fla. – The University of Miami women’s tennis team wrapped up its 2022 regular season Sunday with a 7-0 sweep of Boston College at the Neil Schiff Tennis Center.

For No. 14 Miami (16-4, 10-3 ACC), it marked the team’s third consecutive shutout, as it outscored opponents 18-0 over the final three matches of conference play. The Hurricanes did not lose a single set in any of the three contests, en route to their first stretch of three straight sweeps in over seven years.

“After our Notre Dame/Louisville trip, we just decided to kind of get back to work and focus. We had to brush up on a few things on-court,” Miami head coach Paige Yaroshuk-Tews said of the strong close to the regular season. “I think the kids have done it; just getting back up on the baseline, taking some more chances and not playing so defensive. We had to figure out our [pair at number] two doubles and I think the team had to kind of get used to the vibe of having another kid in the lineup. I think that they’ve done a great job and Tati has done a great job.”

The Hurricanes opened the day by notching a win in a top-40 doubles showdown. Miami’s No. 28-tandem of fourth-year junior Daevenia Achong and fifth-year senior Eden Richardson, on her Senior Day, rolled to a 6-2 decision against No. 37 Marice Aguiar and Laura Lopez.

The Hurricanes got their first two singles win in a span of seconds, with each player needing just 13 games to do so.

Approximately 15 minutes later, Miami again had simultaneous match points and closed them both out.

Tahan provided the clincher by downing 6-2, 6-2, sealing a double-digit win total in ACC play for the Hurricanes. Just moments after, No. 80 Pfennig concluded a 6-2, 6-1 triumph over Plipuech, upping the advantage to 5-0.

Both remaining matches were played out, with No. 50 Richardson’s the first to end. The Bath, England, native posted a 7-5, 6-0 decision against Aguiar in the final regular season match of her collegiate career, extending the lead to 6-0.

“If I was asked if I wanted an Eden Richardson, I would do it all over again and take her. She has brought so much more to this team than simply being a great tennis player,” Yaroshuk-Tews said. “She’s a great singles player, she’s a great doubles player, but she’s even a better person. She’s light, she’s fun, she’s hard-working and she cares about her team a lot and she cares about this program a lot. To find a kid like this who just jumps in for a fifth year and just meshes the way she has, I don’t think it’s easy to find. So, we got pretty lucky.”

It took another 30-plus minutes for the final match of the day to end, but when it did, the Hurricanes completed their fourth 7-0 triumph of the season. Boch-Collins topped Edwards, 6-4, 7-5, in the last competition.

Sunday’s decision marked the 160th sweep of Yaroshuk-Tews’ 21-year head coaching career, including the 103rd since 2009 and the sixth this year. It also improved the Hurricanes to 27-2 all-time versus Syracuse, including a perfect 19-0 at home.

The last time Miami posted three consecutive sweeps was early in the 2015 season, when it notched back-to-back-to-back 7-0 decisions to begin ACC play. Yaroshuk-Tews’ team beat No. 53 Wake Forest on Feb. 27 and No. 14 Clemson on March 1 at home, then won at No. 67 Syracuse on March 6.

The Hurricanes will now travel to Rome, Ga., for the ACC Championship, at which they will be the third seed and have a double-bye. Miami will begin play Friday at 6 p.m. against a to-be-determined opponent at the Rome Tennis Center at Berry College.