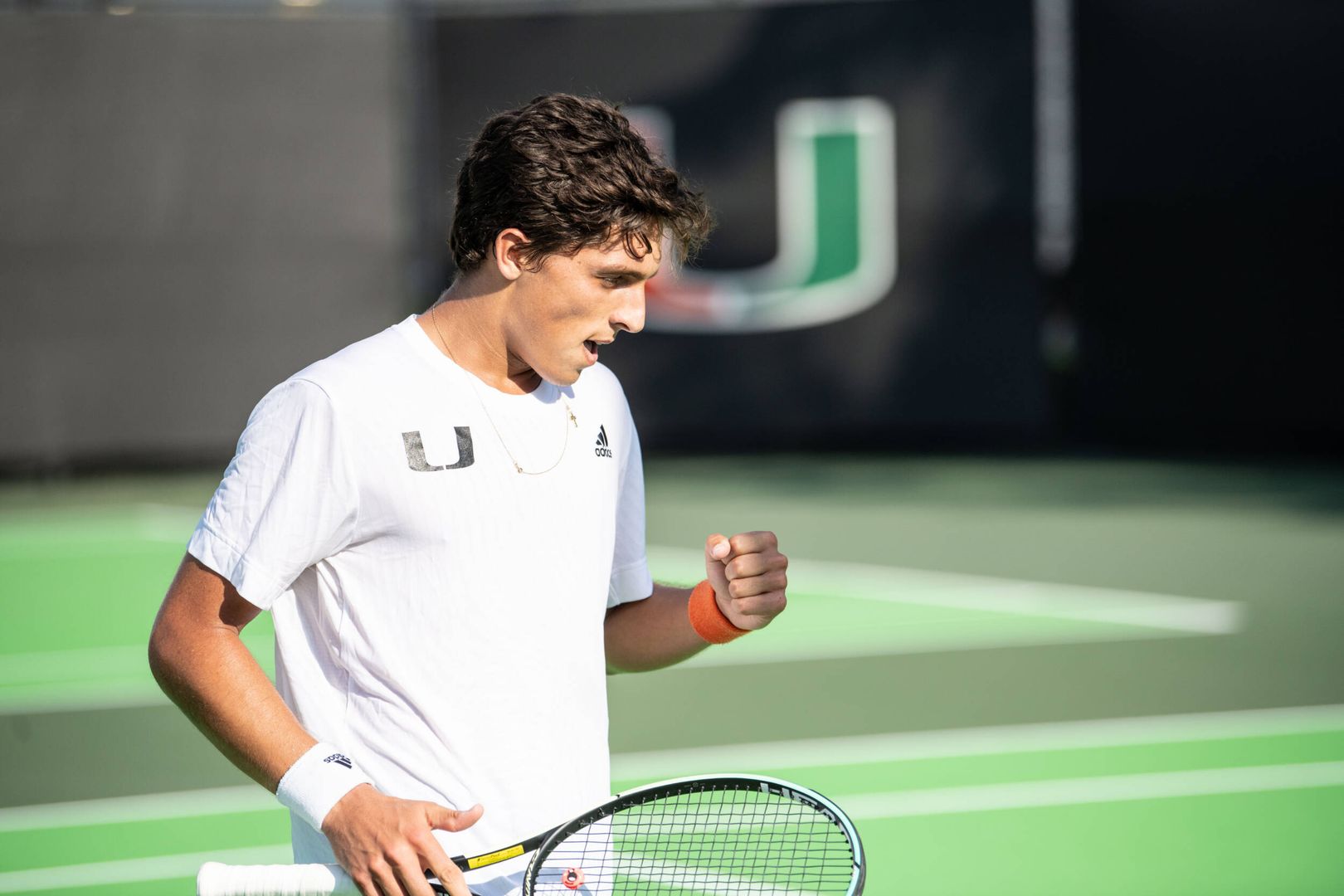 CORAL GABLES, Fla. – The University of Miami men’s tennis team bounced back in a big way on Wednesday, downing No. 30 Florida State, 4-0, at the Neil Schiff Tennis Center.

The No. 36 Hurricanes (13-6, 2-5 ACC) have won four straight matches against the No. 30 Seminoles (12-7, 4-2 ACC) dating back to 2019, including three sweeps of the team from up north. Wednesday’s victory marks Miami’s third win over a top-30 opponent this season and fourth over a ranked team.

Graduate student Dan Martin and fifth-year senior Bojan Jankulovski set the tone early for the Hurricanes when they cruised to a decisive 6-0 victory at third doubles to tally Miami’s first doubles point of the day.

Despite being down 2-5 with the doubles point on the line, fourth-year juniors Franco Aubone and Juan Martin Jalif stayed composed on court one, slowly working their way back into the match. The pair fought for every game and ultimately prevailed, 7-5, at first doubles to clinch the doubles point and give Miami an early 1-0 lead.

Since becoming a doubles team in early March, Aubone and Jalif hold a 4-0 overall record and a 3-0 mark in the top doubles spot.

On court three, Hannestad quickly put the Hurricanes up 2-0 when he handily defeated Florida State’s Richard Thongoana, 6-3, 6-2. Jankulovski followed that up with his 11th singles win of the season, a 6-3, 6-1 victory on court two against Andreja Petrovic.

Jankulovski is one of three Hurricanes to reach double-digit wins in singles dual match play this year. He is joined by Martin (11-3) and Katz (12-4), while Hannestad is just one win shy at 9-6.

The match would ultimately be decided on court six where Aubone went game-for-game with Florida State’s John Bernard. The San Juan, Argentina, native posted a resounding 6-1 victory in the first set but had to work for the match-clinching win.

At one point in the second set, Aubone trailed, 3-5, but he dug deep and rallied to tie the match at six-all. Forced to a tiebreak, Aubone and Bernard traded points with neither player holding more than a two-point lead in the tiebreak.

Eventually, Aubone willed his way to victory, taking down Bernard 6-1, 7-6 (9-7) to clinch the sweep for the Hurricanes.

The Hurricanes are back on the road on April 1 when they take on the Boston College Eagles in Chestnut Hill, Mass. First serve is set for 11:30 a.m.