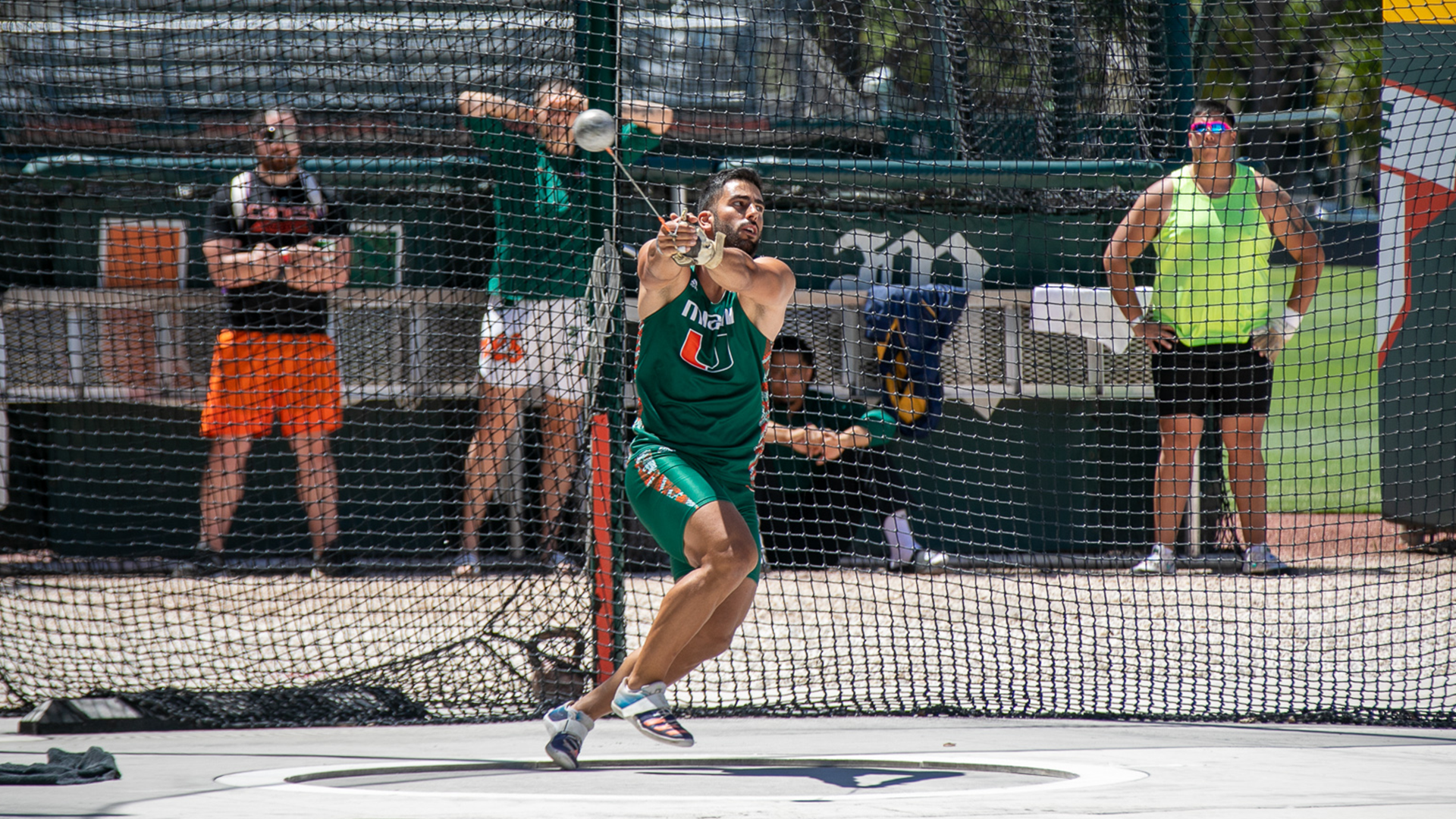 Each earning a win in their respective event, Robinson broke his previous program triple jump record with the current NCAA-lead of 16.23 meters. His previous mark of 16.03 meters was set at just under a year ago.

Andrade, making his outdoor Miami debut, threw 71.76 meters to best the previous mark of 71.07 meters set by Kevin Arreaga in 2019.

“I thought we competed hard today,” said director of track and field and cross country Amy Deem. “We just have to keep working through the process, trust the process. There were a lot of really good results in the field events, so I am really pleased with where we are. Russell just continues to get better and better. Our throwers as a unit are performing at a really high level. We just have to keep building as a team and get better every week.”

The Canes posted winning marks in five other field events.

Isaiah Holmes, in his first outdoor meet of the season, claimed the long jump title with a 7.83-meter result, the third best in Miami history and current top-three NCAA mark. Holmes added a second-place finish in the high jump at a height of 2.11 meters.

On the women’s side, the trio of Hannah-Sophia Hall, Debbie Ajagbe and Ashley Moore paced the Hurricanes in the field. Improving on her third-best program shot put mark, Hall tallied the winning throw at 16.75 meters and current top-five Division I throw.

Fellow thrower Ajagbe notched two wins on the day. She opened her day by hitting 57.47 meters in the hammer throw and capped the day off with a discus throw of 57.10 meters. Ajagbe’s discus mark places her in the top-three of the NCAA.

Moore earned her first win of the 2022 outdoor season. She notched a 12.85-meter triple jump, a top-10 NCAA mark, to be crowned the winner.

In the track events, Miami claimed victories in four events.

The duo of Daphnee Lavassas and Justin Rittenhouse took home winning times in the women’s and men’s 1500-meter race. Lavassas clocked in at 4:25.27, the third-best time in program history, while Rittenhouse paced to a finish of 3:57.62.

Alfreda Steele was the first athlete to cross the finish line in 23.22 in the 200 meter, resulting in a top-five time in the nation.

Ayman Zahafi registered a 1:47.44 finish in the 800 meter to earn the win, the third-fastest time in school history. His time is currently a top time in the country this year.

Miami’s final win on the track came courtesy of the women’s 4×400 meter relay clocked a top 10 NCAA time. The quartet of Blanca Hervas-Rodriguez, Kayla Johnson, Moriah Oliveira and Kennedy Brace won with a time of 3:35.92.

In the men’s 4×400 meter relay, the team of Solomon Strader, Khamal Stewart-Baynes, Davonte Fuller and Zahafi ran the 22nd best NCAA time and eighth fastest time in the East Region at 3:08.89 to finish second.

Next, the Hurricanes will travel North to Gainesville for the Florida Relays, Apr. 1-2.