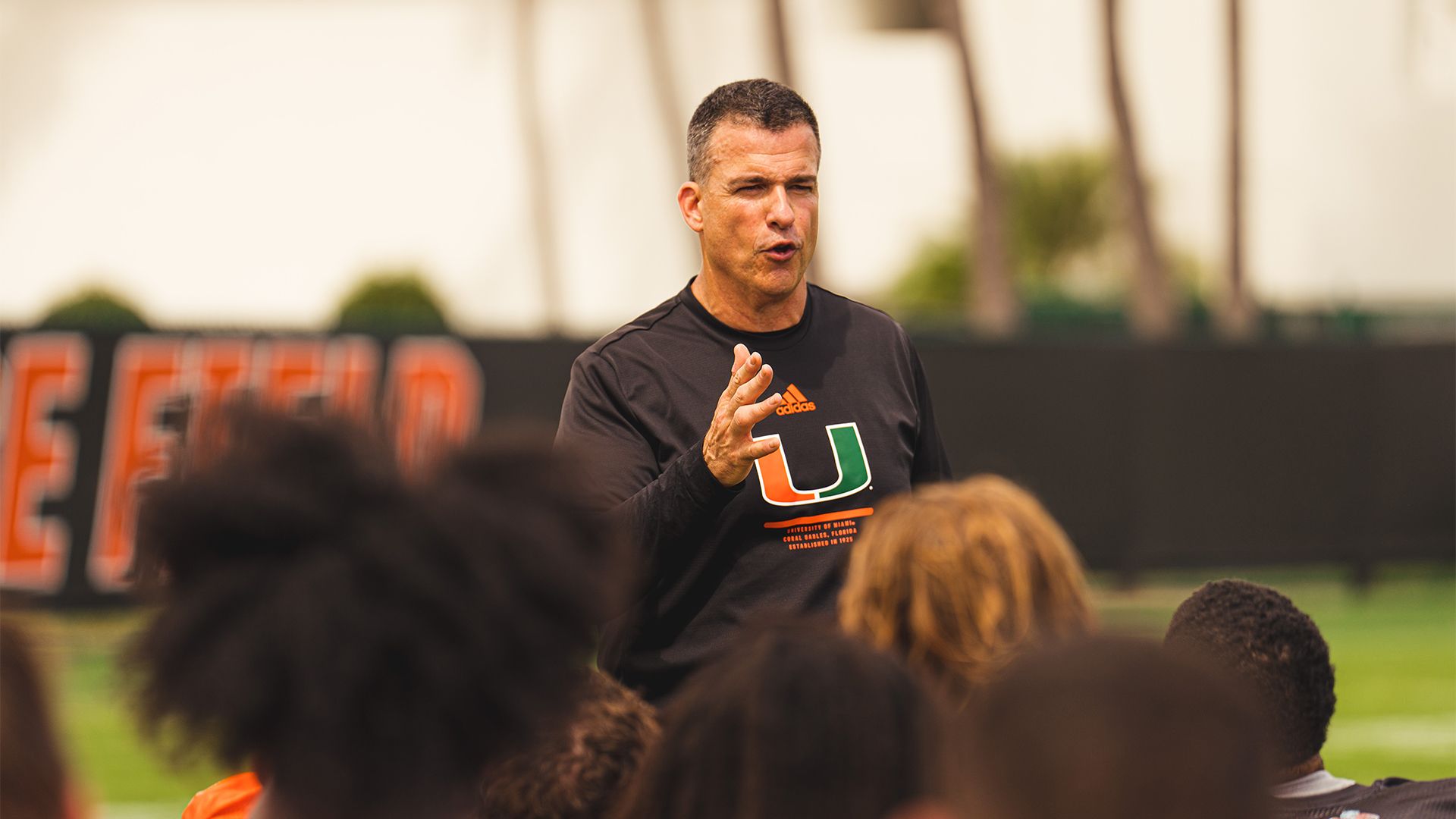 "The Excitement is Through the Roof"

CORAL GABLES, Fla. – In so many ways, it marks the start of a new season.

But on this particular morning, the first day of spring football practice signaled so much more.

It was every bit a new beginning for Miami’s players, some of whom were back on the field after dealing with injuries or who now find themselves the veteran leaders of the team.

But it was a homecoming, too, for a former Hurricanes offensive lineman who won two national titles at Miami and on Monday, returned to Greentree in a role he’d once only dreamed of having: head coach of the Miami Hurricanes.

“Yeah, it’s pretty insane. That’s pretty insane,” said Mario Cristobal, who returned to his alma mater as its new coach last December and presided over his first practice Monday. “Now, it’s the first hundred days. I think it was…yesterday or today where a hundred days actually kick in. Oh man, it still hasn’t set in. But what did set in is that this journey began 25 years ago. Twenty-five years ago. I’m like ‘Wow.’ That first meeting with [former head coach Butch] Davis upstairs led to this opportunity.

“So, yeah, the excitement is through the roof and through the stratosphere to be able to get after it, always keeping in mind that we’ve got to teach and teach and teach and then teach some more as we mentor. But just keeping the focus on them. I’ll focus on my stuff someday. Maybe in, I don’t know, July when we could have things settle down a little bit and then reflect. But no, without a doubt, this is…it is absolutely, man, it’s awesome.”

The day, as special as it was for both Cristobal and the Hurricanes, was also bittersweet.

Not long after Miami wrapped up its first of 15 spring workouts, Cristobal left campus to attend a memorial service for his mother, Clara, who passed away last week.

The coach noted that his presence on Greentree on Monday was a tribute to her and the way she raised her sons, including Cristobal’s older brother, Luis, who also played at Miami.

“It’s exactly what she wanted. Services are today and this is exactly, exactly what she wants,” the coach said after a brief pause to gather his composure. “So, it’s all good. Again, the energy being around these guys, the enthusiasm, it’s very real and they know that I go. I just go. And so today’s about going and moving forward and making sure that everything that was ever taught to us, my brother and I, that that’s always carried on in our daily doings…”

Cristobal continued, “The coaches are asking ‘What are you doing here?’ I’m like ‘I’m doing what I’m supposed to do. Job’s not done. Job’s not finished.’ And that’s what we are supposed to do. Best part about her, she’s relentless, tireless. There’s just no give. She’s going to finish everything and that’s what we do. That’s the way we’ve been raised. So I think it’s good. I think it was incredible to be on Greentree today, man.”

And Cristobal was very much all over Greentree throughout his first practice.

The coach moved from position group to position group and from drill to drill, lending his expertise, providing support and taking in the work being done all around him.

His drive – and the motivation from the rest of Miami’s staff – players said kept the Hurricanes going throughout a two-hour practice under the warm South Florida sun.

“It was a great day today. There’s a lot of stuff to work on still, some little missed assignments that we need to get more detailed on, but other than that, I thought we had a good practice,” said quarterback Tyler Van Dyke, the ACC Rookie of the Year who threw for 2,931 yards and 25 touchdowns while completing 62 percent of his passes last season. “Guys were working hard, great effort…It’s special. Every time we get the opportunity to go out there and play, it’s always a blessing. You go out there with your teammates and do what you love to do. You couldn’t ask for me. And yeah, Coach Cristobal’s first time in like a set practice out there. It was pretty cool. He’s one of the top coaches in the country. We’re really excited he’s here.”

Added defensive end Jahfari Harvey with a smile, “We got that [energy] from all the coaches, making us work, how it’s supposed to be. [They’re] getting on us, coaching us hard. A whole bunch of, how do I say it? Getting on our tail today.” 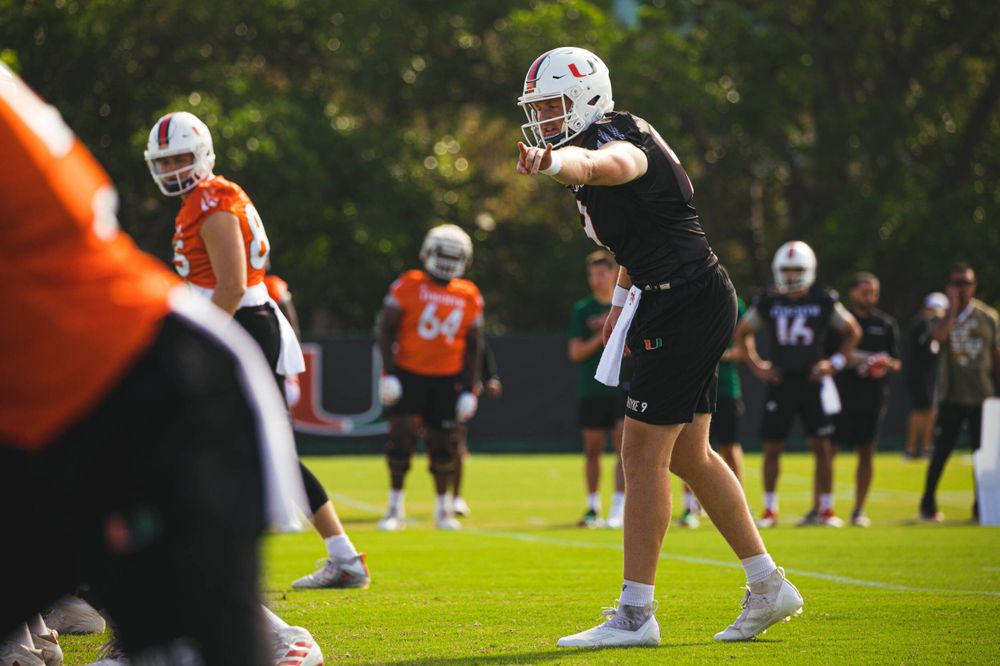 Garcia underwent season-ending surgery not long after the game and could do little more than watch from the sideline as the Hurricanes finished the season.

Being back on Greentree, being able to run and throw, was something he said he didn’t take for granted, given all the rehabilitative work he’s done since his injury.

“It felt great to be out there again with my teammates,” Garcia said. “It’s a long off-season and after my surgery, I tried not to mentally check out. You’ve got to stay locked in on that. But it was a long offseason for me. Just remembering why we do it, remembering why it’s so fun going out there on Greentree and having my teammates around, the adrenaline rush that you get, that’s something that’s not comparable to anything. It just feels amazing to get back.”

And Garcia, like many of the Hurricanes, took their cues Monday from their head coach.

Cristobal’s energy, they noted, made a difference. The fact that being on Greentree seemed a personal mission for him was noted, too.

Now, it’s time to take his guidance and do the work needed to make the Hurricanes the team they and their coach want them to be.

Said Cristobal, “Greentree is sacred ground and when we step on that field, we’ve got to understand that; that every time we step out on that field, nothing but our very best will be good enough. It doesn’t mean that the plays are perfect or the technique is perfect. But it means that every ounce of what we have has to be poured into what we do and that’s got to be the secret sauce of the Miami Hurricanes. It always has been, the way we work and the way we practice.”