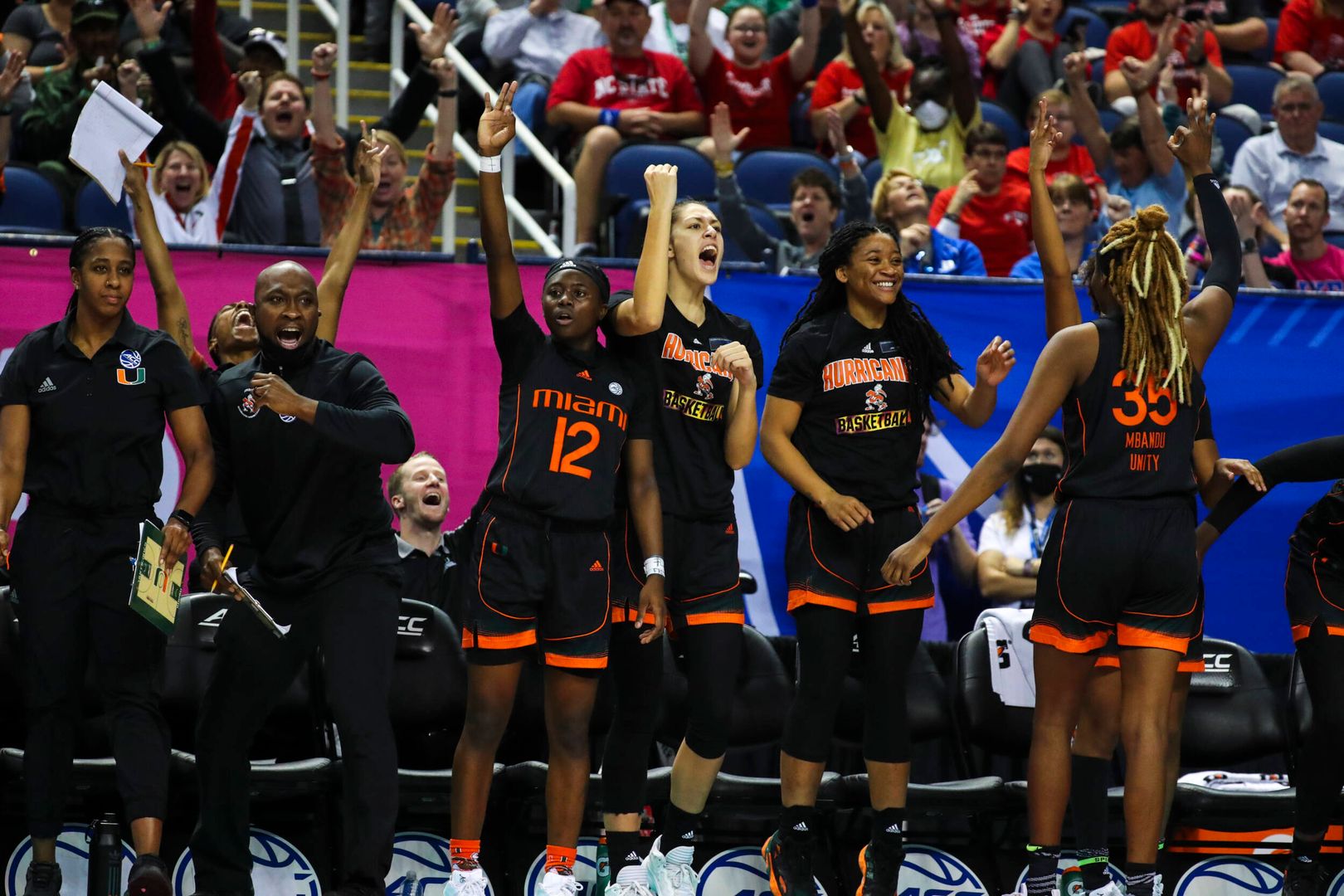 GREENSBORO, N.C. – The University of Miami women’s basketball team is headed to its first ACC Championship title game in program history after downing the No. 20 Notre Dame Fighting Irish (22-8, 13-5 ACC), 57-54, Saturday afternoon at the Greensboro Coliseum.

The Hurricanes (20-11, 10-8 ACC) have won three games in three days en route to a title game berth, including back-to-back victories over top-25 opponents. Miami has come close to playing in the ACC Championship, making three semifinals appearances before this season, but never completed the bid.

Miami is just the second seven-seed to make it to championship Sunday, following in the footsteps of the 1992 Georgia Tech Yellow Jackets. The Hurricanes are looking to become the first seven-seed to cut down the nets in Greensboro, N.C.

Graduate student Kelsey Marshall led the charge for the Hurricanes, recording 18 points and four 3-pointers in the game to pace all scorers. Senior Karla Erjavec joined Marshall in double-figures with 10 points on the afternoon, nine of which came in the second half alone.

After her historic 27-point outing on Friday, graduate student Destiny Harden cooled off a bit on offense but was still a crucial piece for the Hurricanes, leading Miami on the boards with seven rebounds.

Eight different Hurricanes scored in Miami’s victory over Notre Dame and eight players also tallied a rebound in the contest. As a team, the Hurricanes outrebounded the Fighting Irish, 36-31, including an 11-3 mark on the offensive glass.

Miami picked up where it left off against Louisville, starting the game on a 9-0 run, with Marshall accounting for five of the nine points. Dating back to the Louisville game, the Hurricanes put together a 26-0 run against the two top-25 teams.

It was the Hurricanes’ defense that dominated the first quarter as Miami held Notre Dame to just two buckets in the frame to take a 12-4 lead at the end of one. The Hurricanes also forced the Fighting Irish into six turnovers and totaled nine points off giveaways in the first.

Notre Dame found its rhythm on offense in the second, shooting 60 percent in the quarter to work their way back into the game. The Fighting Irish put together a 9-0 run of their own to snag their first lead of the game at the 3:49 mark. There were a couple more lead changes in the final minutes of the first half, but junior Moulayna Johnson Sidi Baba drove hard to the basket in the waning seconds to tie the game at 26 heading into the locker room. 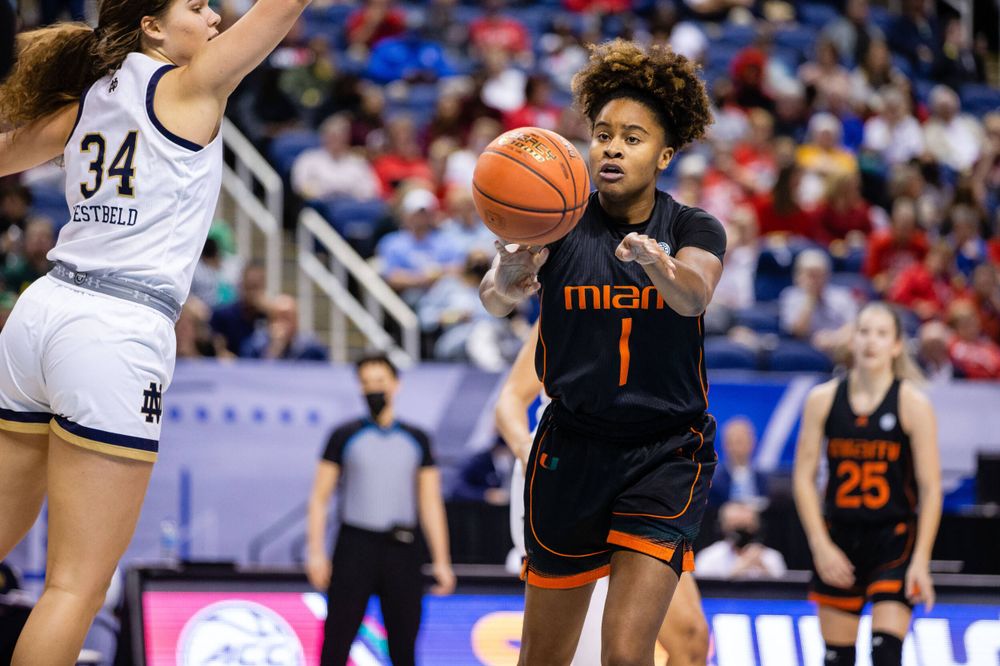 The teams went basket-for-basket to start the third quarter, with neither team taking more than a four-point lead through the first five minutes of action. However, back-to-back 3-pointers from Marshall and Erjavec highlighted an 8-0 run for the Hurricanes, stretching their lead to seven points at the 4:08 mark.

The Fighting Irish continued to hang around, posting back-to-back layups with two minutes left in the frame to cut the lead to six, 46-4-0, in favor of Miami as the third quarter came to a close.

Notre Dame scored six of the first eight points in the fourth quarter to pull to within two of the Hurricanes. A 3-pointer from Notre Dame’s Maddy Westbeld with 2:55 to go in the game put the Fighting Irish back on top, 51-50.

The Miami seniors would not be denied and Erjavec responded with a driving layup to give Miami the 52-51 edge. Marshall followed up with a huge 3-pointer at 1:55 in the fourth to put Miami ahead by four. Senior Dara Mabrey responded with a three of her own to make the score 56-54, in favor of the Hurricanes, with 36 ticks left on the game clock.

Senior Mykea Gray took a trip to the free throw line, knocking down 1-of-2 shots, to put Miami up, 57-54, and the Hurricanes made a huge stop on defense to seal the victory.

The Hurricanes will take on reigning ACC Champion and first-seeded NC State Wolfpack on Sunday in the ACC Championship title game. The contest is slated to tipoff at 12 p.m. and will air on ESPN.