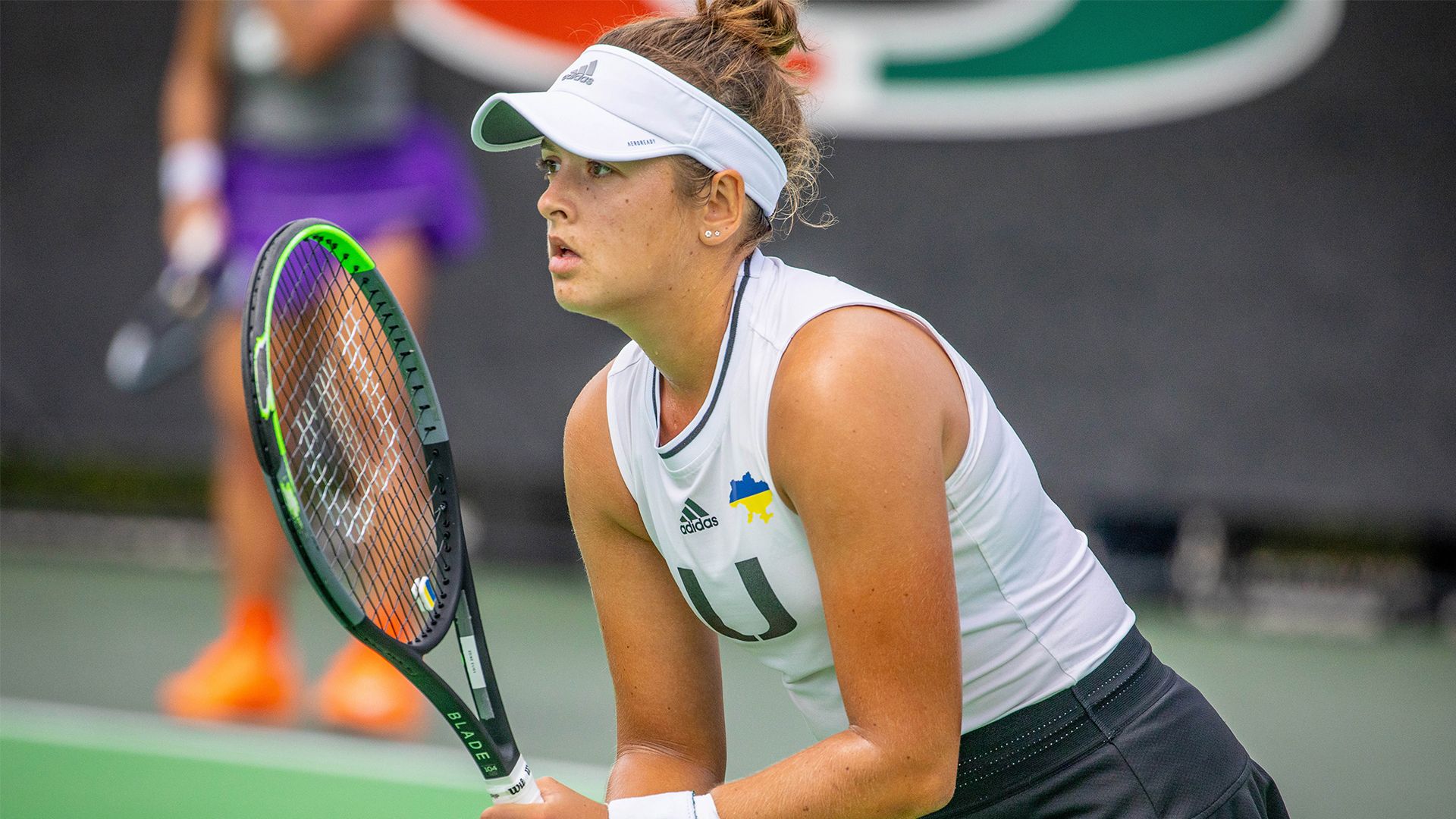 Finding Support On and Off the Court

CORAL GABLES, Fla. – Every day of late begins and ends the same way for Diana Khodan.

The Hurricanes tennis player opens her phone, reads the headlines from home and tries, as often as she can, to check in with her family and friends to make sure they are still okay.

But on Sunday, in between that emotional routine, there was an unforgettable moment.

As Khodan and her teammates prepared to take the courts for Miami’s match against Clemson, the third-year sophomore noticed the splashes of yellow and blue not far from Miami’s famous “U” on the Hurricanes’ uniforms.

She was overcome with emotion.

Three days after the Russian invasion of her Ukrainian homeland, Khodan’s teammates all wore her nation’s colors on decals over their hearts. And three days after her world had been turned upside down, Khodan was reminded she didn’t have to navigate all she was feeling on her own.

Her Miami family stood with her, with her Ukrainian family and with her country. 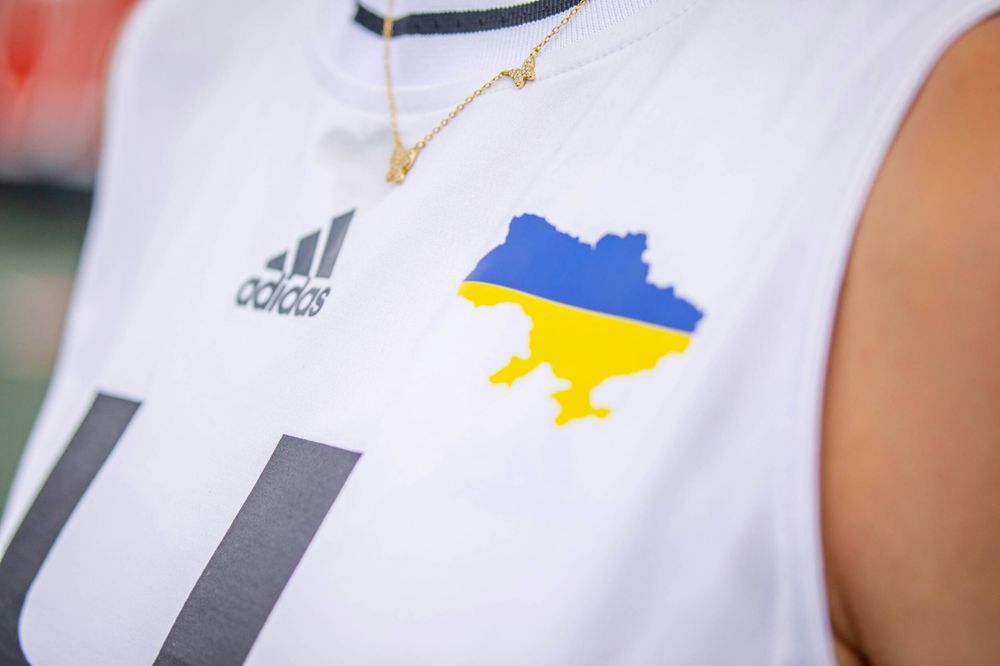 During Sunday's win over Clemson, the Miami Hurricanes women's tennis team wore blue and yellow decals over their hearts in support of teammate Diana Khodan, who hails from Ukraine.

That meant more than anything that would transpire between the lines that afternoon.

“When I saw my flag, the flag of Ukraine, I couldn’t really describe my feelings,” said Khodan, who hails from Ivano-Frankivsk, a city of 230,000 in western Ukraine whose airport was bombed shortly after the Russian invasion began last week. “There is nothing more important than my country and what is going on there right now. But on Sunday, when I saw that everyone was actually wearing the flags, I cannot even describe how I felt. I’m just lucky that I have this team that stands for each person and especially stands for me right now.”

There were tears, there were hugs and then, for three hours, there was a brief respite.

Khodan and her doubles teammate Maya Tahan, who are ranked 38th nationally, notched the first victory of the day for Miami in what was ultimately a 6-1 win over Clemson.

And in singles play, Khodan posted a dominant 6-1, 6-0 win over Clemson’s Samantha Buyckx in a match that ended well before many of their teammates had even started their second sets.

For Khodan, the two wins were especially meaningful.

On that particular sun-splashed afternoon at the Neil Schiff Tennis Center, the 20-year-old wasn’t competing solely for herself or for the now 14th-ranked Hurricanes.

That match was for her family, for her home and for her people.

“Tennis has always been for me, more than sport…It’s my happy place,” Khodan said. “The tennis court is where I turn my head off and just do what I love, what I truly love. I think right now, the tennis court is helping me stay on track and keep going. Right now is probably not a good time to play against me. On Sunday, my emotions were all over and I just wanted to let it go. I think that’s why I hit the ball so much harder than usual. I was thinking about my people fighting in Ukraine, for Ukraine. I should fight here for Ukraine. I cannot lay down.” 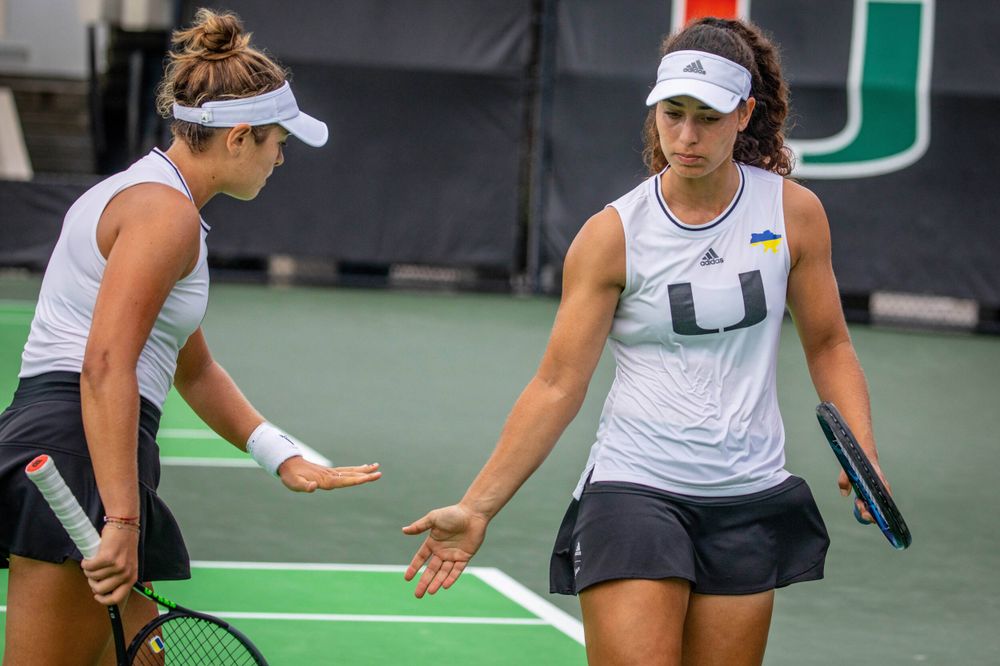 While her teammates, coaches and friends at Miami know they can’t truly understand the wave of emotions Khodan is experiencing on a daily basis right now, all of them have done their best to rally around her and give her whatever kind of support – or space – she needs.

There have been team lunches and team dinners. Plenty of heartfelt conversations. Moments of levity and laughter, when Khodan has needed them. And head coach Paige Yaroshuk-Tews has stressed to Khodan that her door – and her home – are always open.

“You never know what the next day is going to bring. You just never know and you have to be prepared for anything. I think she’s done a good job of just opening up and being real with her emotions,” Yaroshuk-Tews said. “If she needs to cry, she cries. If she needs to laugh, she laughs. She comes out here and she’s approachable and coachable through it all. And I think the team coming together for her, these girls are her best friends. They’ve done an incredible job of just letting her go through this. You have to move through it in…I am trying to kind of be her North [Star] through all of this, at least here and get her whatever she needs to be as comfortable as she can be…That’s my job and that’s more important than the matches and the coaching.”

Added sophomore Isabella Pfennig, one of Khodan’s teammates and closest friends, “What Di’s going through right now is terrible and we just want to make her feel better. I mean, unfortunately, there’s not a lot we can do, so we just have to be here for her…Obviously, she’s separated from her family, so we want to be her family here. And I think we are. If she wants to talk about it, we talk about it. We want to distract her, so we’re just [trying to] be here for her and showing her all the love she needs right now…I feel like our team is really here for her and she feels that.”

The support Khodan has received in recent days has extended even beyond her tennis family.

On Tuesday, University president Julio Frenk stopped by the team’s practice to speak with Khodan and her teammates, a gesture that visibly moved more than a few of the Hurricanes. Miami Vice President/Director of Athletics Dan Radakovich visited with Khodan and the team, too.

All of that, Khodan said, has made the uncertainty and fear of the last few days a bit more bearable.

But even as she moves through her classes and looks ahead to Miami’s matches at 15th-ranked Wake Forest and second-ranked North Carolina State in the coming days, Khodan’s thoughts never really stray too far from what is happening at home.

She worries her father, Liubomyr, and brother, Taras, may be called upon to join the Ukrainian forces defending their home. And she knows that as long as they and her grandparents remain in Ukraine, her mother, Natalya, won’t leave and seek refuge outside the country’s borders.

It is a heavy burden to carry, along with all of the responsibilities she already has as a student-athlete competing on a ranked team at a major university. But Khodan is determined to press on and to do her best to represent her family and her homeland as best she can, on and off the court.

And she hopes that in South Florida and beyond, the world is paying attention to what is happening in her beloved country.

In the meantime, she is grateful for all her teammates and coaches have done in recent days.

“We’re like a family here. I couldn’t even imagine in the beginning that a group of girls could be as close as we are right now. We’re more than friends,” Khodan said. “They’re super supportive and helping me and I’m helping them…We just love each other, truly love each other.”