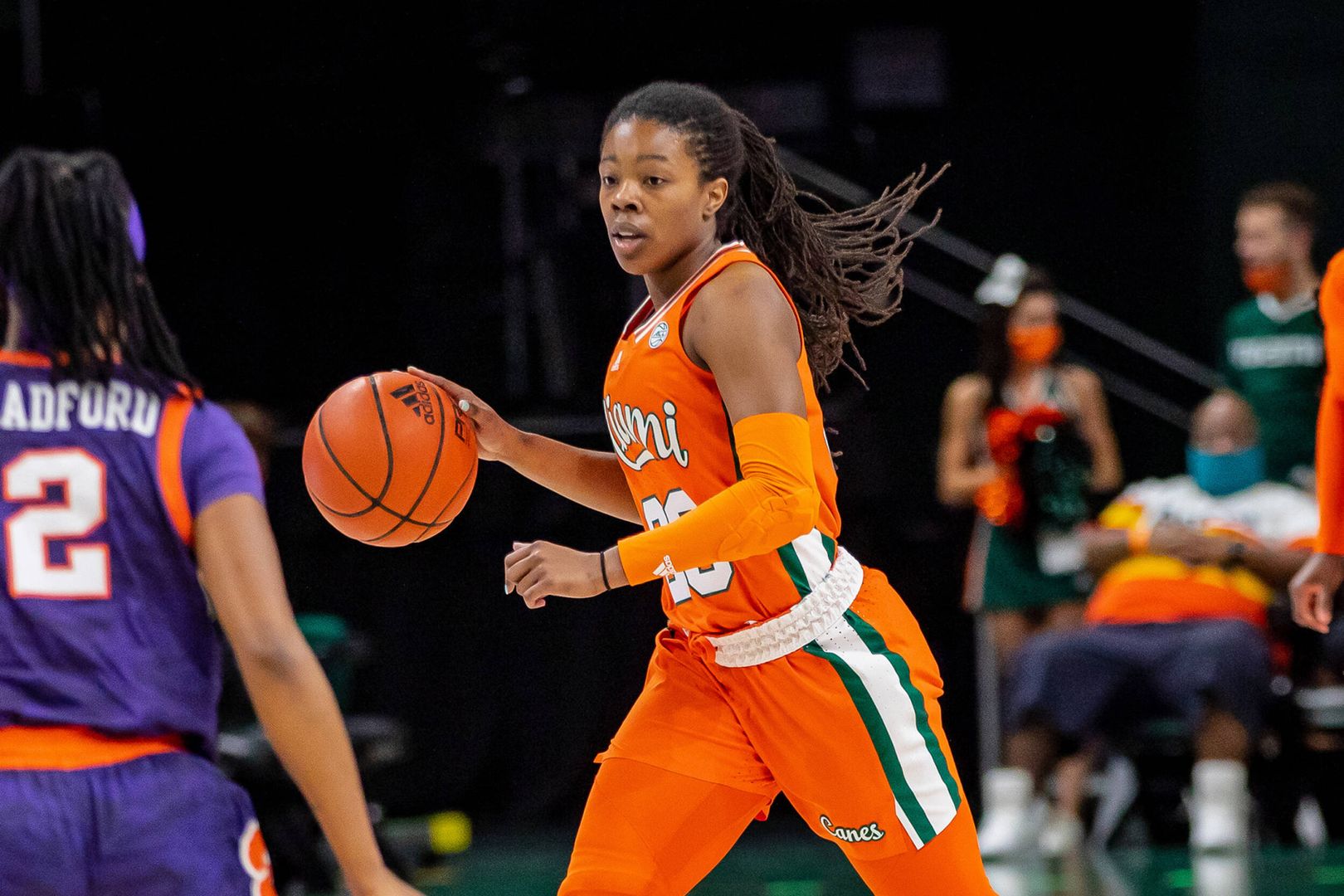 It was fitting that graduate student Kelsey Marshall would lead the Hurricanes (17-11, 10-8 ACC) in scoring on Senior Day, tallying 19 points on 7-of-10 shooting. As a group, the senior class combined for 41 points – Naomi Mbandu (eight points), Mykea Gray (seven points) and Maeva Djaldi-Tabdi (seven points).

“Clemson is very well coached and they are a  tricky team because they trap and press and change their defense a lot,” head coach Katie Meier said. “Our players just wanted to take care of business and get a big win. I don’t think there’s a team in this country that has improved as much as us and put the parts together. We’re finally playing hard and clicking a little bit.”

The Miami defense held Clemson to shooting 26.8 percent from the field, including a four-point second quarter. The Hurricanes outrebounded the Tigers 46-28 and were led on the boards by Mbandu at seven rebounds. 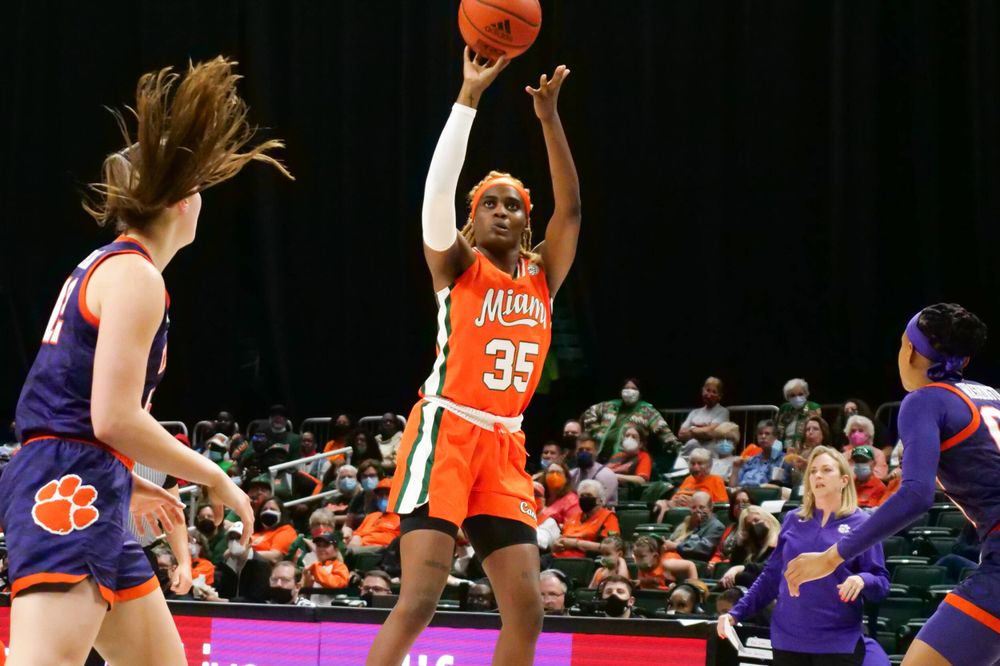 Junior Lola Pendande scored Miami’s first points of the game, putting up a pair of layups in the first two minutes of the game. The Hurricanes stretched their lead to eight thanks to back-to-back 3-pointers from Marshall. As a team, Miami shot 52.9 percent from the field in the first quarter to take a 21-12 lead after 10 minutes of action.

The Hurricanes kept their foot on the gas pedal in the second, outscoring the Tigers 28-4 in the frame. Seven Miami players tallied a bucket in the second quarter, paced by freshman Lashae Dwyer who poured in seven points (3-of-3) in the session.

On defense, Miami was a force to be reckoned with, not allowing a Clemson bucket for the entirety of the quarter. The Hurricanes won the battle on the glass, 14-10, in the second and tallied three steals and three blocks. Between the offensive domination and the defensive pressure, Miami entered the locker room at halftime up, 49-16.

Clemson opened the second half on a 10-5 run, but the Hurricanes recorded nine of the next 14 points to keep their lead at 33 at the close of the third quarter. Marshall led Miami in scoring in the frame, adding seven points to bring her total to 17 on the game. The Davie, Fla., native finished her final regular season contest at the Watsco Center with 19 points and exited the game to a standing ovation from the crowd.

The fourth quarter was a relatively low-scoring affair as Miami and Clemson recorded 13 and 10 points in the frame, respectively. In total, 11 Hurricanes scored in the game and 11 recorded a rebound. Miami finished the night shooting 51.7 percent from the field, marking the sixth straight game the Hurricanes have shot better than 40 percent.

The Hurricanes head to Greensboro, N.C., on Tuesday to take part in the 2022 ACC Tournament, which begins with first round action on Wednesday. The first three rounds will air on Bally Sports, while the semifinals and finals will be broadcast on ACC Network and ESPN, respectively. 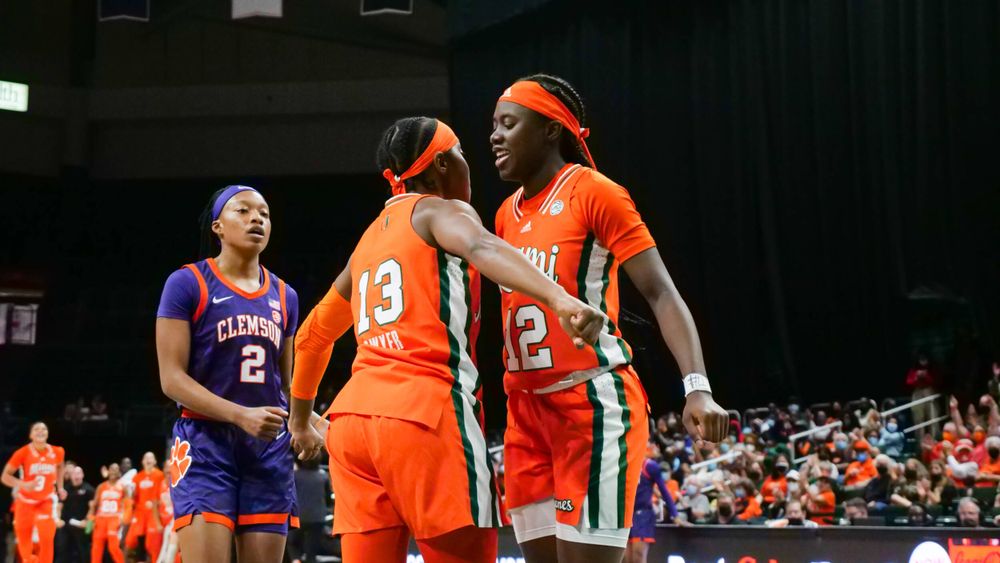