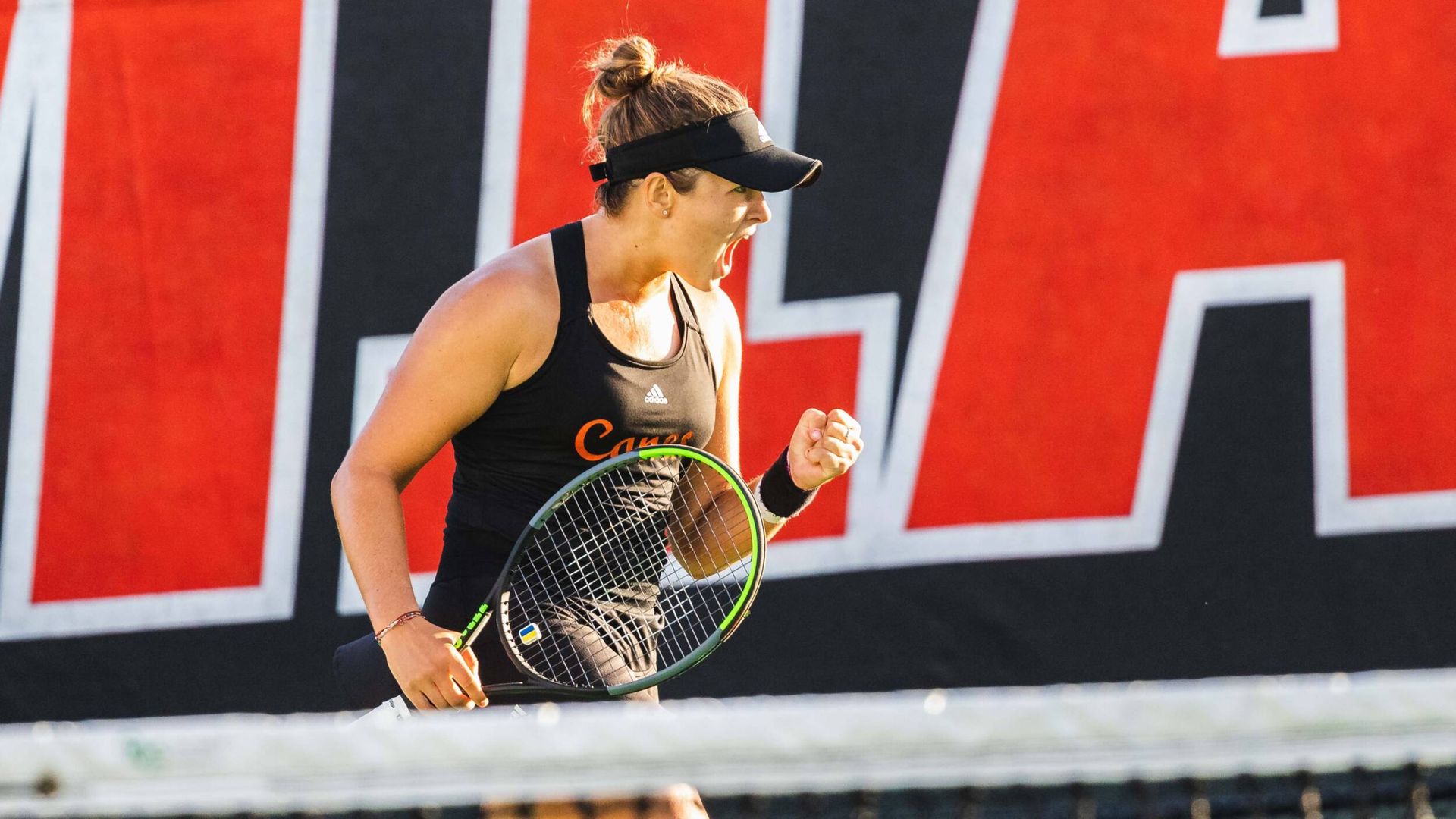 CORAL GABLES, Fla. – The University of Miami women’s tennis team started its 2022 conference slate Friday night with a 4-3 victory over No. 47 Georgia Tech.

After dropping the doubles point for the first time this season, No. 15 Miami (6-1, 1-0 ACC) took four straight singles matches to earn the win on its home court at the Neil Schiff Tennis Center.

“To start ACC play against a team that has great first-ball strikers [was difficult]. I think, in doubles, it got us a little bit on our back feet on Courts 1 and 2,” Miami head coach Paige Yaroshuk-Tews said. “It got our rhythm off a little bit; we weren’t able to bounce back. But then to get together and put together that type of effort [in singles] is, I think, a good example of just kind of who we’re identifying as. That’s what we’re talking about a lot. It wasn’t unbelievable tennis, but it was unbelievable grit and unbelievable teamwork and unbelievable effort.”

The Hurricanes got off to a blazing start in doubles, as sophomores Audrey Boch-Collins and Isabella Pfennig rolled to a 6-0 victory over Gia Cohen and Ruth Marsh.

Georgia Tech (3-4, 0-1 ACC), in one of two top-40 matchups, leveled the doubles tally with a 6-3 win from No. 16 Kylie Bilchev and Ava Hrastar over Miami’s No. 40-ranked pair of fourth-year Daevenia Achong and fifth-year senior Eden Richardson.

Third-year sophomores Diana Khodan and Maya Tahan, ranked No. 38, rallied from 2-4 and 3-5 deficits on Court 2 to take a 40-30 lead in the ninth game, but No. 18 Carol Lee and Kate Sharabura fought off two game points to win at deuce and take the match, 6-4. Miami previously held a 13-1 record in dual match doubles play this season.

Once singles play started, the Hurricanes quickly turned the tables back in their favor, winning the opening set on each court.

Khodan earned the equalizing point after finishing off a commanding 6-2, 6-0 victory against Marsh.

All three remaining matches went to three sets, with the Yellow Jackets holding early leads in each at different times. With Georgia Tech ahead 5-2 on Court 1 and 3-0 on Court 4, Miami turned to No. 67 Achong on Court 3 for the clincher.

The Geleen, Netherlands, native delivered just that. Achong rallied back from a 0-2 deficit against Hrastar to take six of the final eight games, including climbing out of a 0-30 hole to break in the final one, earning a 6-4, 3-6, 6-4 triumph to clinch the overall match 30 minutes after Pfennig’s win.

“Just really great for Daev to be able to clinch that tonight, I think. She is learning a lot about herself and she just stayed true to who she is. She started stepping back there a little bit in the 5-4 game and the kid went up 30-0 on her. I just told her, ‘Come on, you’ve got to step up and hit.’ She did it, she listened and she was coachable against a really good player [whom she previously] lost to. Daev came up huge, played big and ran down some balls.

“That last ball down the line was an incredible get and I’m pretty sure she wouldn’t have gotten that ball last year,” Yaroshuk-Tews continued. “So, she has gotten better and I think she is believing in herself and playing good tennis.”

With result no longer in doubt, Georgia Tech finally tallied its first singles victory of the evening, as No. 72 Lee finished off a 4-6, 6-1, 6-2 comeback decision against No. 81 Richardson. Mahak Jain then tallied a come-from-behind decision of her own, as she edged Boch-Collins, 2-6, 6-4, 6-0, to make it a 4-3 final score.

Saturday marked the third consecutive year the Hurricanes opened league play versus Georgia Tech and the second time in that stretch they came away with a victory. Miami is now riding a four-match winning streak in 2022, with each victory over a Power Five and/or top-20 opponent.

“That’s a good Georgia Tech team. Great job to Georgia Tech,” Yaroshuk-Tews said. “Great job to our girls; welcome to the ACC. We lost too many of these [close ones] last year, so it’s nice pull this out.”

The Hurricanes wrap up their four-match homestand Sunday at 11 a.m. when they host Clemson at the Neil Schiff Tennis Center.