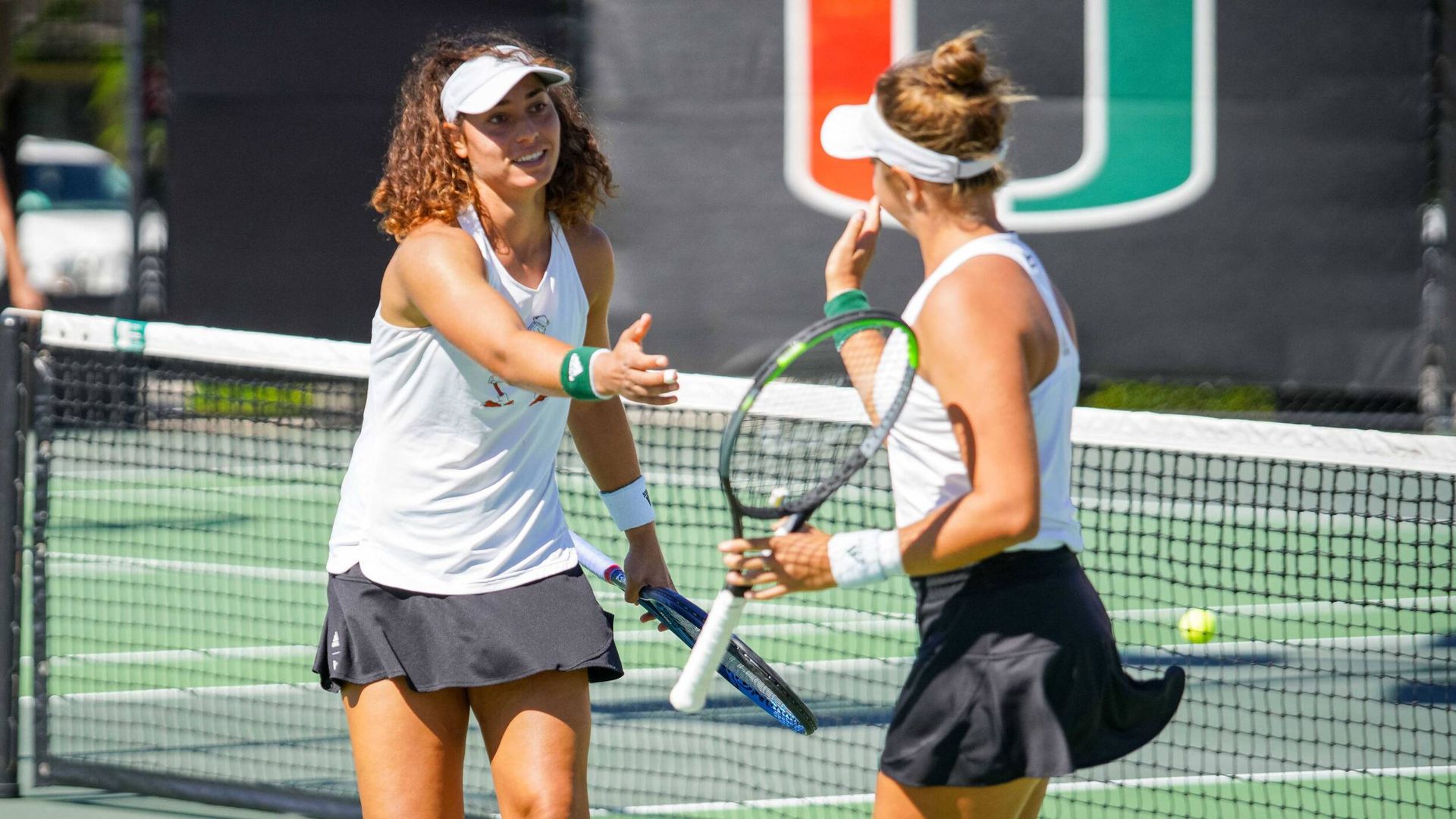 CORAL GABLES, Fla. – The University of Miami women’s tennis team turned in a splendid performance Sunday afternoon at the Neil Schiff Tennis Center, rolling to a 5-0 triumph over No. 19 UCF.

“Honestly, our girls are just being tough. We’ve been focusing more on toughness than tennis and that’s what we’ve got to do moving forward,” Miami head coach Paige Yaroshuk-Tews said. “Our conference is tough; this is a huge out-of-conference win. But it comes down to staying healthy and staying tough. All these kids know how to play tennis, but not everybody knows how to put together the victory and we’ve been doing a good job of that. I think starting off by getting the doubles point helps our confidence moving forward.”

The Hurricanes turned in strong performances on all three doubles courts to take the opening point. Sophomores Audrey Boch-Collins and Isabella Pfennig got Miami off to a sizzling start by blanking Anique Kattenberg and Noel Saidenova, 6-0.

After UCF staved off a match point on Court 1, the Hurricanes turned to Court 2 to seal the point. There, third-year sophomores Diana Khodan and Maya Tahan, ranked No. 50, defeated Sophia Biolay and Nandini Sharma, 6-3, to give the home team the lead.

The Hurricanes jumped on UCF (4-3) early in singles play, taking five opening sets. Two Miami players then closed out their matches in a span of 15 minutes to up the edge from 1-0 to 3-0.

First, Achong topped Saidenova, 6-1, 6-2, in a dominant performance from start to finish. Then, Khodan took down Kattenbergm 6-0, 6-3, in an equally impressive showing.

It took approximately an hour for the next match to end, but when it did, another one followed suit just seconds later.

“I think Bella did an unbelievable job today,” Yaroshuk-Tews said. “She made some changes there, being down one set against a veteran player. To win the second and third sets, two and two, was big.”

When action halted, the Hurricanes were a game away from victory on yet another court, as Boch-Collins led Biolay, 6-4, 5-4. In the other ranked matchup, No. 89 Richardson and No. 48 Levashova were in the first game of set three, with the match score at 6-4, 4-6.

Miami improved to 12-0 all-time at home versus the Knights with Sunday’s victory, which also marked the 157th sweep of Yaroshuk-Tews’ illustrious 21-year tenure. It is her 100th shutout win in the last 14 seasons along, dating back to the start of the 2009 campaign.

Up next for Miami is its conference opener Friday at 5 p.m. against Georgia Tech at the Neil Schiff Tennis Center.