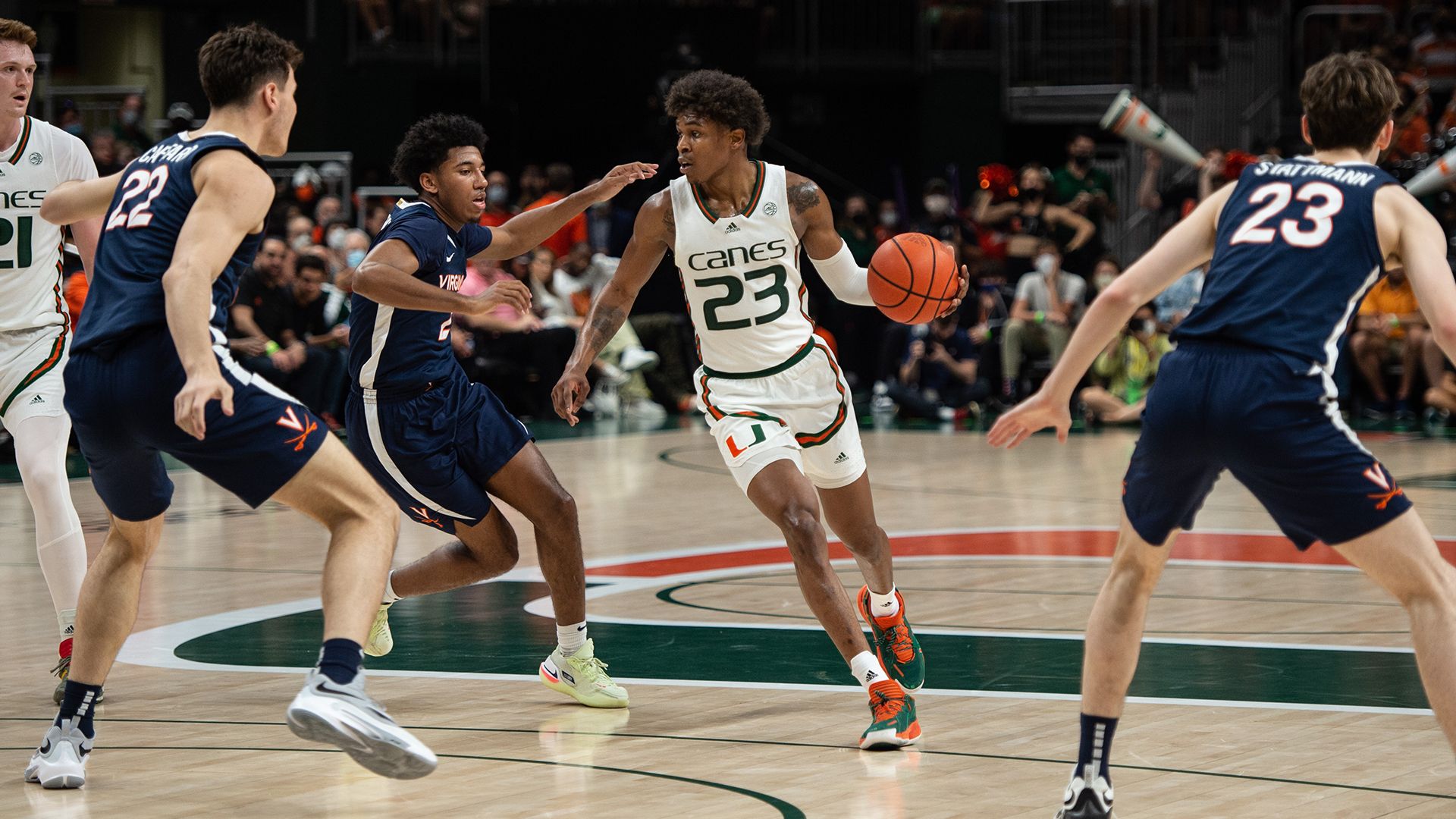 CORAL GABLES, Fla. – The University of Miami men’s basketball team led Virginia by 10 points early in the second half, but could not hold on, dropping a 74-71 decision Saturday evening at the Watsco Center.

Sixth-year redshirt senior guard Kameron McGusty scored a team-high 20 points for Miami (19-8, 11-5 ACC), which had its three-game winning streak come to an end in its second setback of the season versus the Cavaliers.

“Well, I thought we played a terrific first half. We scored 38 points in the first half and had an eight-point lead,” Miami head coach Jim Larrañaga said. “But the first seven minutes of the second half were just a disaster for us. They outscored us 19-6 and never looked back.”

The Hurricanes made their first five shots and raced out to a 12-4 lead through three minutes. Virginia (17-10, 11-6 ACC) quickly answered with a 14-6 surge—it made five straight field goals and a pair of free throws—to level the score at 18 with 13 minutes left in the frame.

The Cavaliers, buoyed by 9-of-10 shooting from the line, eventually took their first lead, 28-25, on a three-point play with 6:17 on the clock. Miami, though, upped its lead back to eight, 38-30, by the time the halftime buzzer sounded, closing the session on a 13-2 run. The Hurricanes held Virginia scoreless for the final 5:06 of the half and scored nine straight points.

A steal and fast-break layup by McGusty to open the second half gave the Hurricanes a game-best 10-point lead, 40-30, with 19:36 to play. The Cavaliers then scored eight consecutive points in 92 seconds. They eventually upped their run to 23-4, taking a 53-44 lead with 12:13 left after making eight straight field goals.

Miami, though, responded with seven points of its own to cut its deficit to two, 53-51, with 9:08 to go. The Hurricanes pulled within two twice more, but could not get any closer, despite scoring 14 of the final 23 points.

“I thought Kihei Clark actually just took over the game,” Larrañaga said of Virginia’s finish. “[He was] making threes, making good decisions and making free throws. When he’s playing that well, you have to have someone step up and try to shut him down.”

McGusty’s 20 points came on 6-of-13 field-goal shooting, including a 3-of-6 mark from deep, and a perfect 6-of-6 ledger at the line. The Katy, Texas, native added four assists to go along with a season- and game-best four steals, one shy of his career high.

Senior forward Jayden Gardner led all scorers with 23 points on 9-of-14 shooting for the Cavaliers. He added seven rebounds, two assists and a game-high three blocks.

Senior guard Kihei Clark recorded 17 points, including 14 in the second half, to go along with five assists. Redshirt sophomore forward Kadin Shedrick totaled 13 points and a game-best 13 rebounds, the latter the top mark by a Miami opponent all season. Sophomore guard Reece Beekman led all players with seven assists.

After the first game between the two teams included zero free throws in the first 36 minutes, both teams excelled at the stripe Saturday. The Cavaliers went 19-of-25 (76.0 percent) and the Hurricanes went 9-of-9, its first time making nine-plus free throws without a miss since March 2, 2016.

Miami ended the night with a 15-1 edge in fast-break points and a 42-24 cushion in paint points, but Virginia registered a 21-6 advantage in bench points.

Up next for the Hurricanes is a trip to Pittsburgh, where they play Tuesday at 8 p.m. against Pittsburgh at the Petersen Events Center, live on ACC Network.

MIAMI HURRICANES POSTGAME NOTES
– The Hurricanes moved to 12-15 all-time against Virginia, including 7-4 at home and 3-11 in Larrañaga’s tenure.
– Larrañaga, who entered the game with the ninth-most victories of any active Division I coach, is now 689-472 in 38 years as a head coach, including 219-138 in 11 seasons at Miami.
– For the 19th time this season, Miami used a starting lineup of McGusty, J. Miller, Moore, Wong and sixth-year redshirt senior forward Sam Waardenburg.
– With 23 blocks in ACC action, Waardenburg moved into the top five on Miami’s ACC-only single-season leaderboard, checking in at co-fifth, alongside Kenny Kadji (2012-13).
– McGusty now has 32 steals in ACC action in 2021-22, passing teammate Jordan Miller and Anthony Lawrence II (2017-18) to move from co-sixth into the top three on Miami’s ACC-only single-season list, tying Shane Larkin (2012-13) for third place.
– With 56 steals in ACC action at Miami, McGusty passed Brian Asbury and Shane Larkin to enter the top five of the Hurricanes’ all-time ACC-only career leaderboard.
– McGusty now has 115 made free throws in ACC play in his career, passing Brian Asbury to move into the top 10 on the program’s ACC-only career leaderboard.
-With 758 points in ACC competition as a collegian, Wong surpassed Davon Reed, who attended the game, to enter the top three on Miami’s ACC-only career list.
– Wong now has 255 made field goals in ACC play at Miami, also passing Reed to enter the top three on the Hurricanes’ all-time ACC-only leaderboard.
– Four of Miami’s five ACC losses this season are by four points or fewer, including three by one possession.
– The Hurricanes dropped to 18-2 this season when scoring 65-plus points, as their 17-game winning streak in such games came to an end.
– Miami’s 15-game winning streak when totaling 70-plus points also came to an end Saturday, as did its nine-game winning streak when at least four players tally double-digit points.
– The last time Miami lost a game it led by 10-plus was on 1/5/21 versus North Carolina, when it dropped a 67-65 result after holding a 10-point edge.
– The largest lead the Hurricanes held in a game they previously lost this season was nine on 11/28/21 versus No. 10/9 Alabama in a 96-64 setback in Kissimmee, Fla.
– The two starting point guards Wednesday evening, Miami’s Moore and Virginia’s Clark, have now combined for 209 collegiate starts across 264 outings.
– After attempting zero free throws in its 2/5/22 meeting with Virginia—a first for any program in ACC play in program history—Miami took one just 84 seconds into Saturday’s game.
– The two teams, who totaled three free throws in their prior matchup, combined to shoot 16-of-17 from the line in the first half, as Miami went 7-of-7 and Virginia went 9-of-10.
– McGusty notched the fifth occurrence this season of a Hurricane making six-plus free throws without a miss, including his second such performance.
– The last time Miami made multiple free throws in a game without a miss was also against Virginia, as it went 2-of-2 on 3/4/20.
– The Hurricanes last made nine-plus free throws in a game without a miss on 3/2/16 at Notre Dame.
– Virginia is the second Miami opponent to record just one steal in a game, joining North Carolina, which did so on 1/18/22.
– The last team to shoot over 60 percent in a half against the Hurricanes was also Virginia, which went 15-of-24 (62.5 percent) in the first frame on 2/5/22.
– Before Shedrick grabbed 13 boards Saturday, the highest total by a Miami foe this season was 12, recorded three times, all in Hurricane wins.
– McGusty, who eclipsed 600 made field goals and 200 assists, logged 20-plus points for the 24th time, including the 18th as a Hurricane and the 11th this year.
– McGusty, who also moved past 3,750 minutes played as a collegian, scored in double figures for the 88th time, including the 60th at Miami and the 25th this season.
– Waardenburg moved past 450 rebounds as a Hurricane.
– Wong, who surpassed 150 assists in his career, tallied double-digit points for the 57th time, including the 24th in 2021-22.
– J. Miller recorded double-figure points for the 60th time, including the 10th this year.