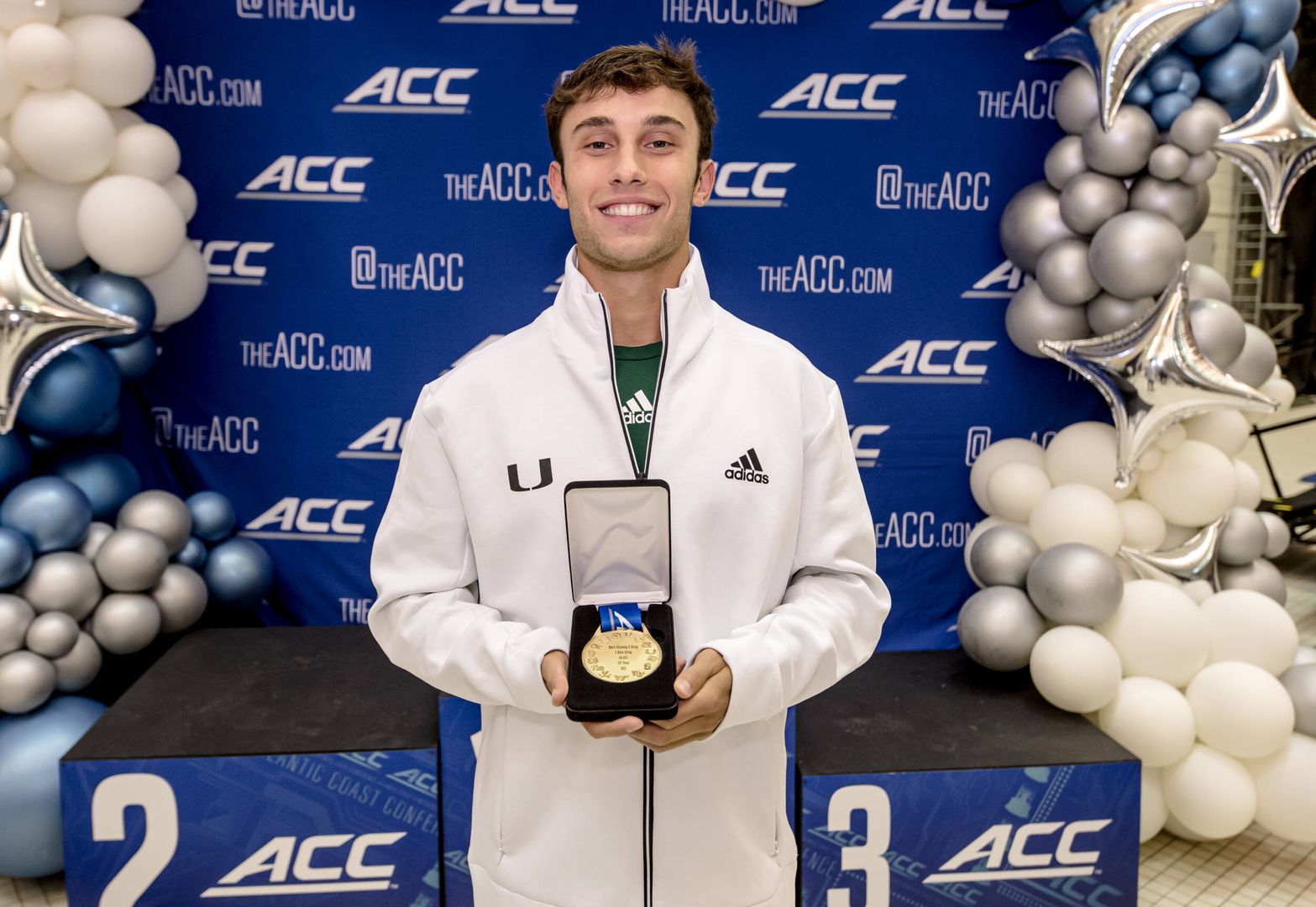 ATLANTA – Three medal-winning performances by the Miami Hurricanes highlighted the first day of the 2022 ACC Swimming & Diving Championships at the McAuley Aquatics Center.

Divers Max Flory (gold), Mia Vallée (silver) and Emma Gullstrand (bronze) delivered a dominant showing on the opening day of action, with Flory winning the 3-meter springboard and the duo of Vallée and Gullstrand making podium trips in the women’s 1-meter.

The Hurricanes women’s swimming & diving team ended the day in first place, with Miami comprising nearly half of the diving finals by qualifying all three divers in an event with eight total spots.

Vallée came less than a point away from winning her second ever conference gold. The Canada native finished with 353.85 points, just shy of Margo Omeara (354.75) of Duke. Gullstrand was third with 344.65 while veteran Millie Haffety, who also qualified for the finals, took sixth (287.35).

“I’ve been doing this a long time, and it’s rare to have every single diver click in an event like that,” head diving coach Randy Ableman said. “Everything has to go just right to be able to get all three in the top eight. I’m super proud of them, especially Millie in that preliminary. She needed to nail her last dive to get in there, and she did it.”

The gold medal was the first for Flory, who upped his career medal count to five over his three seasons with the Hurricanes. Despite a disappointing morning warm-up, Flory was brilliant from the outset of the competition.

“I came back for prelims with a different mindset, a different attitude and kind of put it all together,” Flory said. “I stopped trying so hard…I tried to make sure was good enough, not do anything crazy or overboard. I had a really good list in prelim and was able to go into the final with a lot of nerves and excitement.”

The Fairfax, Va., native ended the morning as the top finisher in the morning’s preliminary round. He held on to win gold, besting Anton Down-Jenkins (445.10) of North Carolina with a strong final round.

“Max did the hardest dives. He nailed the hardest dive of the contest for 9s [nine point scores] in the prelims,” Ableman said. “He turned around in the finals and was solid as a rock. He was confident, he was calm and to see him have that demeanor as an athlete makes me feel so good.”

Down-Jenkins was an Olympic finalist and the defending ACC champion in the event.

“I knew what I needed to do on the last dive. I tried to keep it calm, knowing I don’t have to do anything crazy as long as I get up one point higher than him, it was a done deal,” Flory said. “I tried not to think about it, but just do what I would have done anyways. I did what I know how to do – do a dive that’s good enough to win.”

“We did great. It really sets things up well for the rest of the week, the NCAAs and beyond,” Ableman said. “The way they handled themselves and the quality of the dives they did was top notch. It makes me feel good that they’ve gotten better this year and they’re setting themselves up for an even better postseason.”

The Hurricanes’ 800-yard freestyle relay entry, comprised of Aino Otava, Carmen San Nicolas, Sydney Knapp and Adrianna Cera, finished the first swimming event of the week with a time of 7:12.22.