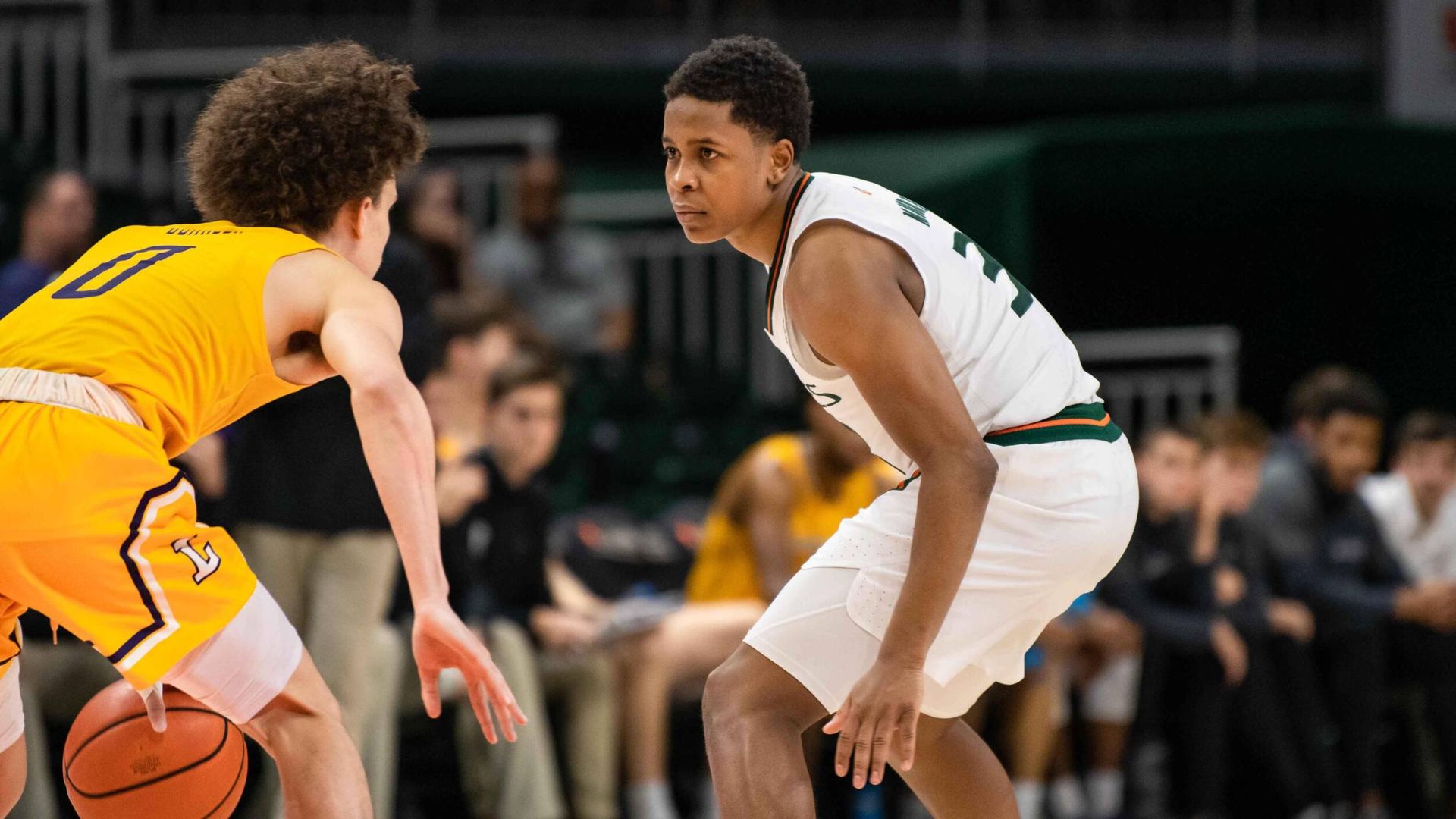 Head of the Snake

CORAL GABLES, Fla. – Again. The Hurricanes did it again.

For the fourth time this season—and the second in a row—the University of Miami men’s basketball team stormed back from a deficit of 13-plus points to earn a victory.

Saturday evening’s comeback, though, was particularly impressive. The Hurricanes rallied on the road against a top-25 team, clawing their way to a 76-72 triumph against RV/No. 25 Wake Forest at the Lawrence Joel Veterans Memorial Coliseum.

“I think we just stayed together as a team. We picked up our energy, defensively, in the second half,” sixth-year redshirt senior guard Charlie Moore said. “We started executing in the second half. As a team, I feel like we just stick together through it all. In those tough environments especially, like Wake Forest, it’s critical we stick together as a team and stay strong. I feel like we did that.” 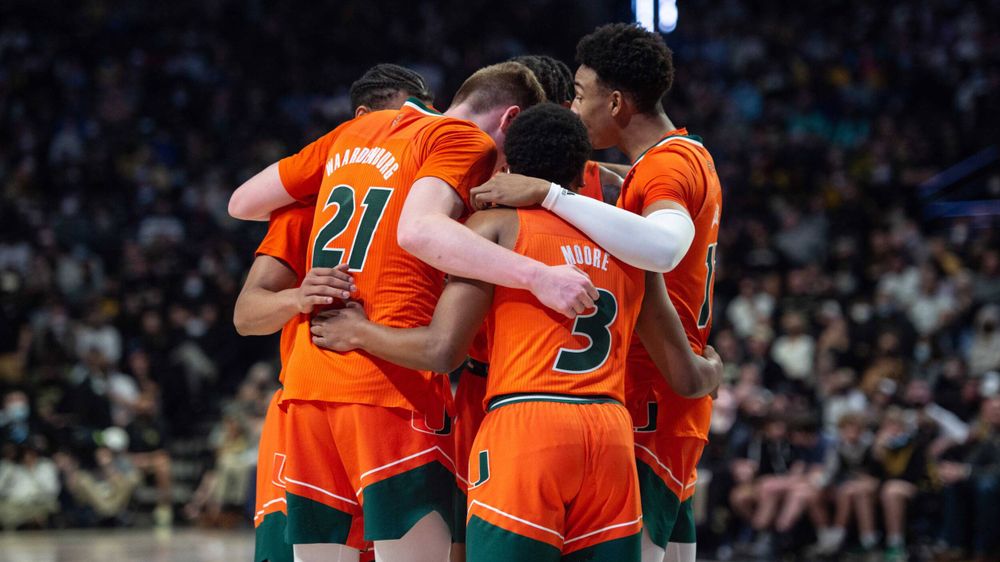 Saturday’s triumph marked the 10th time this season Miami won a game after trailing in the second half. The Hurricanes also improved to 7-6 when behind at the break, including 5-3 in ACC action.

Those prior experiences help the team remain confident when facing large deficits, even if their goal is, of course, to avoid being in those situations.

“We never get rattled. We understand the stakes at hand,” Moore shared. “We understand that when we get down like that, all we’ve got to do is put together some stops and score in transition or in half-court. If we do that, we can come back and win. But it’s not something we’re proud of or we’re looking forward to doing every game because we know we can do it. We’ve got to [open] with better starts at times, but it’s good to see that we can make those stops and execute offensively in order for us to come back in games and come out with the win.”

Moore battled through foul trouble against the Demon Deacons and had his six-game double-digit scoring streak come to an end. It marked just the second time in the last 12 games he did not tally 12-plus points.

However, he still knocked down a huge second-half 3-pointer and finished with three assists compared to one turnover. Moreover, Miami assuredly has the high-octane guard depth that allows a player to have an off night scoring the ball.

For Moore, it is a joy to compete alongside elite backcourt mates at his side, as any of the three have the ability to go off for a big game at any point.

“Oh, man, it’s a great feeling being able to play with other guys that know the game, can score the ball, make the right play for the team and also play hard defensively,” Moore said. “It’s a great mixture of guys who are going out there to play to win and to help the team … to the best of our abilities. So, it feels good. It’s a blessing to play in a backcourt with Zay and Kam. I love it. I just try and go out there and play my game. They play their games and I just feel like we feed off of each other. It’s pretty great.” 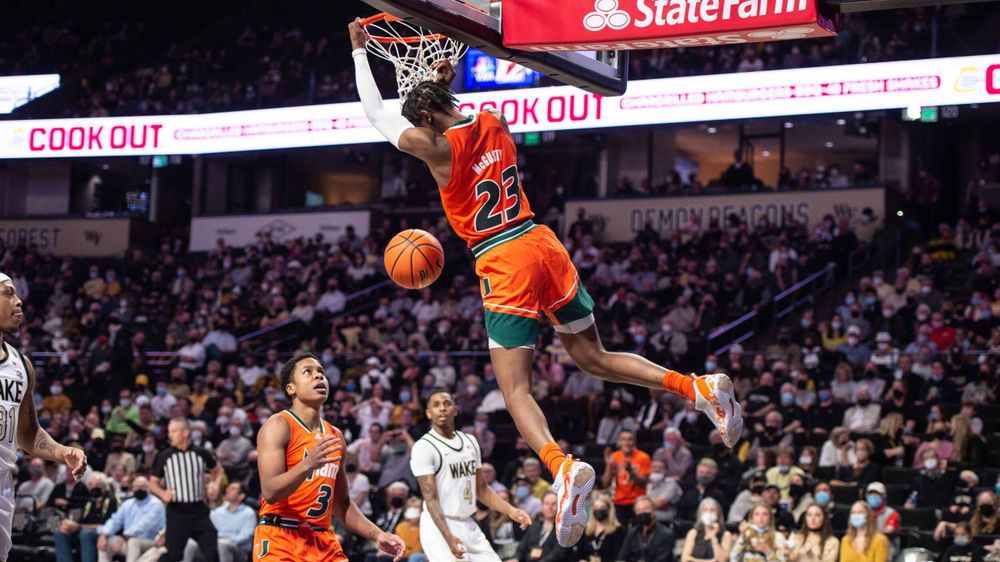 Moore, as expected for a veteran team leader, mentioned the defensive element the Hurricane guard group brings. That mindset actually extends to the team as a whole.

Over its last 11 games, Miami has forced a whopping 164 turnovers, with 113 of them coming off steals. In eight of those outings, the Hurricanes recorded double-digit thefts.

Miami had just seven giveaways versus the Demon Deacons and forced 17 at the other end, leading to a eye-popping 19-0 edge in points off turnovers. Stacking numbers like that, against any foe, is truly a team effort and the Hurricanes have consistently excelled in doing so.

Moore, though, is the one leading the charge, as he is averaging 2.12 steals per game to co-lead the ACC, with fourth-year junior guard Jordan Miller (1.75, co-third) and McGusty (1.64, sixth) not far behind.

“I just think I play defense well off of my teammates. I’m the head of the snake most of the time; I’m guarding the guy who’s bringing the ball up. So, I just have to come out to every game and bring energy,” Moore remarked. “I feel like my energy can be contagious to other players on the team. So, I just try to bring as much as energy as I can and hopefully it helps my teammates to see the energy that I’m bringing and they start to pick it up, which does [happen].”

The Hurricanes will assuredly need to bring that defensive intensity in their next game, Wednesday night against Louisville, if they hope to do something they have never done before. 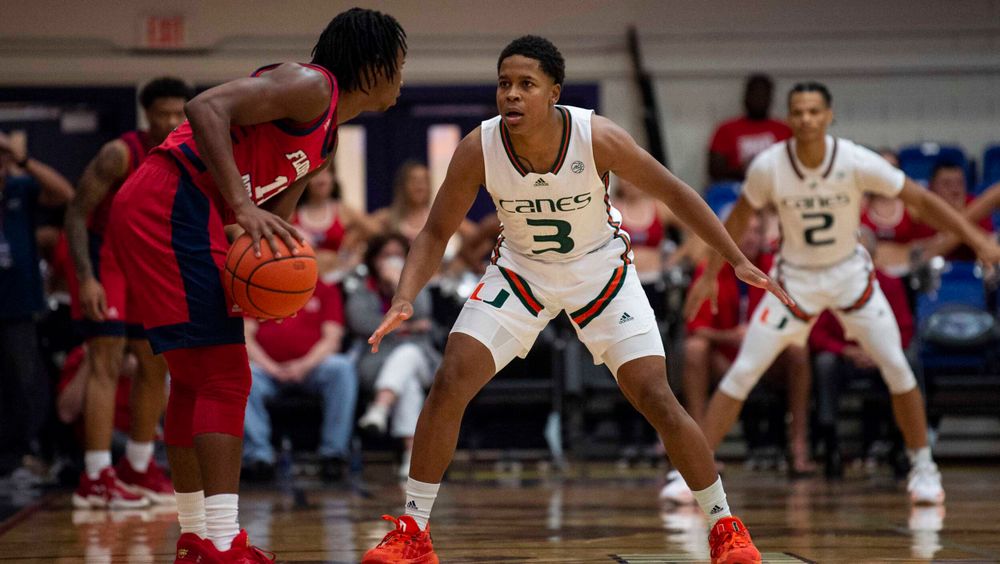 Miami is 0-6 all-time on the road against the Cardinals, who are also the only team 11th-year head coach Jim Larrañaga has not defeated in an away game.

Action at the KFC Yum! Center in Louisville, Ky., is slated for 7 p.m. Four of the Hurricanes’ six road losses to the Cardinals are in that building.

“I know it’s not going to be an easy game. I know they’re not doing as well [as usual] this season, but I feel like everybody in the ACC is a good team,” Moore shared. “Like I’ve said before, I just feel like anybody can win in the ACC, any night out. So I know, going into Louisville, playing in their house, they’re going to play extremely hard. They’re going to play to win, so we’ve got to go out there and execute, play Miami basketball and just give 110 percent effort out there.”

Although the Hurricanes have turned in some strong defensive performances of late, Louisville presents a unique challenge.

The Cardinals, who enter at 11-13 (5-9 ACC) on the season, do not have a single double-digit scorer on their roster, but do have 10 individuals averaging at least 5.0 points per game. Senior guard Noah Locke and fifth-year senior forward/center Malik Williams, who logs a team-best 8.3 rebounds per outing, co-lead Louisville in scoring at 9.5 points per game.

Facing a team without any defined go-to player can be difficult, especially after Miami’s last two games came against teams with a top-three scorer in the ACC.

“It sounds like they’re a pretty well-rounded team,” Moore said. “So, I feel like we’ve just got to go out there and play our defense, pack the paint and force them to shoot tough twos and tough threes. [We need to] play together, as a team, defensively. I feel like we’ve been doing that a lot this season. So, we’ve just got to keep it going and bring it into the next game as a well.”

Despite its winless record the road against Louisville, Miami is 5-13 all-time versus Louisville, one of the most historic programs in the country.

In the most recent meeting, the Hurricanes earned a 78-72 upset win over then-No. 16/18 Louisville on Jan. 16, 2021—exactly 13 months prior to this season’s affair—at the Watsco Center in Coral Gables, Fla. Wong scored a career-high 30 points in the win, adding seven rebounds and a career-best six assists.

Miami will now look to get its first road win over the Cardinals in front of a rabid fan base that packs a 22,000-seat arena. That is certainly no easy task.

However, the Hurricanes are 6-2 in true road games and have already won at vaunted Cameron Indoor Stadium this season. 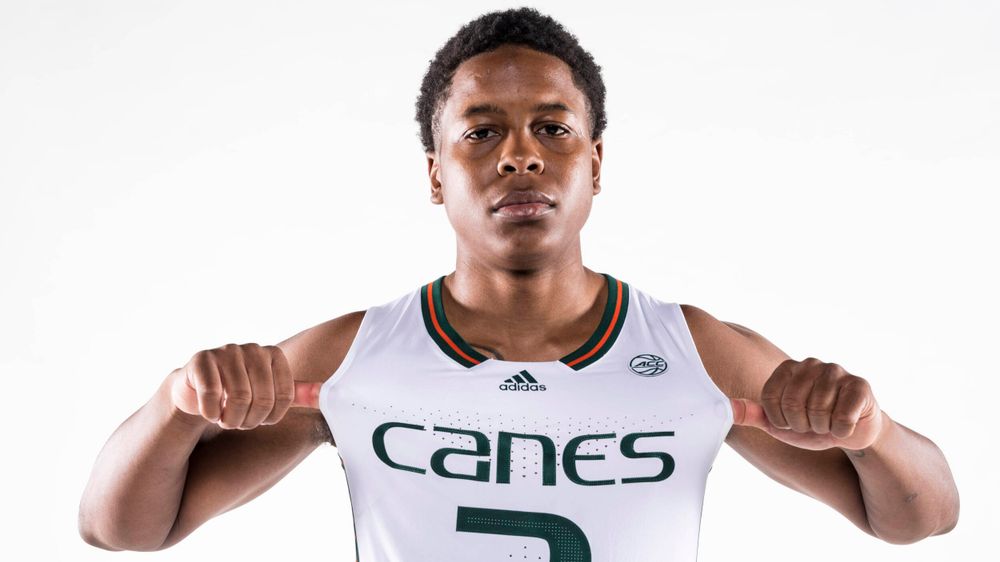 “It’s always fun to play in somebody else’s home. Me, personally, I feel like I like playing away better sometimes,” Moore said. “It’s going to be a big game. Like I said, people tend to play harder at home. They’ve got their fans and crowd behind them. So, they play harder, they shoot better, they play defense better. [It will be] just an all-around better game for those guys. So, [playing in that environment] shows who we are as a team and we’ve just got to go out there, execute defensively and offensively to the best of our abilities and, like I said, keep giving 110 percent effort. That will help us come out with the win.”

Wednesday night’s matchup will be broadcast live on RSN—that is Bally Sports Sun locally—with Evan Lepler and Cory Alexander on the call. A full affiliate is available HERE and it can also be seen on WatchESPN, subject to blackout, HERE. Joe Zagacki will have the radio broadcast on AM 560 Sports WQAM HERE, while live stats will be available HERE.

After playing Louisville, the Hurricanes return home to face Virginia, with action slated for Saturday at 5 p.m., live on ACC Network from the Watsco Center.