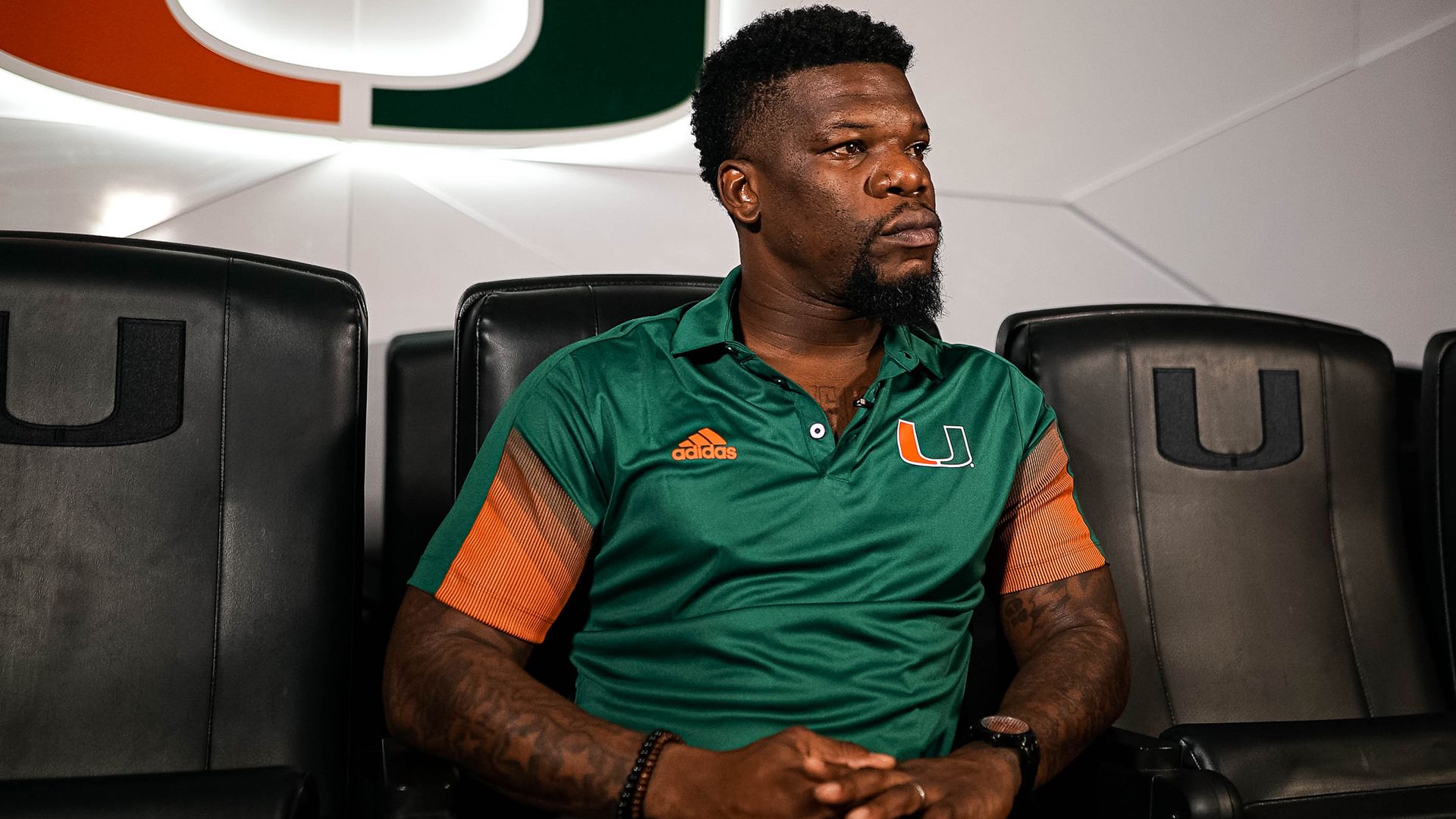 As word spread he’d been named the Miami Hurricanes’ new running backs coach, the calls and text messages poured in – and they came from some of the biggest names in program history.

All of them sent their well wishes, offered their support and welcomed him to the Hurricanes family. And in their own ways, each served as a reminder of the responsibility Smith now bears.

It’s a responsibility Smith – a Miami native – understands. And embraces.

“It’s hard to pass on the rich tradition of the University of Miami,” said Smith, who coached running backs at Mississippi and FAU before joining the Hurricanes earlier this month. “Being from South Florida, I’ve had a lot of friends over the years play for the University of Miami and the main thing was being a part of something special. Believing in [head coach Mario] Cristobal’s vision, a lot of things that we talked about aligned and I thought he was the perfect leader to coach with and help bring The U back.”

A five-year NFL veteran, third-round draft pick and former All-American at UCF who set 17 school rushing records, Smith uses his own experience as a running back to connect with his players.

Last season at Mississippi, three of Smith’s running backs – Jerrion Early, Snoop Conner and Henry Parrish – ranked in the top 25 of the SEC in total rushing yards. The Rebels totaled 2,829 rushing yards and averaged 217.6 yards per game, a number that ranked third in the SEC.

And at FAU, Smith mentored Buffalo Bills running back Devin Singletary, who became the first NCAA running back to score 29 touchdowns in a single season since Smith did it himself at UCF.

Singletary, whose 32 touchdowns in 2017 rank third all-time in single-season touchdowns, was named Conference USA’s MVP in Smith’s first year at FAU. Singletary went on to become the Owls’ all-time leading rusher before being selected by the Bills in the third round of the 2019 NFL Draft.

“Growing up with the game and kind of being in this generation, learning the fundamentals of the game along the way, I was able to take a lot of what I learned in the League and use it as a coach,” Smith said. “My style, I’m a very aggressive coach. I kind of describe myself more like a boxing trainer who verbalizes things as the play is going. I’m rarely not talking. I’m always trying to give trigger words to create muscle memory for the players and I’m just really, really passionate. 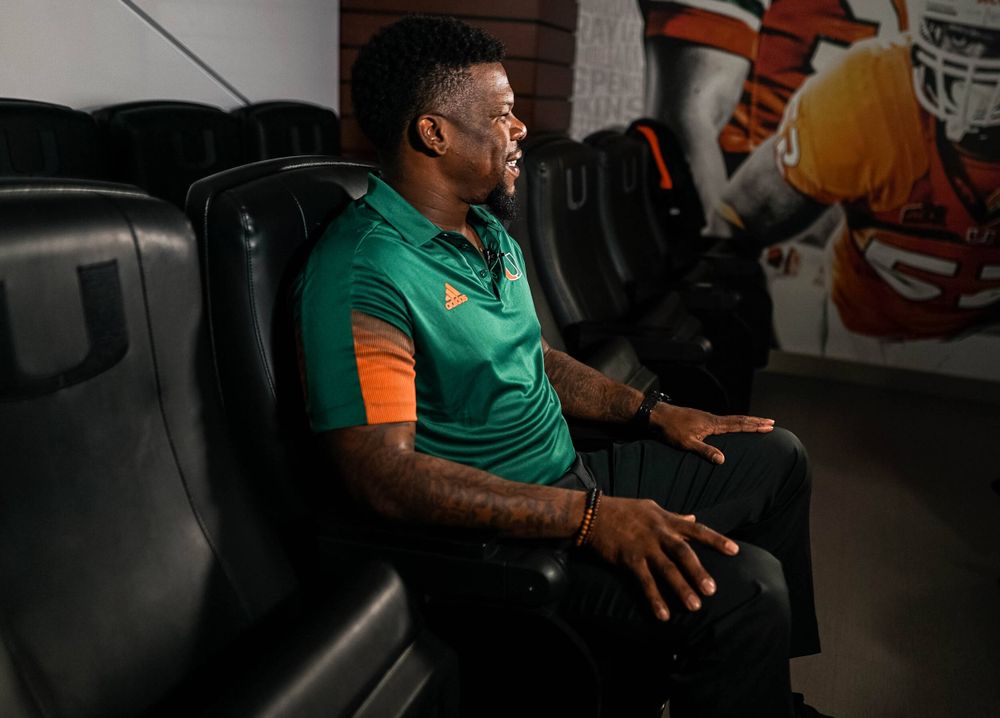 Another area where Smith hopes to impact the Hurricanes? Helping them prepare for their lives after football, whenever that time may come.

Smith left UCF early to pursue his dream of playing in the NFL, but later returned to campus to complete his degree. He interned with the athletic department while studying and it was during that time that the seeds for a coaching career were planted.

“It was fun to come back and be a normal student, kind of appreciate the studying, appreciate being in the classroom,” Smith said. “And I’m older, so none of my coaches have to tell me to sit up in the front. No one has to tell me to introduce myself to the professor. At that point, I’m married and I’m a father. I think that helped me along the way and helped me understand and be able to give the players, all the players on the team, just tips and tell them the importance of really being in the moment and looking beyond the football field when you’re in the classroom. It was a really good experience and I’m really happy I got my degree from UCF.”

Now, Smith’s journey has brought him back to his hometown, close to the family and friends who’ve supported him from the start.

A former standout at Miami’s Southridge High, he knows full well how the South Florida community is impacted when the Hurricanes are doing well. The father of six is eager to help Miami be at its best, all while sharing the journey with his and his wife Tisha’s families.

“The balance of family is really, really important and my kids love it. They love being here. They love being in practice and they love game day. It’s a really neat deal and I’m thankful for their support,” Smith said. “Being in Oxford was really good. And family got a chance to visit. But the support that you get being at home, the chance for them to be around their cousins and some of the friends they grew up with when they were down here was really important…Our families, both of them, are very supportive.”

And Smith hopes that in much the same way his former coaches helped him reach this point, he can make a difference for the players he’ll be working with every day in Coral Gables.

“I know there were some great men that coached in this program. My job every single day is to serve everybody on the team, including coworkers. I just want to be a positive influence every day I walk inside the building,” Smith said. “The football part will take care of itself. I’m very confident in what I do. But one day, when I’m done coaching at the University of Miami, I want them to say ‘Coach Smith continued to make this place better and made the people around him better. He cared and he helped and he loved.’

“I’m very excited. I’m very passionate about what I do. I came here to win. I believe what Coach Cristobal is putting together is a winning formula. I believe in him. I believe in the coaches that he’s hired and although I don’t know the players [yet], I believe in them. As we get to know each other, we’re going to grow. We’re going to create a lot of memories. There will be no better feeling when the University of Miami is playing at a high level and I think it’s going to set the city on fire. I want to be in the heat of the blaze.”