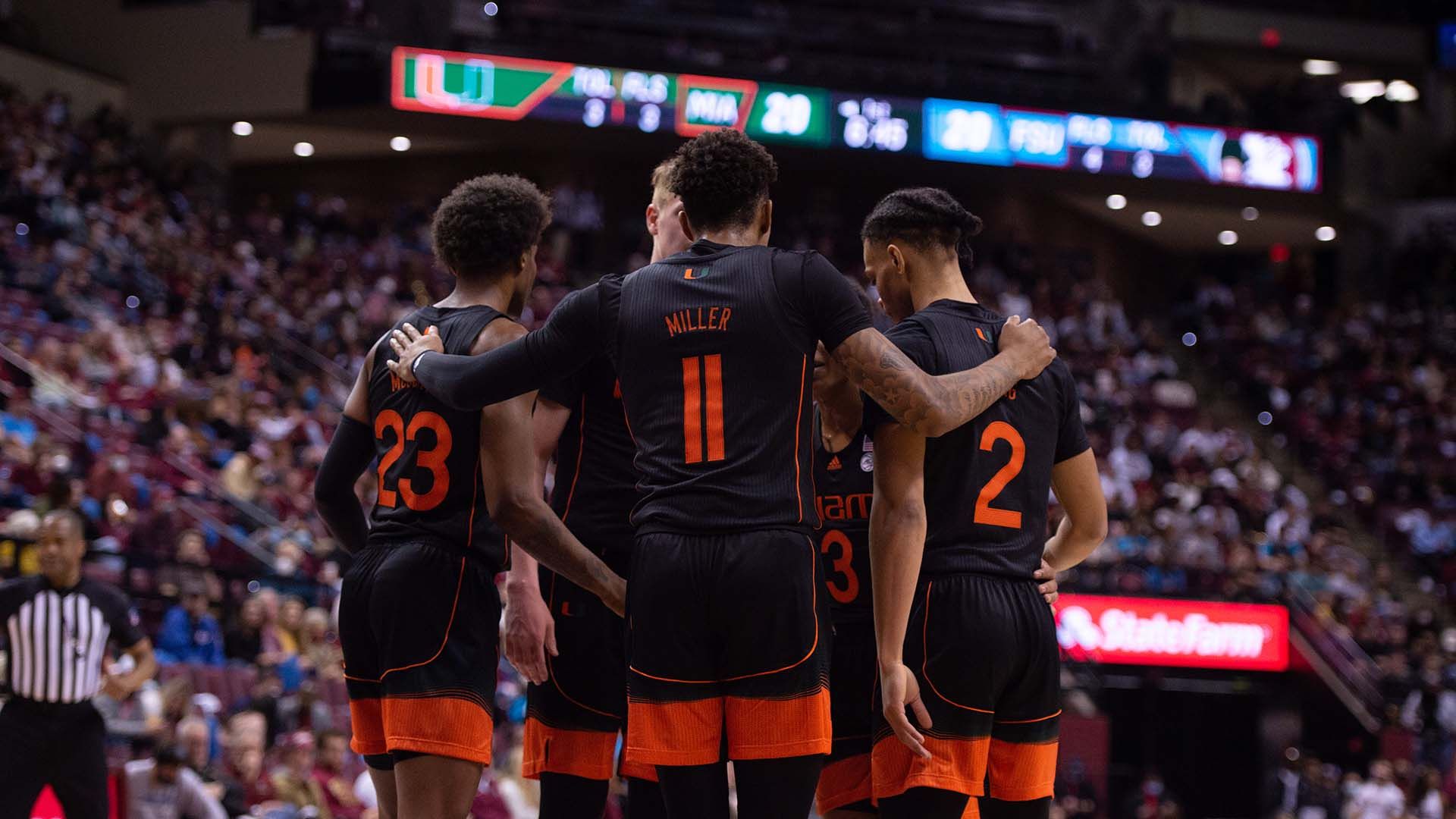 TALLAHASSE, Fla. – Despite leading for over 32 minutes, the University of Miami men’s basketball team fell, 65-64, Tuesday night at Florida State.

Sixth-year redshirt senior guard Charlie Moore paced the Hurricanes with a game-high 20 points, as Miami (13-4, 5-1 ACC) saw its nine-game winning streak come to an end in its first road setback of the year behind a pair of Florida State (9-5, 3-2 ACC) free throws in the final second.

Miami, though, soon responded with nine consecutive points to go back in front, 25-20, with 5:16 left before the break. The Hurricanes went on to take a one-point cushion, 29-28, into the locker room.

The Seminoles shot just 1-of-10 (10.0 percent) from 3-point range in the first half, while Miami notched seven steals and forced 10 turnovers. Florida State, though, recorded a 21-13 edge on the glass, including a 7-2 margin at the offensive end.

Despite Florida State entering the bonus with 10:12 to go, Miami held a four-point lead, 50-46, with under nine minutes remaining. The Seminoles then scored six points in 52 seconds—first with an old-fashioned three-point play and then a 3-pointer—to go up, 52-50, with 7:59 left.

Miami regained the lead, 53-52, on a 3-pointer by third-year sophomore guard Isaiah Wong just 42 seconds later and later upped its advantage to three, 61-58, on a pair of free throws by sixth-year redshirt senior guard Kameron McGusty with exactly two minutes to play.

The Hurricanes still held a one-point lead with under a minute to go, but Florida State redshirt senior forward Malik Osborne drilled a go-ahead 3-pointer to make it 63-61 with 27 ticks left, the Seminoles’ first made field goal in over six minutes.

Miami went back in front on a third-chance corner 3-pointer by Moore with just seven seconds on the clock. That snapped a span of five-plus minutes without a make for the Hurricanes. Florida State senior guard RayQuan Evans, though, hit two free throws with 0.8 seconds left to give the Seminoles the win.

Moore’s 20-point showing came on 8-of-12 shooting, including a 4-of-5 mark from 3-point range. The Chicago native added a game-high six assists, three rebounds and co-game-best three steals before fouling out in the last second.

Freshman guard Matthew Cleveland led Florida State with 15 points on 5-of-7 shooting. Redshirt senior guard Anthony Polite tallied 12 points and a co-team-high eight rebounds, while shooting 4-of-6 from the floor and 4-of-4 at the stripe. Evans scored 11 points in the Seminoles’ victory.

The Hurricanes logged 10 steals, their third straight game in double figures, and forced 15 turnovers while committing 11. The entire game was played within a 12-point window, including the whole second-half within a six-point window.

MIAMI HURRICANES POSTGAME NOTES
– The Hurricanes moved to 36-52 all-time against Florida State, their most common historical foe, including 8-34 on the road and 8-14 in Larrañaga’s tenure.
– Larrañaga, who entered the game with the ninth-most victories of any active Division I coach, is now 683-468 in 38 years as a head coach, including 213-134 in 11 seasons at Miami.
– For the 11th time this season, Miami used a starting lineup of McGusty, J. Miller, Moore, Waardenburg and Wong.
– The Hurricanes lost when leading with 2:00 left for the first time this season (13-1) and for just the 15th time in Larrañaga’s tenure (196-15).
– Miami previously held a perfect 12-0 record when hold its opponent under 50 percent shooting this season.
– The last time Miami led Florida State at the half was 1/27/18, when it held a 45-32 edge on the way to an 80-74 victory, its most recent triumph in the series.
– The Hurricanes’ last loss when leading at halftime was on 3/11/21 versus Georgia Tech in the ACC Tournament quarterfinals.
– Eight different Seminoles scored in the first half, compared to just four Hurricanes, with only one Miami reserve even attempting a field goal.
– When Florida State entered the bonus with 10:12 left on the second-half clock, it had just two fouls of its own.
– Miami had a player foul out for the fifth time this season, with Moore’s disqualification his second of 2021-22.
– McGusty, who surpassed 1,500 points as a collegian on a fast-break basket with 13:44 on the first-half clock, tallied double-figure points for the 79th time, including the 51st as a Hurricane and 16th this year.
– Waardenburg posted a career-high-tying three-block performance for the second consecutive game.
– Wong, who made his 75th appearance at Miami, logged double-digit points for the 49th time, including the 16th in 2021-22.
– Wong recorded his fourth five-assist showing, including his first of the season.
– J. Miller surpassed both 1,050 points and 500 rebounds in his career.
– Moore, who moved past 1,450 points and reached 500 made field goals in his career, registered his 23rd 20-point performance, including his third of the year.
– Moore also scored in double figures for the 67th time, including the 10th this season and fourth game in a row.
– In addition, Moore tallied his 42nd five-assist outing, including his fifth of 2021-22.