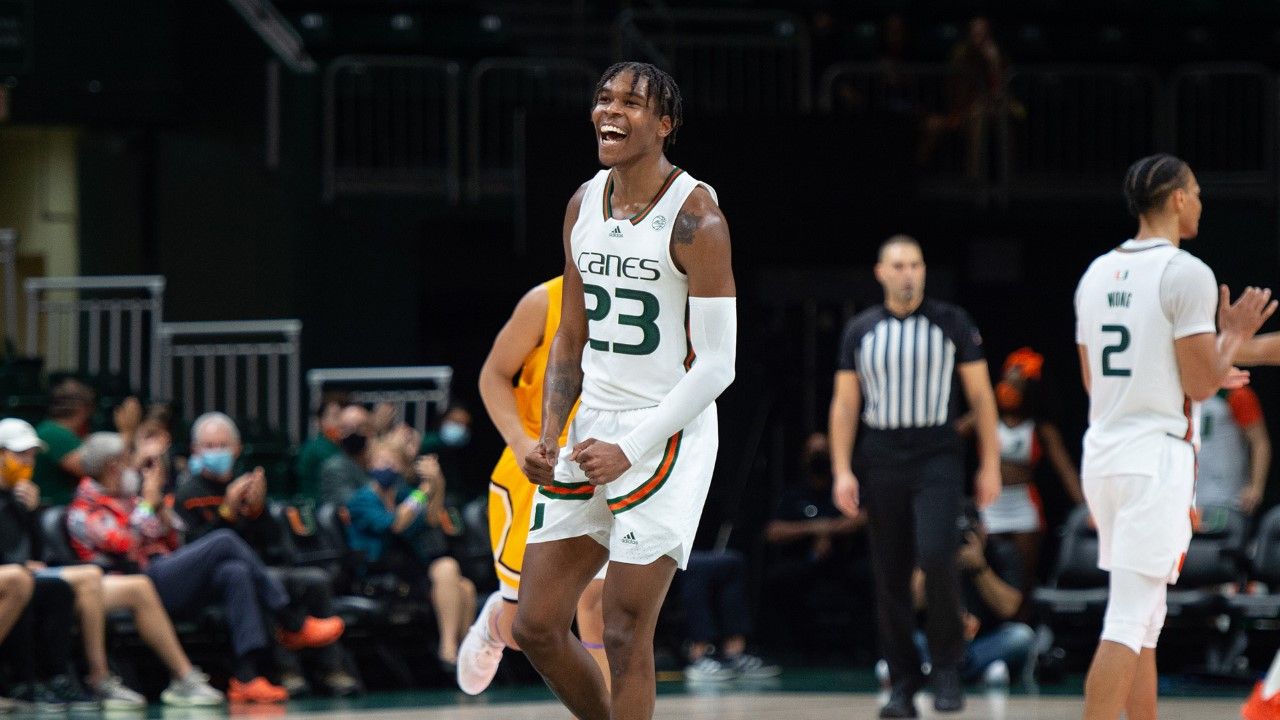 CORAL GABLES, Fla. – The University of Miami men’s basketball team dominated the final 26 minutes of its Wednesday night matchup with Lipscomb, en route to a 76-59 victory at the Watsco Center.

“I thought the guys did a very good job of making adjustments constantly throughout the game,” Miami head coach Jim Larrañaga said. “…We ended up going with a small lineup and those guys did a terrific job. They scrambled, forced some turnovers. They showed some real quickness and athletic ability, and then were able to score in transition.”

Lipscomb (5-5) built an early three-point lead behind a 3-of-6 clip from deep compared to Miami’s 0-of-4 mark. The Hurricanes, however, forced misses on the Bisons’ final six long-range attempts of the half and began to take control of the game.

Miami used a 14-0 run in just 4:25 to turn that three-point deficit into an 11-point edge, 35-24, with 1:17 on the clock. The surge included back-to-back dunks by third-year sophomore guard Isaiah Wong and fourth-year junior guard Jordan Miller, followed by a run-capping 3-pointer by McGusty.

The Hurricanes held Lipscomb scoreless for 5:31, as it committed three turnovers and missed six straight field goals before connecting in the final half-minute to make it a nine-point margin, 35-26, at the break. McGusty tallied 12 points in the opening 20 minutes, shooting 5-of-8 from the floor, while Miller logged three steals and two blocks at the other end.

Lipscomb pulled within eight—the closest it would get—early in the second half, but Miami countered with a 13-5 run to double its advantage to 16, 55-39, with 12:45 to go. Its lead never dipped below 14 points the rest of the way.

The Hurricanes upped their edge as high as 19, their second-largest in any game all year, on their way to a 17-point win, also their second-biggest of 2021-22.

Along with setting a career best in points, McGusty also set new top marks in field goals made and attempted, the former by two and the latter by one. He shot 4-of-7 from 3-point range, made his lone free throw and added a career-best three blocked shots.

“I thought Kam got it rolling and the other guys were very, very confident in his shot-making,” Larrañaga said. “They kept getting him the ball in transition. He made some baskets in the half-court level. We sent him a lot of ball screens; he shot well off the ball screen. Charlie Moore has a good feel for who’s got the hot hand and he was able to get the ball to Kam.”

Wong totaled 20 points on a blistering 9-of-13 shooting, including an 8-of-9 mark inside the arc. Miller logged 12 points, a co-season-high seven rebounds, career-high five steals and career-high three blocks, the latter three marks leading or co-leading all players Wednesday. Moore chipped in eight points, a season-high six rebounds and four assists.

Just one Lipscomb player finished with double-digit points, as sophomore forward Kaleb Coleman totaled 12 off the bench. Five others notched between six and nine points in the setback.

The Hurricanes, who shot over 50 percent in both halves, ended the night with a 51.6 percent ledger (33-of-64), their second-highest mark of the season. They also held Lipscomb below 40 percent in both frames and to just a 37.1 percent tally (23-of-62) overall.

In addition, Miami’s 11 steals tied its top total of the year, while its 18 assists tied for second-highest mark.

The Hurricanes now travel to the Barclays Center in Brooklyn, N.Y., where they square off with Fordham Sunday at 11:30 a.m. in the Basketball Hall of Fame Invitational, live on FloSports.

MIAMI HURRICANES POSTGAME NOTES
– The Hurricanes claimed the opening meeting between Miami and Lipscomb, marking their third win of the season in a first-time matchup.
– Larrañaga, who entered the game with the ninth-most victories of any active Division I coach, is now 677-467 in 38 years as a head coach, including 207-133 in 11 seasons at Miami.
– With 677 victories in his career, Larrañaga passed Denny Crum and moved into a tie with Mike Montgomery for No. 33 on the all-time Division I wins list.
– For the seventh time this season and fifth in a row, Miami used a starting lineup of McGusty, J. Miller, Moore, Wong and sixth-year redshirt senior forward Sam Waardenburg.
– Miami improved to 4-0 under Larrañaga when playing a non-conference game immediately following a November or December ACC contest.
– Two Hurricanes scored 20-plus points for the second time this season, joining the 11/13/21 matchup with UCF, when McGusty (28) and Wong (20) also did so.
– The last time Miami shot over 50 percent in both halves was 11/26/21 against North Texas in Kissimmee, Fla., in the ESPN Events Invitational.
– The other game in which Miami logged 11 steals this year was 11/13/21 versus UCF.
– Sixth-year redshirt senior center Rodney Miller Jr., made his 75th collegiate appearance.
– Freshman guard Bensley Joseph, who eclipsed 100 minutes in his young career, set new highs in minutes (19), rebounds (four) and assists (two).
– Wong, who surpassed 850 points as a Hurricane, registered his 17th 20-point showing, including his third this season.
– In addition, Wong scored in double figures for the 42nd time, including the ninth this year.
– McGusty, who surpassed 500 made field goals in his career, logged his 17th 20-point performance, including his 11th at Miami and fourth in 2021-22.
– Additionally, McGusty tallied double-digit points for the 72nd time, including the 44th as a Hurricane and ninth this season.
– McGusty’s prior career high in made field goals was 10, set 3/11/21 against Georgia Tech in the ACC Tournament quarterfinals in Greensboro, N.C.
– In addition, McGusty’s prior career high in points was 28, recorded on both 11/13/21 versus UCF and 12/21/19 against Coppin State.
– J. Miller tallied double-digit points for the 52nd time, including the second this season, with the two coming back-to-back.
– J. Miller also became the first Hurricane with five steals in a game since 1/5/21.
– Additionally, J. Miller became the second Division I player this season to log 12 points, seven rebounds, five steals and three blocks in a game, including the first to do so with no turnovers.
– Moore logged six-plus rebounds for the 10th time in his career.
– Freshman guard Wooga Poplar tied his career high in rebounds (five) and set a new top mark in assists (four).