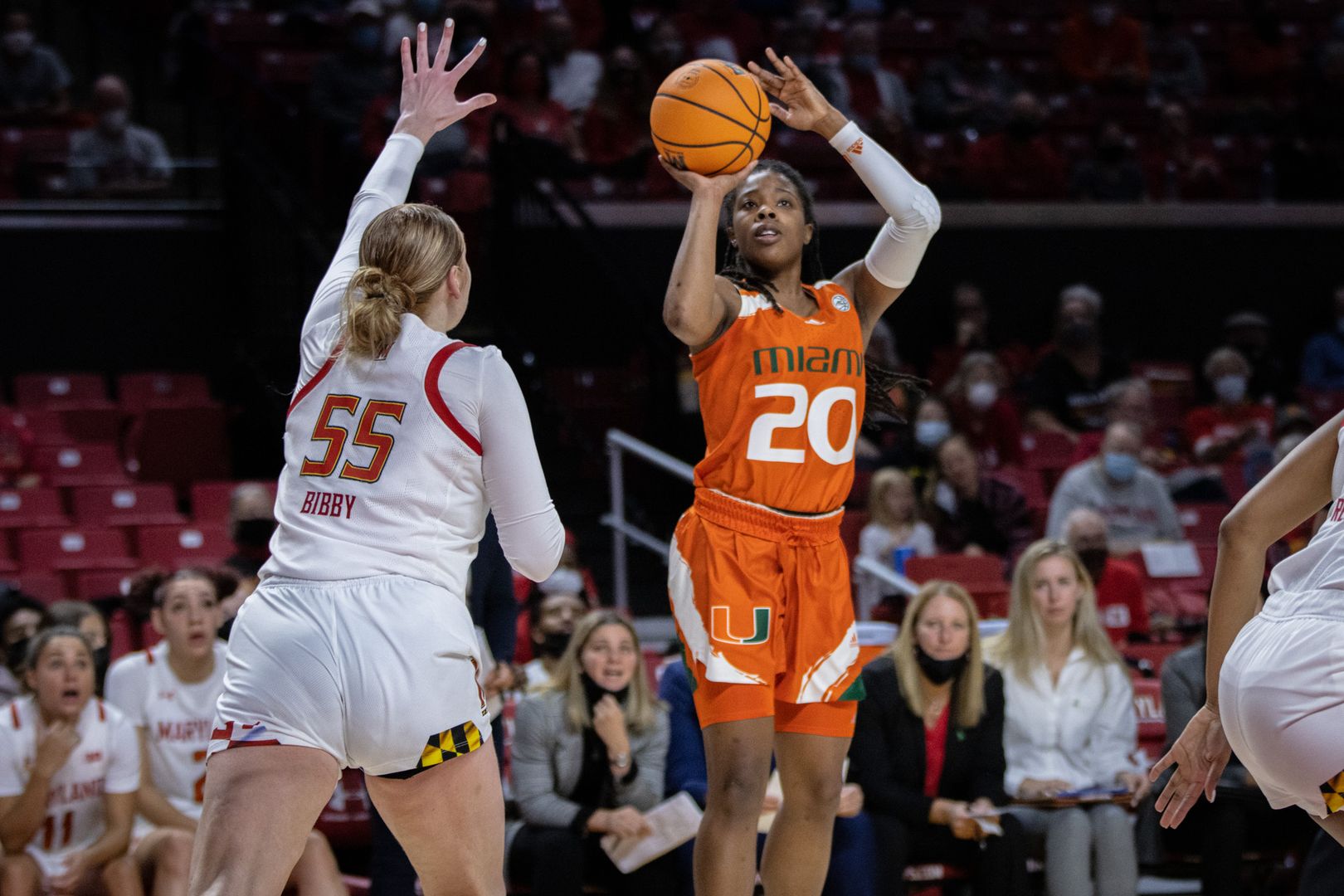 Miami Battles No. 8/8 Maryland to the Final Minute

COLLEGE PARK, Md. – The University of Miami women’s basketball team took another top-10 down to the final minutes, dropping an 82-74 decision to No. 8/8 Maryland Thursday night at the Xfinity Center.

“I think the crowd and whoever watched on TV saw a really entertaining basketball game,” head coach Katie Meier said. “We love this game. Brenda [Frese] is just fantastic and it is always a game where you see unbelievable performances by really great players.”

The Canes’ offense was clicking from the get-go, starting the game 6-of-7 from the field to take an early 13-8 lead over the Terrapins. Djaldi-Tabdi tallied seven of Miami’s 18 points in the quarter, shooting a perfect 3-for-3 in the frame. Freshman Lashae Dwyer scored five straight points for the Canes to give Miami an 18-17 lead after one.

Maryland settled in during the second quarter, beginning the frame on a 9-1 run to go up, 26-19. However, after a quiet first quarter, Marshall stepped up for the Canes, scoring 10 points in the second, including a go-ahead 3-pointer from three feet behind the arc. Marshall knocked down 4-of-5 shots in the second to make it tie game, 36-36, heading into halftime.

Miami continued to apply the pressure in the third quarter, shooting 60 percent from the field and pouring in 4-of-7 from 3-point range. With six lead changes in the frame, the teams continued to trade baskets until Marshall hit a 3-pointer to put Miami ahead, 60-57.

The game remained a one-possession contest through the first seven minutes of the final quarter. Ultimately the game came down to the free-throw line as Maryland shot 27 free throws in the second half, compared to Miami’s 10. The Terrapins closed the game on a 10-2 run to take the 82-74 victory.

“We have a lot of new and a lot of freshmen who had some breakout performances today,” Meier said. “Games like this are why I coach. I love being on the road and playing top 10 teams.”

Miami returns home on Sunday to host the Tulane Green Wave in the second game of the Miami Holiday Classic. The game is set to tipoff at 2 p.m. and will air on ACC Network Extra.