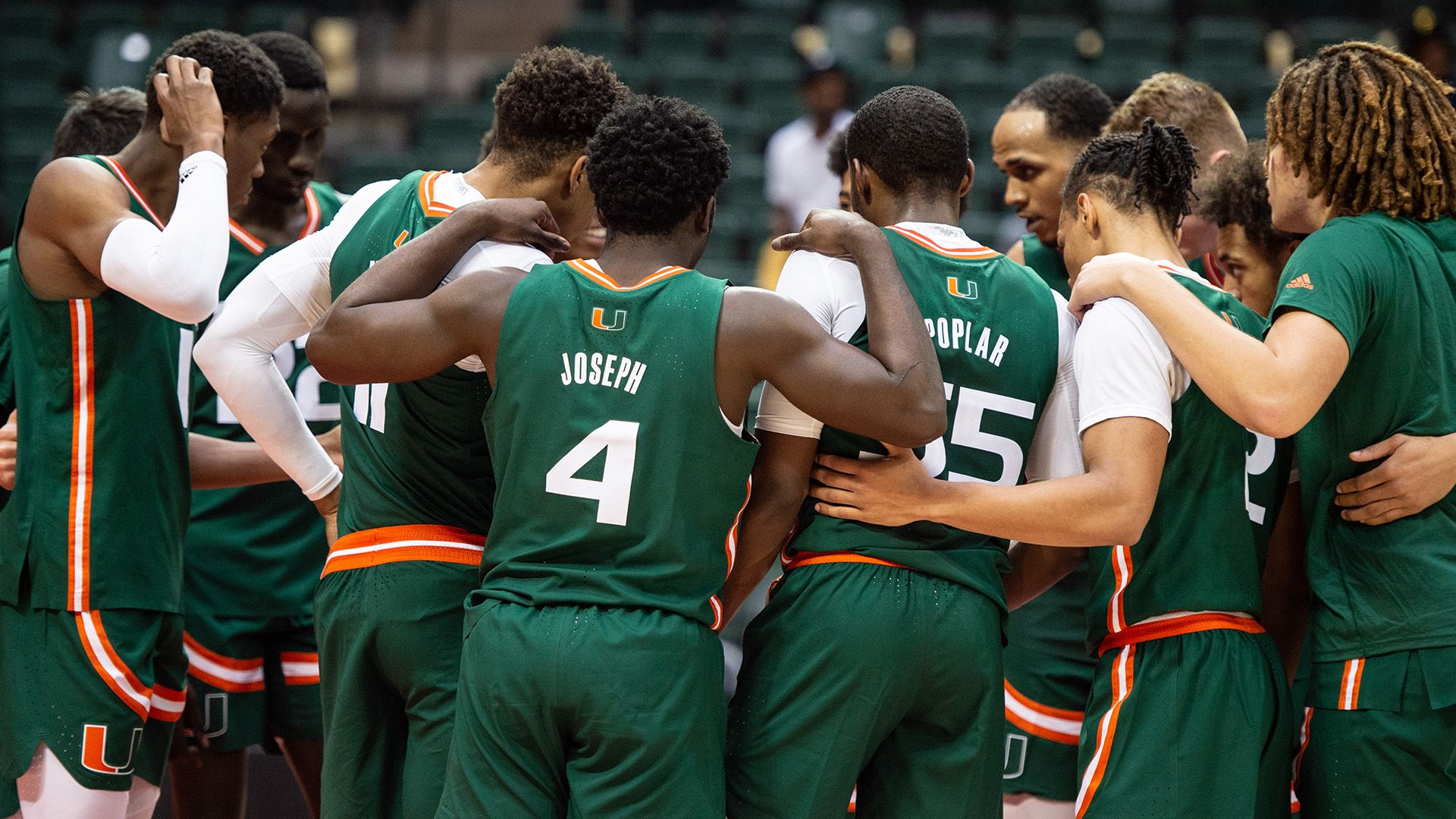 KISSIMMEE, Fla. – The University of Miami men’s basketball team led No. 10/9 Alabama for nearly 17 first-half minutes, but could not slow down the reigning SEC champions in the second session of a 96-64 setback to conclude the ESPN Events Invitational.

“I thought the starters played well for 15 minutes, but as soon as we went to our bench, we lost our lead and our composure,” Miami head coach Jim Larrañaga said. “The second half, we just couldn’t do anything right. Once Alabama started rolling, we couldn’t stop them.”

Miami used a 13-2 run, including scoring eight straight points, midway through the first half to take a nine-point lead, 27-18, with 6:22 on the clock. The burst included six points by McGusty, two of them after a technical foul on Alabama (6-1) head coach Nate Oats.

The Crimson Tide, however, closed the half on a 15-3 run to take a three-point edge, 33-30, into the locker room. Eight of those points came consecutively in the final 2:13, with junior guard Jahvon Quinerly’s buzzer-beating 3-pointer breaking a would-be tie at the intermission.

The Hurricanes led for 16:47 of the opening 20 minutes, buoyed by McGusty’s 10 points, eight rebounds and two steals.

The Hurricanes quickly pulled back within six, but Alabama controlled play for the rest of the game, en route to victory in the tournament’s fifth-place matchup.

“They were just faster than us,” Larrañaga said of the Crimson Tide’s second-half showing. “They beat us down the floor, they drove the ball to the basket, they got layups and got open threes. We couldn’t stop the dribble penetration and we couldn’t contest the threes well enough to make them miss.”

McGusty’s 21 points came on 8-of-13 shooting from the field, including a 2-of-4 mark from deep, to go along with a 3-of-4 mark at the line. His 10 rebounds led all players and gave him a double-double for the second consecutive outing.

Third-year sophomore guard Isaiah Wong registered 14 points, including Miami’s first six of the second half. He shot 4-of-7 from the floor and 6-of-6 at the line. Sixth-year redshirt senior guard Charlie Moore added 12 points on 5-of-11 shooting.

Alabama senior guard Keon Ellis paced all players with 22 points, finishing 8-of-11 from the floor, 5-of-6 from deep and 1-of-1 at the line. Junior guard Jaden Shackelford scored 15 points, while redshirt sophomore forward Juwan Gary posted 13.

“We have to play a whole lot better because we’ve got a very tough schedule coming up,” Larrañaga said. “We already have played a tough schedule. That was a very, very disappointing performance.”

Up next for Miami is a visit to the Bryce Jordan Center in University Park, Pa., where it faces Penn State Wednesday at 9:15 p.m., live on ESPNU in the Big Ten/ACC Challenge Presented by Continental Tire.

MIAMI HURRICANES POSTGAME NOTES
– The Hurricanes moved to 1-3 all-time against Alabama, including 0-1 at neutral sites and 1-1 in Larrañaga’s tenure.
– Larrañaga, who entered the game with the ninth-most victories of any active Division I coach, is now 674-467 in 38 years as a head coach, including 204-133 in 11 seasons at Miami.
– For the fourth time this season and second in a row, Miami used a starting lineup of McGusty, Moore, Wong, fourth-year junior guard Jordan Miller and sixth-year redshirt senior forward Sam Waardenburg.
– The Hurricanes fell to 77-57 in multi-game events, including 54-31 since the program rebirth (1985-86), 16-11 under Larrañaga and 2-4 at the ESPN Wide World of Sports.
– Miami last played a team ranked top-10 in both polls on 2/8/20, when it dropped a 99-81 decision at eighth-ranked Florida State.
– The Hurricanes allowed 90-plus points under Larrañaga for just the 12th time, falling to 2-10 in such games.
– Sunday marked just the fourth time Miami has lost by 30-plus in Larrañaga’s tenure, including just the first in non-conference action.
– Miami’s three opponents in the ESPN Events Invitational combined to shoot 40-of-77 (51.9 percent) from 3-point range, with all three making 11-plus shots and all three posting a clip over 43.0 percent.
– Two of the Hurricanes’ three opponents in the tournament shot over 63.0 percent in the second half, as Alabama posted a 63.9 percent clip (23-of-36) and Dayton shot 65.0 percent (13-of-20) after the break Thursday.
– The Crimson Tide made 11 consecutive shots at one point during the second half, five of which came from 3-point range.
– The last time the Hurricanes allowed 16-plus 3-pointers in a game was 1/21/21, when Boston College made 18 on its home court.
– Alabama scored 63 points in the second half, the second-most Miami has allowed in a frame since it joined the ACC in 2004-05, trailing only the 64 it conceded at third-ranked North Carolina in the second half on 1/31/07.
– Davison is the first Miami opponent to post double-digit assists since Notre Dame’s Prentiss Hubb had 10 on 2/23/20.
– McGusty registered 20-plus points for the 16th time, including the 10th at Miami and third this year.
– In addition, McGusty scored in double figures for the 69th time, including the 41st as a Hurricane and sixth this season.
– McGusty also posted his fifth double-digit rebounding total and fifth double-double, all of which have come at Miami, including three this season.
– Wong, who surpassed 800 points as a Hurricane, tallied double-digit points for the 39th time, including the sixth this year.
– Moore logged double-digit points for the 61st time, including the fourth in 2021-22.
– Third-year sophomore guard Filippos Gkogkos made his season debut, checking in for the final 2:11.
– Freshman forward Thomas Oosterbroek made his collegiate debut, playing the last 1:38.