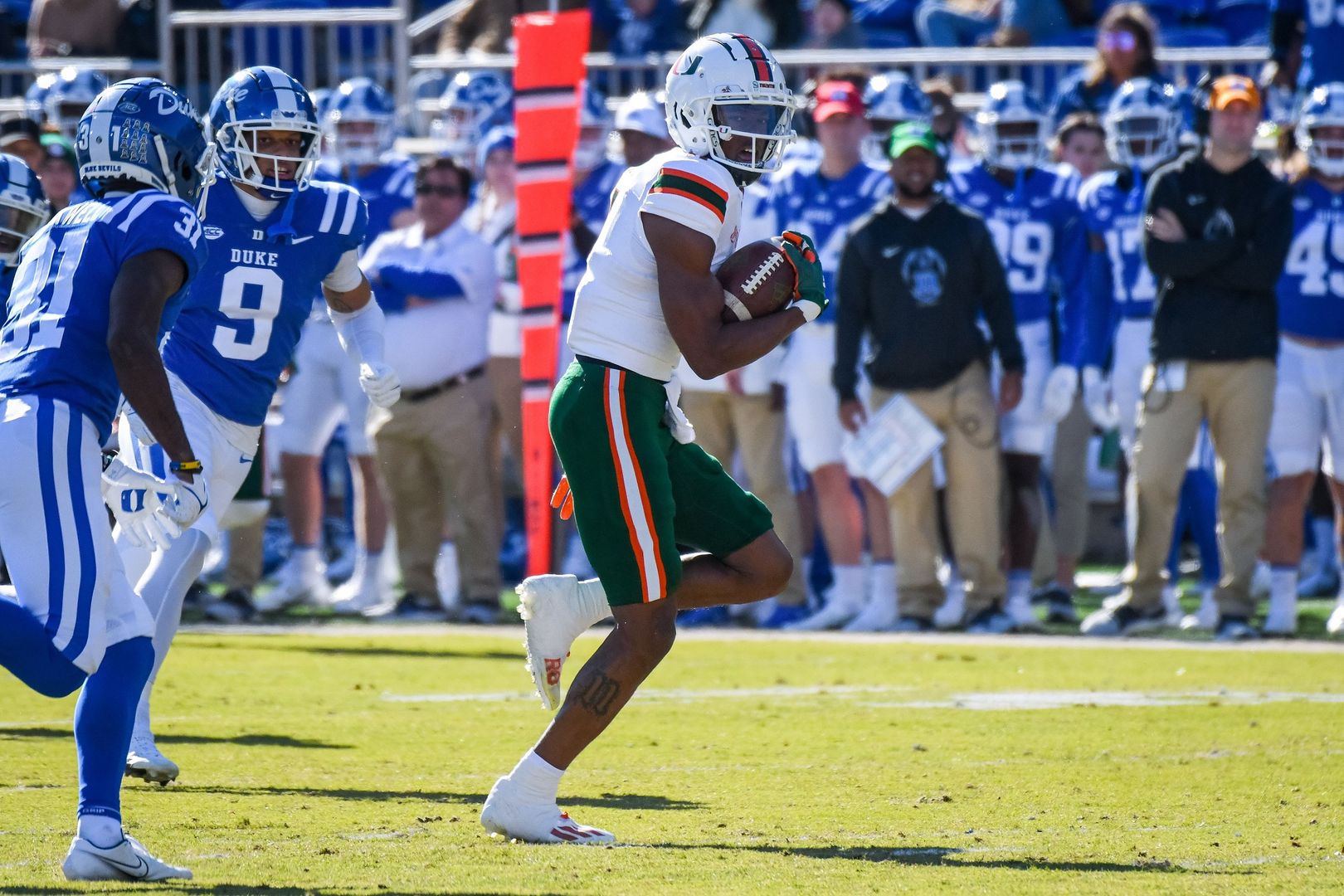 The Hurricanes outgained the Blue Devils, 530-219, and held Duke to just 15 first downs.

“Proud of our football team. Proud of our finish,” head coach Manny Diaz said. “So many guys contributed to today’s victory. It was great to see.”

Rambo clinched the record on a spectacular touchdown catch in the third quarter, while Harley finished with a program single-game record 13 catches.

The victory marked Miami’s fifth in its final six games of the season, propelling the Hurricanes from a 2-4 start to a 7-5 finish.

“We’ve been able to identify every week, ‘What is in front of us right now? Where are our feet at? Let’s win where our feet are at,'” Diaz said. “That’s why I think they’ve showed the resiliency and mental toughness to be able to win win five out of six and turn 2-4 into 7-5.”

Until Midnight: Buy a Commemorative Ticket

Buy the final digital commemorative ticket of the regular season from today’s victory at Duke!

Quarterback Tyler Van Dyke delivered another spectacular start for the Hurricanes with 370 yards on 32-of-47 passing, three touchdowns and no interceptions. It was Van Dyke’s sixth consecutive game with at least 300 yards and three touchdown passes.

“It’s been a crazy year – a lot of highs and a lot of lows,” Van Dyke said. “I didn’t expect to have serious [playing] time this year. To step into that position and do what I’m doing, I have to give credit to Coach [Rhett] Lashlee.”

The Hurricanes start was slow compared to their red-hot finish, with Duke taking a 10-3 lead in the first quarter on a 94-yard kickoff return from Jaylen Stinson. But Miami (7-5, 5-3 ACC) ripped off 44 unanswered points to seal the win in front of 17,391.

Running back Jaylan Knighton scored on a touchdown run while wide receiver Xavier Restrepo had his second touchdown catch of the season during the outburst.

Sandwiched in between those two scores in the second quarter was a 12-yard touchdown strike from Van Dyke to Rambo.

The Texas native outdid himself in the second half when he hauled in a one-handed touchdown grab with 7:15 left in the third quarter to push Miami’s lead to 40-10.

Duke (3-9, 0-8 ACC) scored on its first possession but went scoreless on its final nine drives on offense. Cornerback Marcus Clarke recorded his first interception of the season and second of his career on Duke’s final offensive possession.

Harley not only eclipsed the career catch record, but set Miami’s single game standard with 13 grabs. The previous mark of 12 was tied by Rambo earlier in the year.

“It’s a blessing. I’m not here by mistake,” Harley said. “I guess that was my purpose – to be here at this university and to be the receptions leader. Showing younger guys, this is my testimony – I pray I’ll be motivation to the younger guys that come into this program in the future.”

The Hurricanes await their bowl fate, which will be announced on Dec. 5.