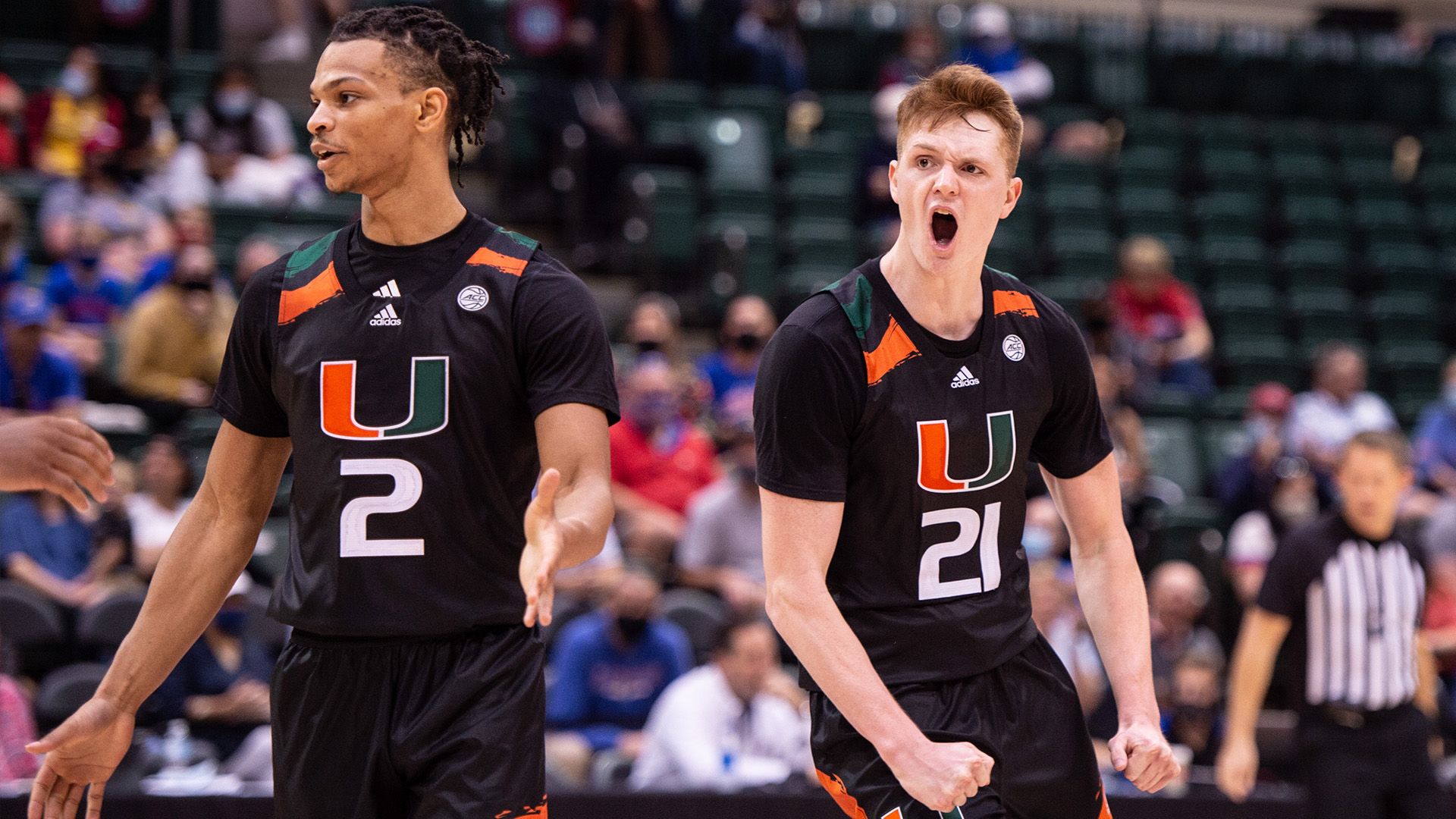 KISSIMMEE, Fla. – The University of Miami men’s basketball team rallied back from a 12-point halftime deficit to defeat North Texas, 69-63, Friday in its second outing of the ESPN Events Invitational.

“I thought our physical effort in the first half just wasn’t good enough at the defensive end of the floor to stop them. They had 40 points, they shot the ball great from three, they shot it great from two,” Miami head coach Jim Larrañaga said. “But at halftime, we just talked about how important pure, physical effort is. We did a fantastic job in the second half holding them to 23 points after giving them 40 in the first half. At the same time, our guards really started to share the ball and get some better looks.”

Both teams put on impressive first-half offensive displays, but the Mean Green’s 3-point shooting set them apart. North Texas (2-3) started 4-of-5 from deep through five minutes, then sat at 7-of-10 after 11 minutes and 8-of-12 through 13 minutes.

Miami, which made its first four shots, went 10-of-20 from the field and 7-of-8 at the line in the first half, despite its 12-point deficit. McGusty had a game-high 10 points at the break, connecting on all six of his free throws. Sophomore guard Rubin Jones led North Texas with nine points, shooting 3-of-3 from deep to help his team to a 9-of-18 clip at the intermission.

The Hurricanes came out of the locker room scorching hot to open the second half, scoring 24 of the first 32 points to take a four-point lead, 52-48, with 11:39 to go. The burst included a stretch during which Miami made 10 of 11 field goals, including six in a row, and had both 7-0 and 9-0 runs.

“Coach [Bill] Courtney, who is our offensive coordinator, had mentioned a few things that he had observed,” Larrañaga said of Miami’s second-half start. “So, we ran a couple of plays to get Isaiah a basket, to get Kam McGusty a basket. Every time one of them worked, our confidence grew.”

After some back-and-forth basketball, the score sat level at 59 with under three minutes left, but Miami broke the deadlock on a McGusty layup, through a foul, with 2:35 remaining. Wong doubled the lead on a baseline pull-up jump-shot with 1:18 to go and McGusty upped it to six, 65-59, on a pair of free throws with 21 ticks left.

A layup by Jones—his only basket of the second half—six seconds later trimmed the deficit to four, but McGusty again sank a pair of free throws to effectively ice the game. Both teams scored two points in the last 10 seconds, as Miami earned the six-point win.

Wong’s 21-point performance came on 9-of-17 shooting, while McGusty finished with 18 points and 12 rebounds, the latter mark leading all players and setting a new career high. The Katy, Texas, native, who grabbed 10 of his boards after halftime, also notched a game-high three steals, drew nine fouls and went 10-of-11 from the stripe.

“I thought yesterday Kam struggled a good bit and he didn’t play much in the second half because of it, whereas today I didn’t even want to take him out,” Larrañaga said. “He had to ask to be taken out two different times because he was going so hard. That’s what you want from your leaders. You want their effort to be so good that they need a rest and then go back in and sustain it again.”

Miami wraps up play in the ESPN Events Invitational Sunday at 6:30 p.m. against the winner of the matchup between No. 10/9 Alabama and Drake.

MIAMI HURRICANES POSTGAME NOTES
– The Hurricanes claimed the first all-time meeting between Miami and North Texas.
– Larrañaga, who entered the game with the ninth-most victories of any active Division I coach, is now 674-466 in 38 years as a head coach, including 204-132 in 11 seasons at Miami.
– With 674 victories, Larrañaga is now tied with Lon Kruger for No. 35 on the all-time Division I wins list.
– For the third time this season, Miami used a starting lineup of McGusty, Moore, Wong, fourth-year junior guard Jordan Miller and sixth-year redshirt senior forward Sam Waardenburg.
– The Hurricanes improved to 77-56 in multi-game events, including 54-30 since the program rebirth (1985-86), 16-10 under Larrañaga and 2-3 at the ESPN Wide World of Sports.
– Playing in a morning game for just the sixth time in Larrañaga’s 11 seasons, Miami moved to 5-1 in such contests.
– Through the Hurricanes’ first 53 minutes of action in the ESPN Events Invitational, their opponents shot 19-of-31 (61.3 percent) from 3-point range, as Dayton went 11-of-19 Thursday.
– Miami took its first second-half lead, 50-48, on a 3-pointer by Moore with 12:16 left and then doubled the advantage on a layup by J. Miller 37 seconds later.
– The last time Miami won a game after trailing by 10-plus points at halftime was 12/8/20, when it came back from an 18-point deficit at the break to beat Purdue.
– The Hurricanes’ last win when trailing by double digits at any point was also the 12/8/20 game versus Purdue, in which its largest deficit was 20.
– North Texas’ 13 made 3-pointers marked the highest total by a Miami foe since Wake Forest made 13 on 1/30/21.
– Miami’s 81.3 percent clip from the line was its second-best of the season, trailing only the 83.3 percent (10-of-12) ledger it recorded one day prior against Dayton to begin the ESPN Events Invitational.
– In half of Miami’s six games this year, McGusty has registered at least 10 made free throws and 11 free-throw attempts.
– McGusty, who surpassed both 1,300 points and 350 rebounds as a collegian, scored in double figures for the 68th time, including the 40th at Miami and fifth this season.
– In addition to being his second in just six games this season, McGusty’s double-double was the fourth of his career, all of which have come as a Hurricane.
– Waardenburg eclipsed 450 points at Miami.
– Moore, who moved past both 1,300 points and 3,250 minutes played in his career, logged his 60th double-digit point total, including his third this year.
– Wong scored 20-plus points for the 16th time, including the second in 2021-22, as well as scored in double figures for the 38th time, including the fifth this year.
– J. Miller made his 75th appearance as a collegian.