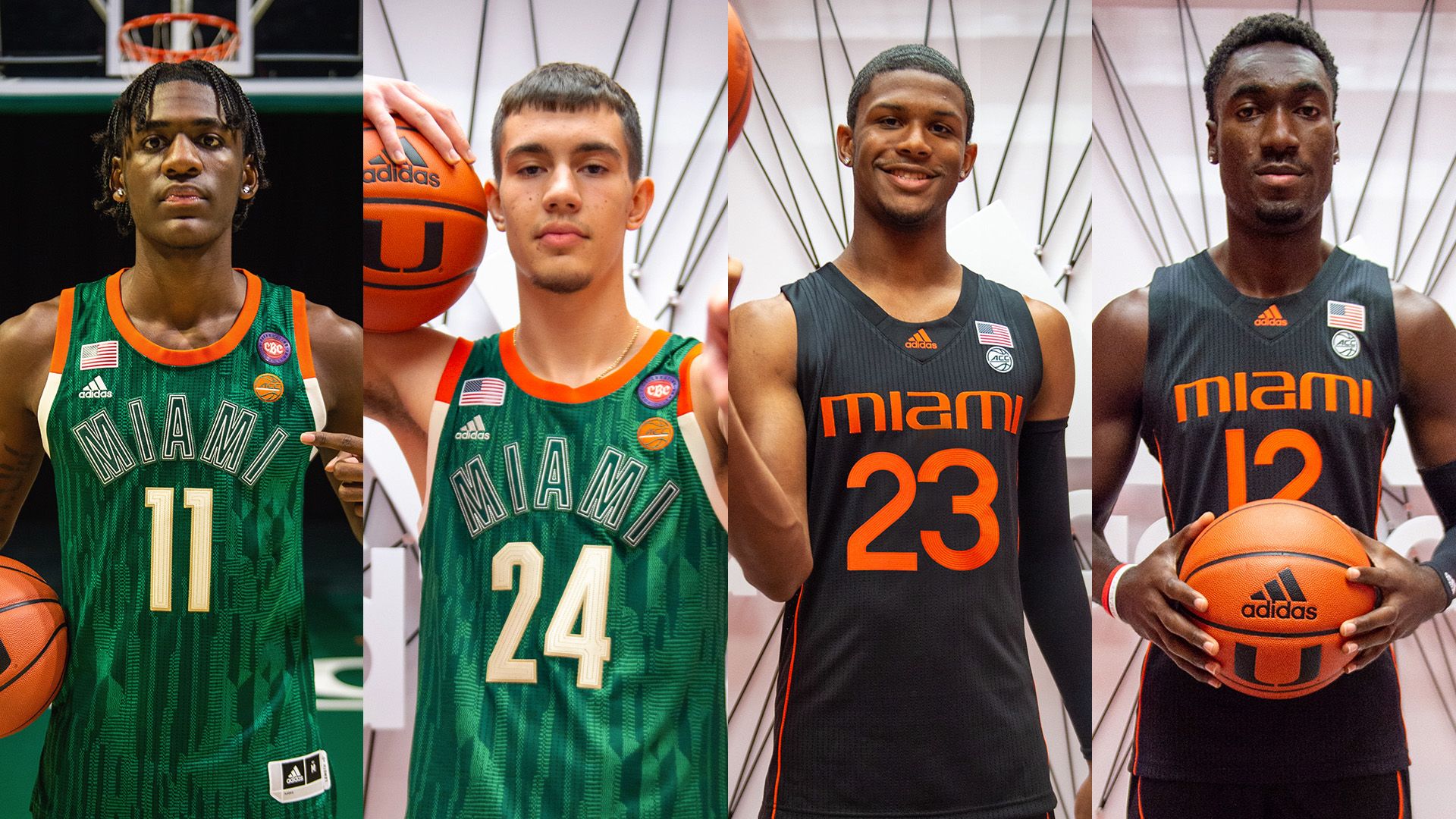 The Hurricanes have officially added Favour Aire, AJ Casey, Danilo Jovanovich and Christian Watson to the program. The quartet forms the nation’s No. 17 recruiting class—tops in Florida and sixth-best in the ACC—according to the 247Sports Composite Class Calculator.

“I am thrilled to welcome Favour, AJ, Danilo, Christian and their families into the Hurricane basketball program,” Larrañaga said. “All four of them fit exactly what we are looking for in a high school recruit. Each is a tough, talented player who has faced strong competition and is ready to work hard at the next level. My staff and I cannot wait to get them on campus and begin coaching them.”

The tallest high school recruit to sign with Miami since Deng Gak in the class of 2017, Aire checks in at 6-foot-10 and 212 pounds. A native of Ekpoma, Edo State, Nigeria, the power forward/center attends Bishop McNamara High School in Forestville, Md.

Aire, who competed for New World on the adidas 3SSB circuit, holds the No. 59 spot in the Rivals rankings, checking in at No. 12 among centers. He also places No. 97 on the 247Sports list and No. 106 in the 247Sports Composite rankings, taking the No. 16 and No. 18 spots, respectively, at his position. Each of those outlets, along with ESPN, consider him a four-star prospect and the fourth-best player in the state of Maryland. 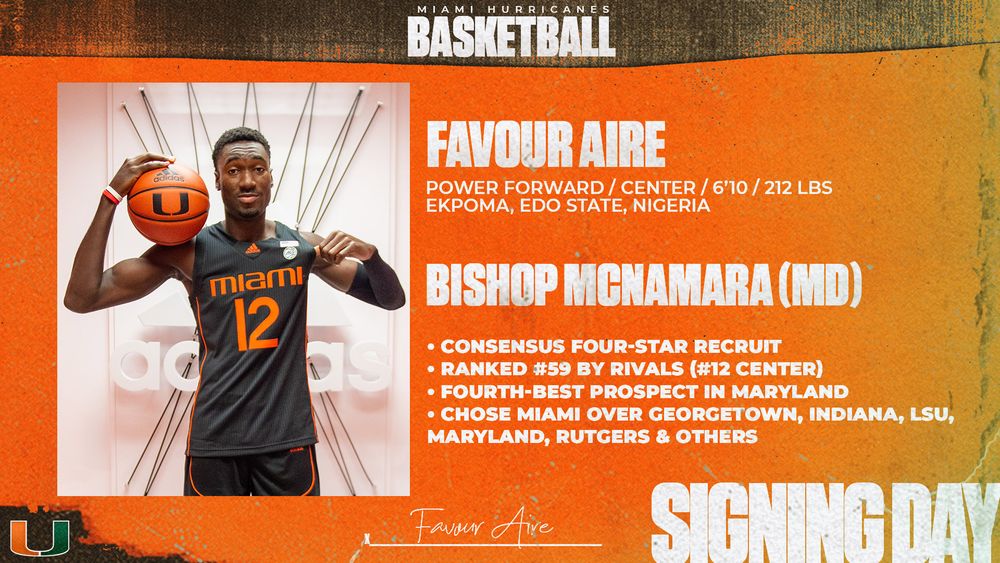 Tabbed by The Washington Post as an All-Met Honorable Mention as a sophomore in 2019-20, Aire held offers from programs such as Georgetown, Georgia, Indiana, LSU, Louisville, Maryland, Pittsburgh, Rutgers and Virginia Tech, per 247Sports.

“Favour is an outstanding talent. He’s a big guy with tremendous ball skills; he can shoot the three, put the ball on the ground and post up,” Larrañaga said. “He has an excellent jump-hook. Defensively, he’s an exceptional rebounder and shot-blocker.”

A 6-foot-8, 205-pound forward from Chicago, Casey is the highest-rated pledge among Miami’s signees. A unanimous four-star recruit, he comes in at No. 55 and No. 57 overall according to Rivals and ESPN, respectively, while placing No. 67 in the 247Sports Composite rankings. 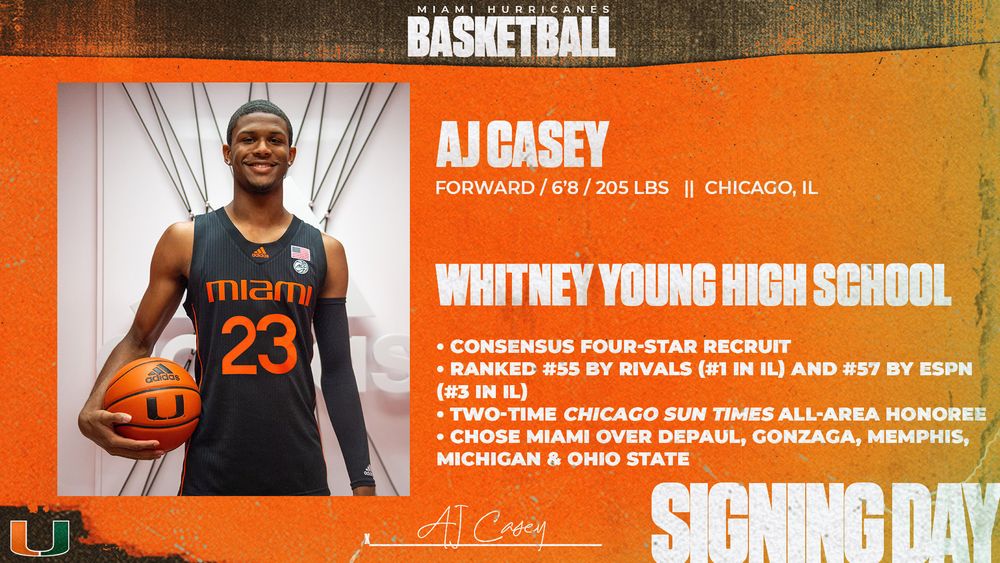 “AJ plays in a very tough high school league in Chicago. He’s also played against the best players in the Nike EYBL events,” Larrañaga said. “His size, athletic ability and versatility allow him to be very efficient both inside and outside on offense, as well as very flexible on defense.”

Jovanovich, a 6-foot-8, 200-pound forward from Milwaukee, joins The U from Whitnall High School, the alma mater of Miami HEAT standout Tyler Herro. A consensus top-five player in the Badger State, Jovanovich places No. 198 in the 247Sports Composite rankings.

Both 247Sports and the 247Sports Composite and consider Jovanovich to be a top-45 small forward in the country, while ESPN ranks him as the nation’s No. 31 power forward. Each of those outlets, as well as Rivals, consider him a three-star recruit. 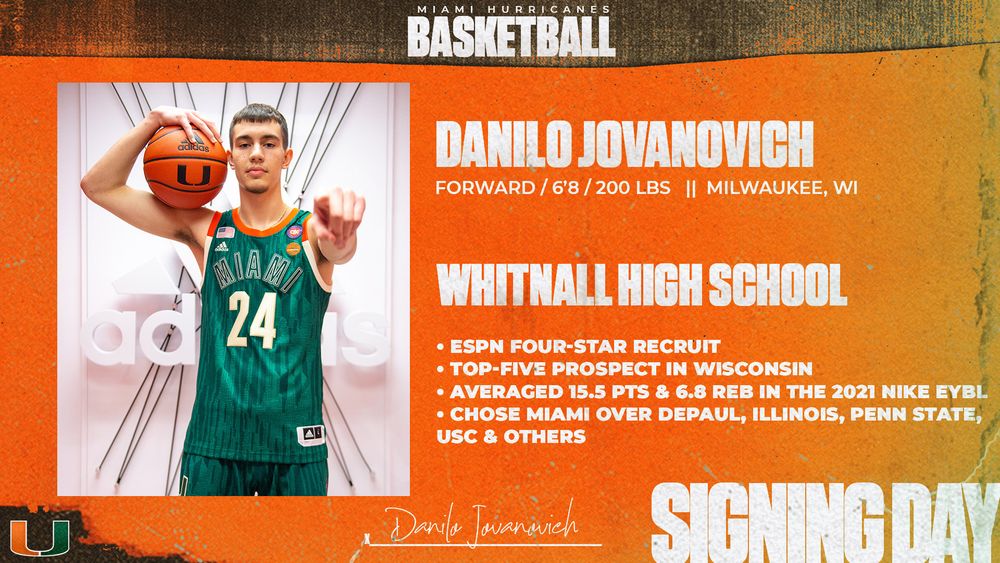 Jovanovich competed for Phenom University-Team Herro in the Nike EYBL, averaging 15.5 points, 6.8 rebounds and 2.2 assists per game to rank sixth in Cerebro Sports’ C-RAM score, which compares an individual to a replacement player, similar to WAR. He held offers from programs such as DePaul, Illinois, Penn State and USC, per 247Sports.

“Danilo is clever player who has a lot of craftiness in his game. As a left-hander, he’s really good in around the basket,” Larrañaga said. “He’s an excellent driver, but he’s also a terrific passer and he really does a great job of finding the open man. He was very much a glue guy for his AAU team, Phenom U, and that’s something we’ll want him to be at Miami.”

Labeled a four-star prospect and top-30 small forward by both ESPN and 247Sports, Watson comes in at No. 87 and No. 109 in their respective rankings. He also holds the No. 140 spot on the 247Sports Composite list. All three tab him as the best prospect at a Washington, D.C., high school. 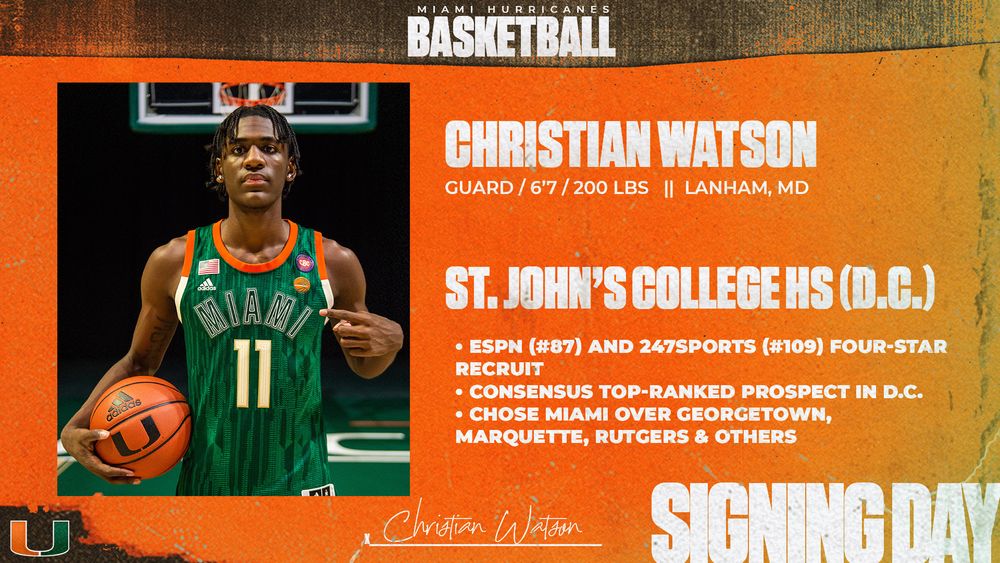 Watson selected Miami over Georgetown, Marquette and Rutgers, amongst other offers. He played his grassroots basketball for DC Premier on the UA Association circuit.

“Christian is a high-octane, multifaceted offense player. He can play the one, the two or the three. He can shoot the three and he can drive it to the basket,” Larrañaga said. “He has played in the best high school basketball league in the country, in Washington, D.C., the WCAC. He has played against some of the best players in the country and has proven himself to be a very efficient player.”

The 2021-22 Hurricanes resume play Saturday at 2 p.m. when they host UCF at the Watsco Center, with action set to be televised live on ACC Network Extra.