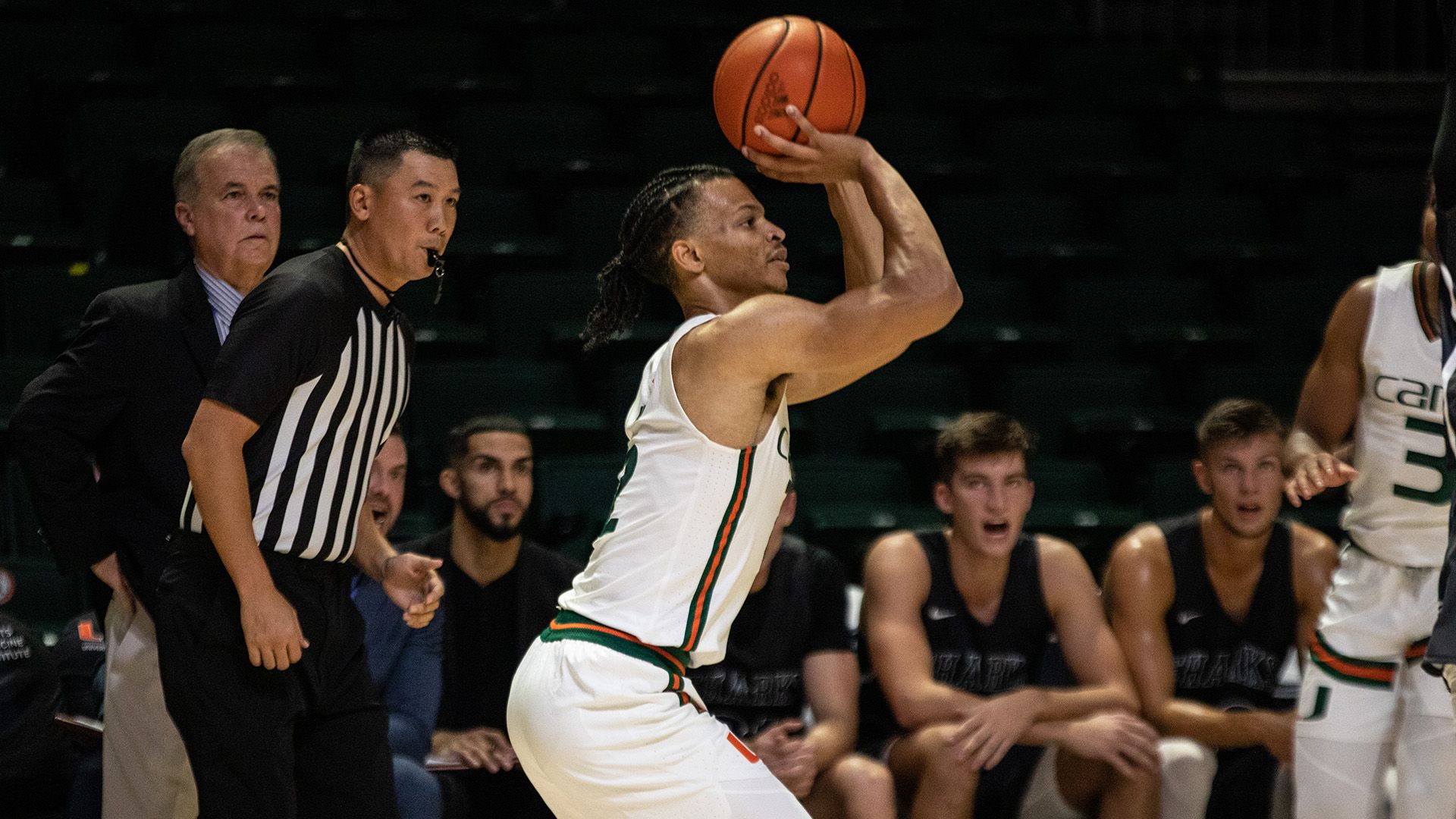 The Hurricanes’ starting backcourt of third-year sophomore guard Isaiah Wong and sixth-year redshirt senior guard Kameron McGusty and Charlie Moore combined for 87 points in the win, paced by a game-high 40 from Wong.

“That was exactly the kind of game I anticipated. I used the expression that the first team to 100 would win,” Miami head coach Jim Larrañaga said. “Jim Crutchfield does a fantastic job and his kids did a really great job. I want to thank Nova Southeastern for the great competition that was out there. We have some guys who can score the ball, but we realize we have to defend and rebound a whole lot better.”

From there, the Hurricanes continued their offensive onslaught to extend their lead as high as 22 in the first half. The Sharks, however, went on an 18-4 run to pull within eight during the final minute of the frame. After Miami answered with back-to-back buckets to close the session, it took a 45-33 edge into the locker room.

McGusty, who scored 14 points on 5-of-5 shooting in the first 12 minutes of the game, led all scorers with 18 points at the break, adding five rebounds and three assists. Moore totaled 13 first-half points for the Hurricanes, who shot 50.0 percent in the opening 20 minutes, while limiting Nova Southeastern to a 31.3 percent mark.

Wong’s 40 points set a would-be career high, as he finished with 10 more than he has in any regular season contest as a collegian. The Preseason First Team All-ACC honoree, who grabbed seven rebounds and a co-game-best three steals, shot 11-of-19 from the floor, 8-of-14 from 3-point range and 10-of-10 from the line. His eight made 3-pointers doubled his top mark in any regular season game.

“Isaiah Wong is a high-octane scorer. He can put the ball in the basket. He can make some incredible layups, [as well as hit] threes and free throws. And his teammates got him the ball. You’ve got to give a lot of credit to Charlie, Kam and his teammates for finding him in the open court and giving him a chance to go to the rim.”

Moore, in his first action as a Hurricane, totaled 25 points, six rebounds and five assists. He went 4-of-6 from deep and 9-of-10 at the line.

McGusty finished with 22 points, shooting 7-of-14 overall, 2-of-4 beyond the mark and 6-of-7 at the line. The Katy, Texas, native added a team-best eight rebounds and a co-game-high eight assists, the latter mark setting a would-be career best.

Meanwhile, for the Sharks, Junior guard/forward Sekou Sylla registered 26 points and a game-best 14 rebounds. He had a double-double in the first half alone, recording 10 points and 11 rebounds before the intermission.

The Hurricanes, who shot 16-of-32 in both halves, logged a 27-of-31 (87.1 percent) mark from the stripe. They also compiled 11 blocks on the night, including four from fourth-year junior guard Jordan Miller in his first game at Miami. Wong tallied three, as did sixth-year redshirt senior forward Sam Waardenburg, who made his return to the court after missing the 2020-21 season due to injury.

After nearly three weeks off, the Hurricanes will open the 2021-22 regular season Nov. 9 at 7:30 p.m. with a home contest against Canisius.