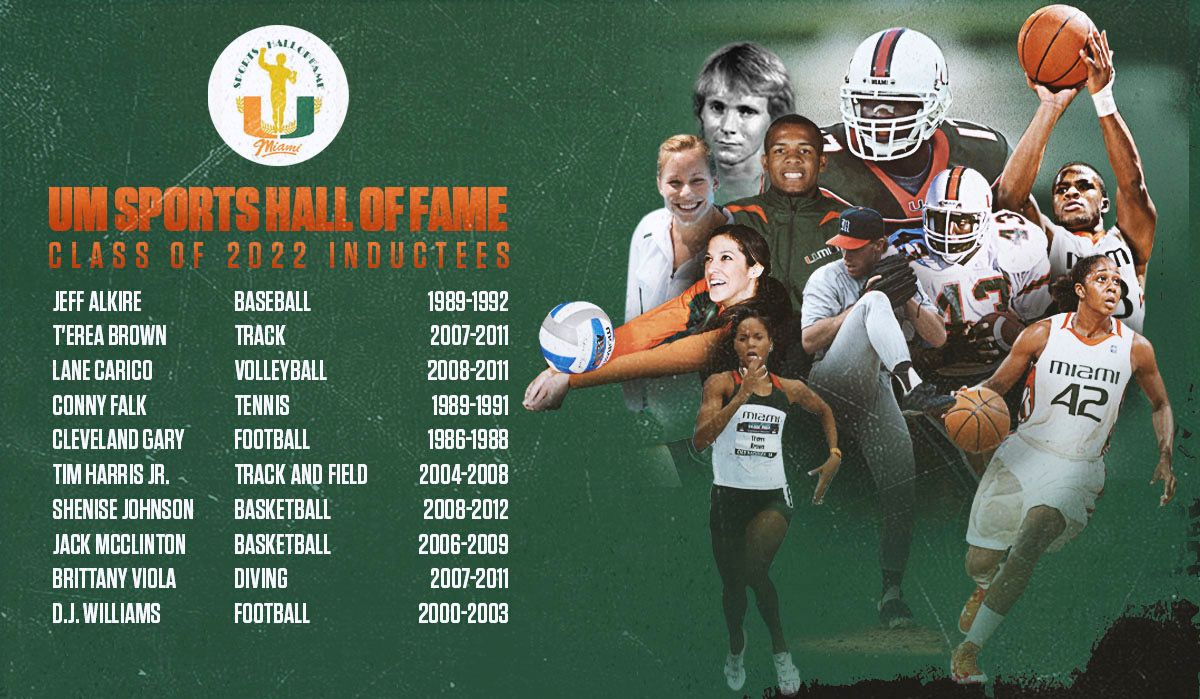 “We are honored to induct this outstanding class of athletes into the University of Miami Sports Hall of Fame,” said UMSHoF President Mead McCabe.  “We will celebrate these athletes and their amazing accomplishments at our Induction Banquet in the Spring of 2022, and we invite all Canes Fans to join us in welcoming the Class of 2022.”

This Class of 2022 will be formally introduced during an on-field ceremony at the end of the first quarter of the Georgia Tech – Miami football game on Saturday, November 6, 2021 at Hard Rock Stadium, as part of the “Hall of Fame Game” ceremonies.

The University of Miami Sports Hall of Fame is a non-profit organization founded in 1966 by eight Dade County Circuit Court judges, all University of Miami alumni. The UMSHoF honors those student-athletes, coaches and administrators who excelled at their sport and brought acclaim to the University through their athletic achievements while at UM. With the addition of the Class of 2022, the UMSHoF has inducted only 344 honorees during its 55-year history.

A consensus All-American in 1992 as he led UMSHoF member Coach Ron Fraser’s team to the College World Series, Alkire went 14-3 with a 2.62 Earned Run Average (ERA) and was named to the First Team All-American by the American Baseball Coaches Association/Rawlings, Baseball America, Collegiate Baseball and the Sporting News.  He finished his four-year career with 32 wins, 9th most in school history against only 6 defeats with a career 2.56 ERA.  Alkire also played for Coach Fraser on Team USA at the 1992 Barcelona Olympics.

A six-time All American, Brown won the 2011 NCAA National Championship in the 400-meter Hurdles and finished as the national runner-up in the event three times before winning the title as a senior.  She still holds the school record in the event.  Brown was named the South Region Track Performer of the Year by the US Track and Field and Cross-Country Coaches Association. She was also the 2010 USA National Champion in the 400-meter Hurdles and in 2009 she was the runner-up in both the 100-meter and 400-meter hurdles at the NCAA track and field meet.  Brown competed in the 2012 London Olympics and finished 6th in the 400-meter Hurdles, after winning the US Olympic Trials.

Carico is one of UM’s most decorated student-athletes.  She was named an honorable mention All-American twice, All-ACC four times and All-East Region First Team four times.  As a senior, she was named the ACC Volleyball Player of the Year, the ACC Volleyball Scholar Athlete of the Year, while being named to the AVCA All-American Second team and leading Miami to back-to-back NCAA tournament appearances.  She left UM as the school leader in Kills and Points, records she still holds, as well as 2nd in digs fourth in service aces.  Carico was the first player in school history to amass 1,000 Kills and 1,000 Digs in a career.

One of the greatest stories in Hurricane history, Falk came to Miami from Sweden in 1988 on vacation to visit his friend and fellow countryman, tennis player Johan Donar and he left as one of the greatest tennis players in UM history. UMSHoF member Coach John Hammill had a scholarship open when another student-athlete decided not to attend.  Johan encouraged Falk to join him and Conny would go one to become a three-time All-American and in 1991 he was named the Canes first ever, male or female, #1 ranked player in the country.  He left Miami with 105 career victories, second most in school history.

A hard-nosed running back, Gary transferred from Georgia to Miami in his sophomore year after being named the best running back in the SEC as a true freshman. He continued his superior play at Miami and was named First Team All-American by The Football News in 1988 as a senior when he led the Canes offense in receptions (57 catches) and rushing yards (480) while ranking second in receiving (655 yards) and scoring (66 points).  His 57 receptions set a school record, which still stands, for the most ever in a single season by a UM running back.  A first round draft pick by the Los Angeles Rams (26th overall) in 1989, Gary played five years in the NFL.

One of the most dominating runners in a single event in Miami and the Atlantic Coast Conference’s (ACC) history, Harris was a four-time NCAA All-American at The U in the 800-meters  and a six-time ACC champion combining his Indoor and Outdoor victories in the event.  He is one of only two runners to win six titles in the 800-meters in ACC history.  Harris is still the school Indoor record holder in the 800-meters. Harris followed in his father’s footsteps in coaching and is currently the Co-Offensive Coordinator/Running Backs at UCF.

Through her four years as a Cane, Johnson flourished under the direction of UMSHoF member Coach Katie Meier, becoming the only player in program history to tally 2,000 career points and 1,000 career rebounds. She was a two-time Associated Press All-American and earned ACC Player of the Year status in 2011. She ranks first all-time in steals (401), second in rebounding (1,020), third in scoring (2,262) and fourth in assists (556).  Johnson took the Canes to back-to-back NCAA Tournaments and helped the program achieve its highest ranking (5th) in school history.  She currently works as an assistant coach for Coach Meier at The U.

McClinton left his name across the record books as he is 7th in school history with 1,702 points scored and holds the record for the most points scored and most field goals made in an NCAA Tournament game after putting up his career-best 38 points against St. Mary’s in 2006. Thanks to a career-high seven 3-pointer game against Virginia in 2008, McClinton also shares the spot for the third-most 3-pointers in a game.  McClinton still ranks ranked first in the history of the Atlantic Coast Conference (ACC) in 3-point percentage (44%), and second in free throw percentage (90%).  A shining player on and off the court in the ACC, McClinton made the All-ACC first team in back-to-back seasons in 2007-08 and 2008-09 and he also made the ACC All-Academic Team all three years he spent at The U.

A Two-Time National Champion in diving, having won the NCAA title in Platform diving in both 2008 and 2011.  Viola was a four-time All American, garnering the honors in platform three times (2007, 2008, and 2011) and the 1-meter board once (2008).  In 2007, she was named ACC Freshman Diver of the Year.  In her sophomore year, she swept the 2008 ACC Championships by winning titles on 1-meter, 3-meter and platform, then went on to win the 2008 NCAA Platform National Championship.  She battled through two foot injuries to return as a 5th-year senior in 2011 and claimed her second National Championship in Platform Diving.  That year, Viola also finished in First Place at the AT&T National Diving Championships and the USA Diving Winter National Championships.

The epitome of a “team player”, Williams started UM as a fullback but when the need arose, switched to linebacker for the 2001 season and was quiet, but productive, making 51 tackles (25 solo) and recovering a crucial fumble in the Rose Bowl in the National Championship game against Nebraska. In 2002, he was named second team All-Big East and a Butkus Award semi-finalist with 108 tackles.  He continued his consistent and steady play as a senior in 2003 and was named First Team All-Big East and Third Team All-American by the Associated Press.  Selected in the first round (17th overall) by the Denver Broncos, he spent 11 years in the NFL.