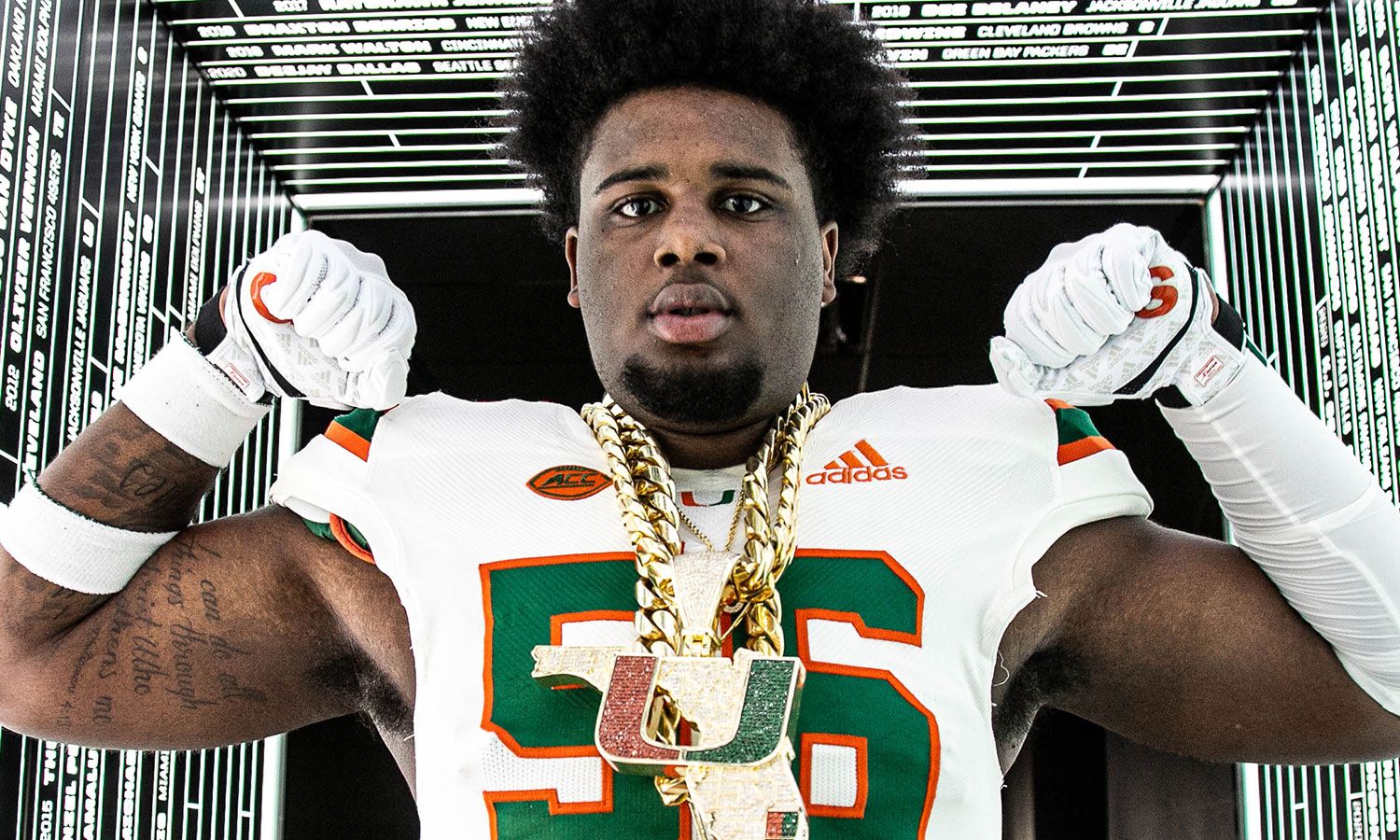 CORAL GABLES, Fla. – Chelita Smith was as excited as any mother would be.

She’d happily taken time off from work, settled into the bleachers and was ready to cheer her little boy on as he played in his very first football game.

That little boy, though, wasn’t nearly as happy – especially after he got knocked off his feet on a big play near the goal line.

After that, Leonard Taylor headed to the bench, angrily began taking off all the equipment on his 8-year-old body and told his coach he was done. Football, he said, was not for him.

From her vantage point, Smith wasn’t having it.

“I walked over and asked him what he was doing and he said ‘I quit. I’m not playing anymore’ and I said ‘Yes, you are. I’m not raising a quitter. You need to put all that back on and go back out there,’” Smith recalled. “And then I said ‘If you don’t want to get hit, you’re supposed to hit them before they hit you.’”

Taylor has been hitting opponents ever since. Rather soundly.

Over the course of the next decade, Taylor grew into a force on football fields across South Florida. He shone in youth leagues and in high school, he became one of the nation’s top defensive line prospects.

Some of the biggest names in college football clamored to land him on their rosters.

But home – where Smith and his three brothers could easily watch him play – was home. 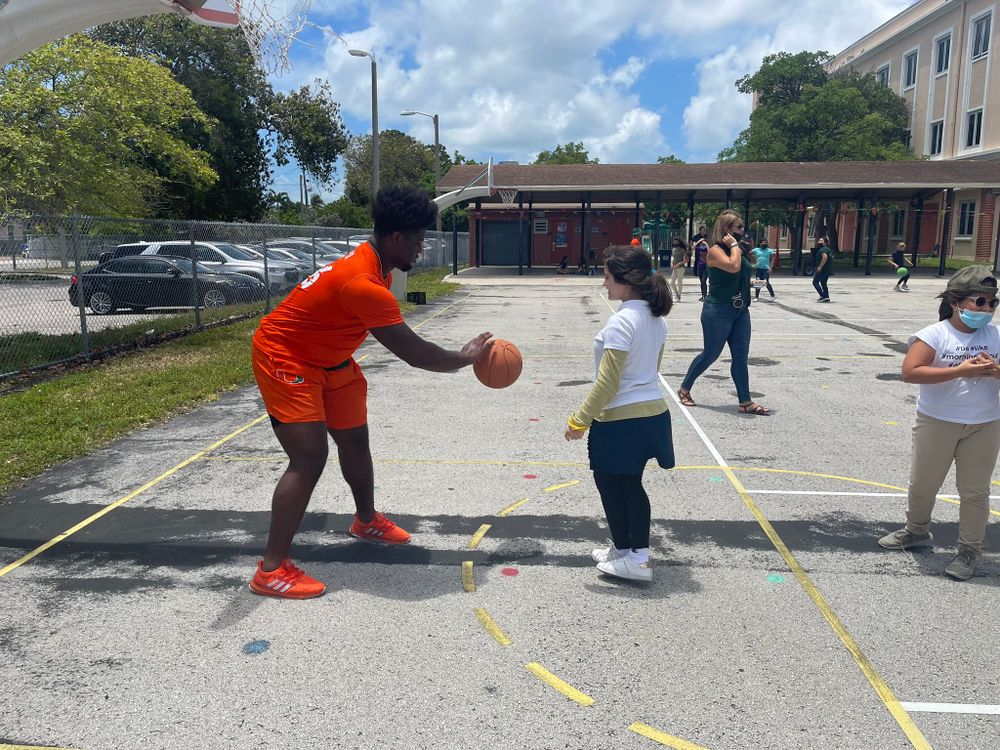 In December, Taylor signed with Miami. Earlier this summer, he arrived on campus. Now, the two-time high school All-American is ready to prove he belongs on the biggest stage and that all the recognition, all the accolades and all the expectations have been well earned.

“It’s not high school anymore. Everything is a different ball game now. You’re on your own with a lot of things,” Taylor said. “I really want to dominate, to show that I’m good and that the hype is real. I want to be that freshman All-American. I try not to focus on [the attention] too much. I just focus on getting better and perfecting my craft.”

There is plenty of material to work with as Taylor continues that process.

He has a mammoth 6-foot-3, 305-pound frame that Hurricanes head coach Manny Diaz says “is the model of what we want a Miami 4-3 defensive tackle to be.” He is athletic enough to backflip with the best of them and he’s quick and agile after years of playing basketball, the first sport he loved.

But Taylor understands that his impeccable high school resume – one that included him notching 51 tackles, 23 tackles for loss, five sacks, three forced fumbles, six defended passes, an interception and a blocked kick in seven games last fall – is behind him.

“The day we had to run 40 110-[sprints], that’s when I knew college was different,” Taylor said. “That kind of showed me how serious it was. You either do it or you don’t need to be here. You just push through and make your time or you’re going to be running them every Friday until you do.”

But as tough as the adjustment from high school to college may be, Smith is determined to press on, taking with him the lesson his mother imparted on him during that very first game.

His goal, he’ll tell you quite simply, is to make sure he earns his degree and Smith and his family are taken care of for years.

“My biggest motivation is my mom,” Taylor says. “I want to give her the dream she always wanted.”

And his new coach says if that determined mindset continues, Taylor has every opportunity to both add to Miami’s rich defensive line tradition and play at the next level.

“Historically, line play is the toughest place to jump in there and make an impact early. It’s just different people in there than what you’ve been going up against in high school,” Diaz said. “Leonard, like everybody else in our program, needs to learn to play with great effort, show great toughness and soak up everything [defensive line coach] Jess Simpson teaches him. If he does that, his natural talent will shine. It will come through and the player that we all expect to see will come out.

“Guys that are highly recruited, a lot of times, there can be sort of an added pressure or added expectations hanging over their head. It’s important for us [as coaches] that we don’t see recruiting rankings above a young man’s head. We see the player. Now our job is to develop them and their job is to fall in love with constant improvement. Every day, wherever you are, be a better version the next day. I think if LT does that, the sky’s the limit.” 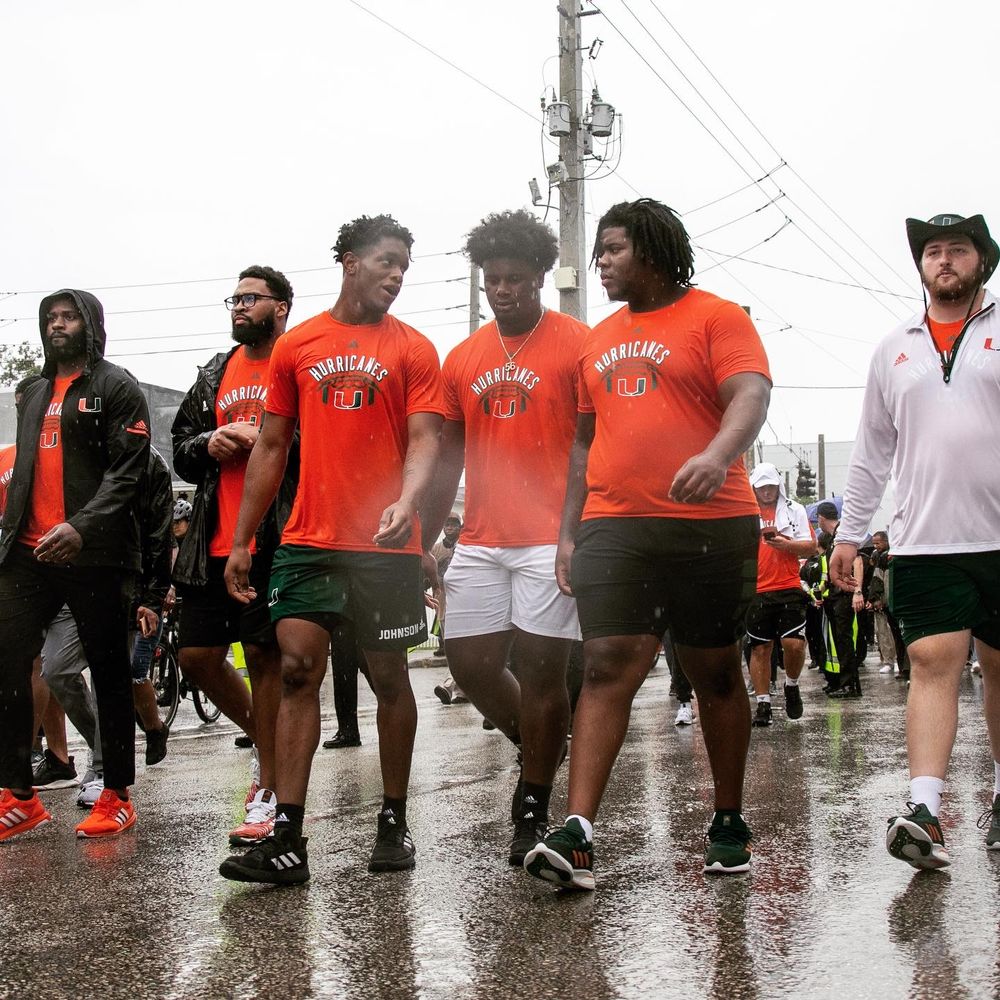 Smith, for her part, feels confident her son will continue to build on his success. More than once during his childhood, she’s seen him respond to challenges on and off the field. And his determination has always helped – even if sometimes, he’s needed a pep talk to get there.

For Taylor now, the opportunity to bring that determination and hard-hitting ability to his hometown program is extremely personal.

He wants to continue making his mother proud. He wants to set an example for his two younger brothers, 17-year-old Markail and 15-year-old Lamarcuse.

And he wants to continue to be the best he can be on and off the field for his community.

Like many of his teammates, Taylor has been a fixture at several community outreach events since arriving on campus. He’s laughed and played football with children in local afterschool programs and summer camps. And he was especially honored to walk beside his teammates, coaches, community activists and law enforcement officers during a peace march to raise awareness about the need to curb violence across South Florida.

All of that, he knows, is part of the responsibility that comes with being a Hurricane.

“It feels good to walk around with The U on my chest, to bring smiles to everyone’s faces, to let them know they’re not alone,” Taylor said. “Being with all the kids, it’s fun to play with them and seeing them run around and laugh and all that…and on the field, I want us to be able to come together as one to help win games and make the city of Miami know that we’re back again.”