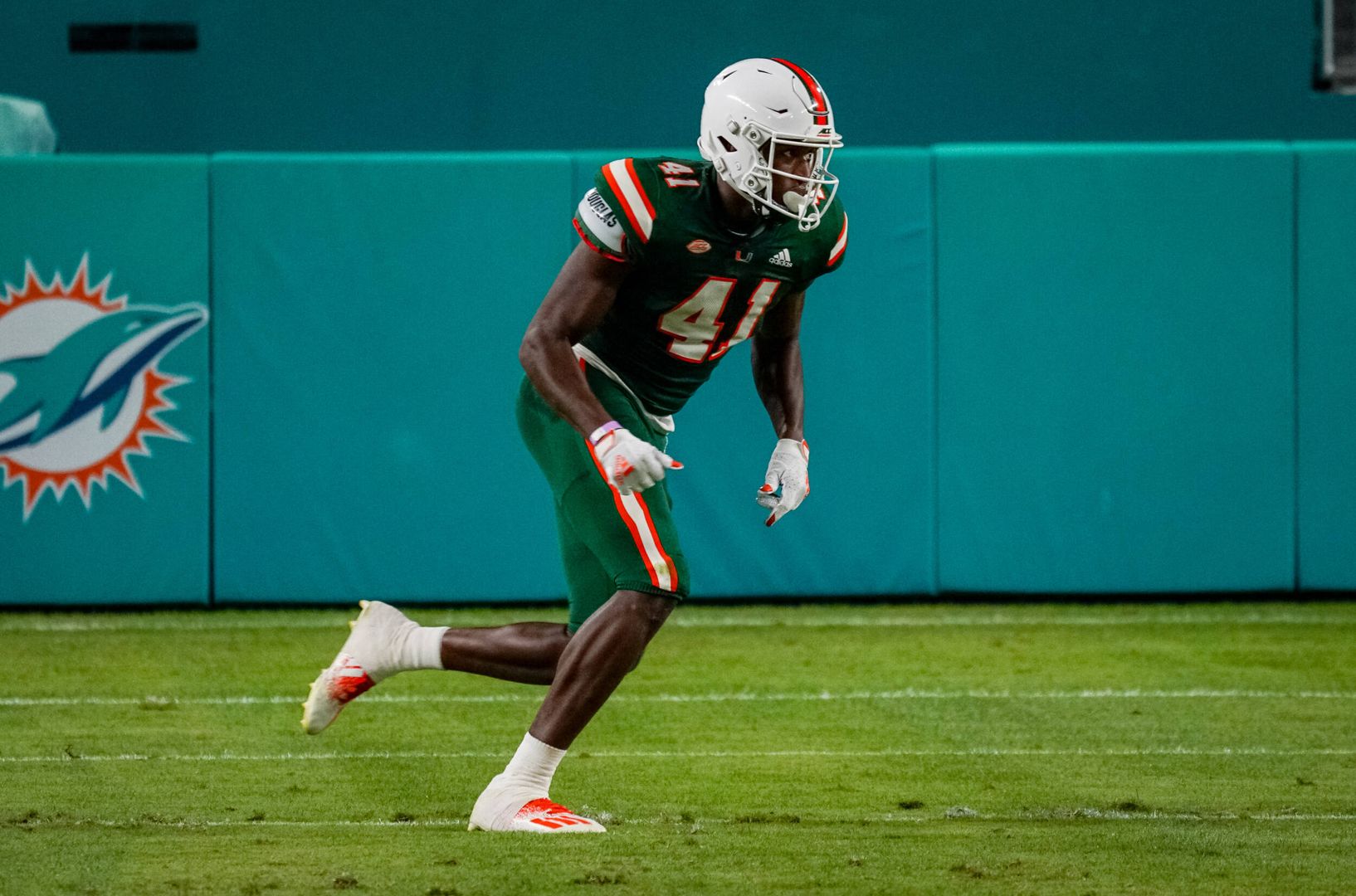 Destined to be a Hurricane

CORAL GABLES, Fla. – His father was an All-American tight end at Miami. His mother earned her nursing degree there. His grandmother worked at the University. And one of his three older brothers graduated from Miami just five years ago.

In ways big and small, Chase Smith was all but destined to one day be a Hurricane himself.

That destiny became a reality in January when he arrived on campus as a member of Miami’s highly touted 2021 recruiting class.

Six months later, the freshman is eager to continue blazing his own trail at the school that changed the lives of so many people he loves.

“I’ve been tied to this family at Miami since I was really young,” said Smith, whose father Willie Smith was a consensus All-American in 1985 and who in 1984 set a then-school record with 66 catches in a single season. “The majority of my family came to this school, not only came here, but got their degrees here. So it means a lot. And then you think about all the legendary guys that have come through here – Ed Reed, Ray Lewis, Sean Taylor. This is a legendary school. You don’t get much better than Miami, for sure.”

Smith, a former four-star prospect who played on both sides of the ball in high school, knows he shoulders the expectations that come with being a legacy football player.

That doesn’t seem to bother him at all.

In fact, he embraces that that responsibility, a responsibility that became very real the moment he put on his uniform for his first practice and was driven home even further when he walked through the tunnel at Hard Rock Stadium for two spring scrimmages.

“The first time I stepped into that locker room, it was just like ‘I really have to live up to and kind of exceed the name of Miami to make sure I have an impact here,’” Smith said. “There’s deep roots and deep ties to Miami that I have in my family. Being a part of it, growing up, watching Miami, living near here and having half my family live here, the culture just bombards you when you walk into that locker room. You get chills knowing you’re a part of it.” 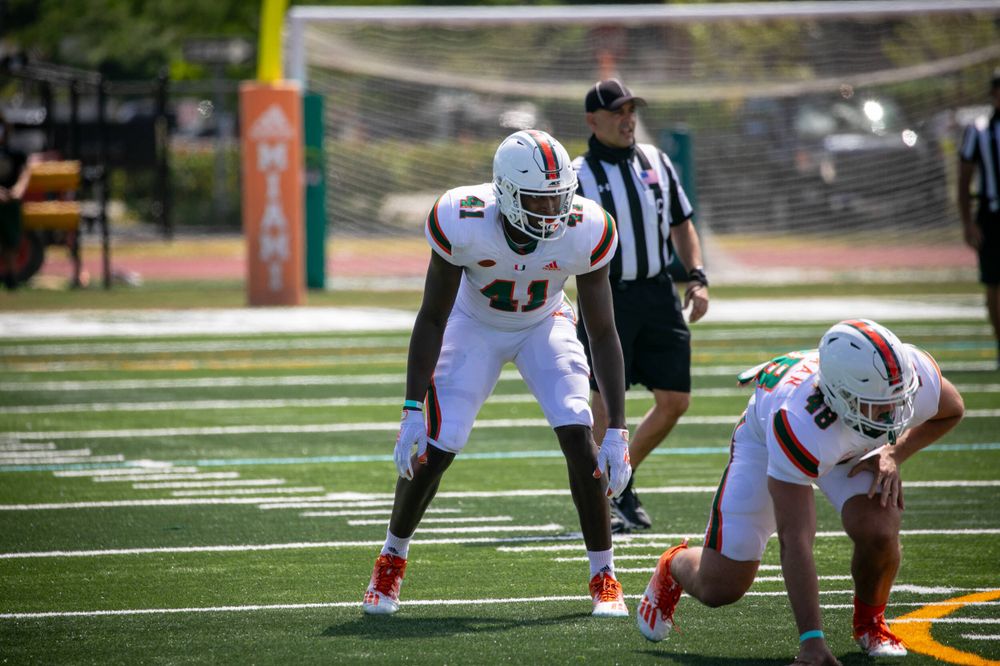 Smith expects the emotions will only intensify when the season begins in September.

To prepare for that moment, he has thrown himself into Miami’s offseason strength and conditioning program, adding 25 pounds of muscle to his 6-foot-2 frame.

In the spring, Smith – who played safety, linebacker and receiver in high school – eased into Miami’s striker role, one he feels is a perfect fit, given his versatility and skillset.

One of his veteran teammates couldn’t help but agree.

“He’s a tall, long, big striker,” said redshirt sophomore Gilbert Frierson of Smith earlier this year. “He’s coming along, learning the plays day by day and asking a lot of questions. He’s coming along very [well] and he’s going to be a very good player with time.”

Smith went on to notch a team-high seven tackles in Miami’s spring game. And the goal now, he says, is to continue learning and building on that early success.

His father is confident that will happen, given Smith’s competitive nature and drive to succeed.

Growing up, Smith played just about every sport he could, including soccer, basketball and football.

His active, rambunctious personality earned him the family nickname “Bamm-Bamm,” after the Flintstones character with the same name.

But as Smith got older and began harnessing his energy on the field, Willie Smith started to see an athlete with the potential to be the most successful football player in the family.

“I expect him to try to do better than I did and that’s what I’d like to see,” Willie Smith said of his youngest son. “He’s that type of person. He’s a very extremely motivated kid. When you see him play or watch him practice, you understand…Chase has all the qualities, plus, he’s the type that thinks he has to do better, he has to do more, every day. He’s different.”

For Smith, that high degree of motivation extends beyond the football field.

An aspiring engineer, he’s already begun the work of adjusting to college-level classes and like many of his fellow freshmen, learning how to better manage his time.

When he needs to unplug for a bit, he plays video games and he enjoys building and flying racing drones across Miami’s campus, a hobby that’s caught the attention of more than a few of his new teammates.

“At first, they were like ‘What the heck?’ and then I put the goggles on them and they were like ‘Oh my gosh!,’” Smith laughed. “It’s such an adrenaline rush, for sure, being able to do that.” 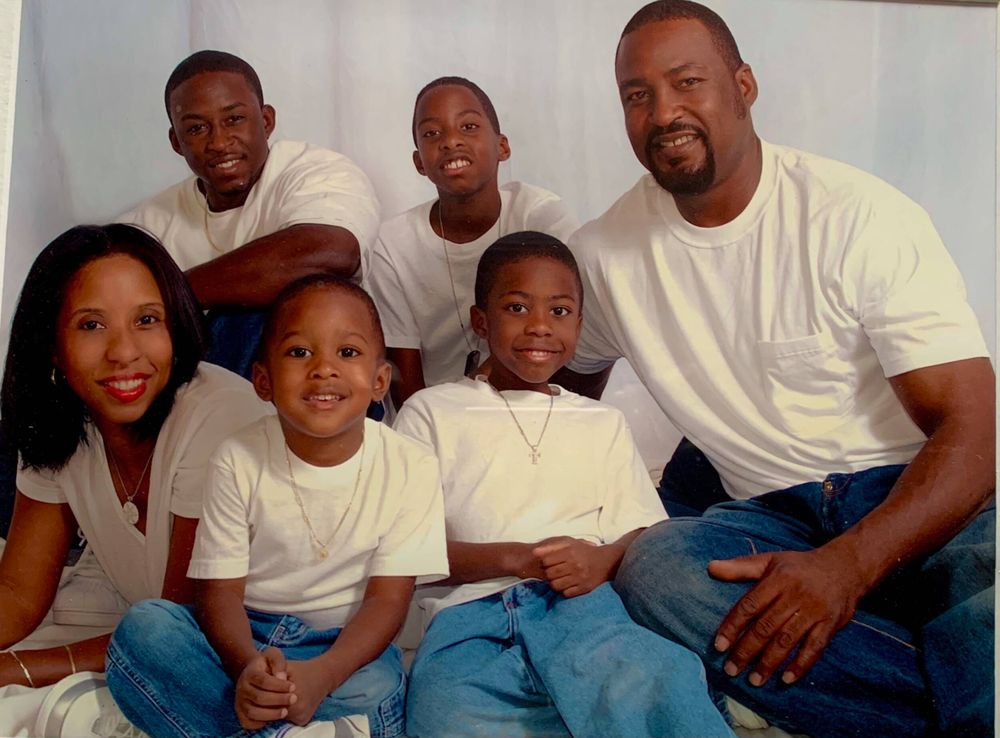 Chase Smith, with his parents Willie and Camille, and his brothers Sean, Eric-Dillan and Trey. (Photo courtesy the Smith Family)

He has been a regular at several of the Hurricanes’ community outreach events and, like fellow freshman James Williams, he was one of the first football players to deliver food and supplies to first responders and rescuers working at the site of the Surfside condominium collapse.

It was an experience Smith doesn’t expect he will forget any time soon.

“It was very emotional. You could tell it was getting to everyone,” Smith said. “It was also very humbling. We were all telling ourselves how much work there is to do, in the world in general. There’s always more work to do in our community, even no matter how big an impact you think you’ve already had.”

Smith intends to carry that mindset of doing more with him in everything he tackles, on and off the field as a Hurricane.

He believes that’s what his mother Camille, who died three years ago after a battle with leukemia, would expect from him.

He’s driven, too, to make the rest of his family proud and do his part to help make the Hurricanes a championship program once again.

It’s what he says the school and the South Florida community deserve.

“I definitely want a championship ring. I need a ring. And I think Miami is well overdue for one,” Smith said. “I just want to liven up this whole Miami, this whole community. We need, especially after a hard time like this, to bring joy back to the city. I want to be a part of that.”