For the University of Miami’s 20th-year head women’s tennis coach, it is time to guide her players into the most important event of the year.

Yaroshuk-Tews has been a part of the Miami program for nearly that entire stretch. She came to Coral Gables, Fla., as an assistant coach and eventually took over the reins in 2002. No one has more insight into what it has taken for the Hurricanes to hit a quarter-century than the coach herself.

“[We have had] a lot of great kids [who have] a lot of high expectations when they come into our program and [have shown] a lot of commitment on their end to get the job done that many years,” Yaroshuk-Tews shared. “Never having the adversity get in the way of the end result—because we’ve definitively suffered adversity over the years, but it just shows how resilient we are as a program. I have said that it’s not always about the NCAA tournament or the numbers, but to me it is about consistency because I think consistency just says a lot about a program. Consistency is where it’s really hard. It’s easy to do it one, two, three years.”

It is one thing to make the NCAA tournament, but it is another to succeed once there. Miami, largely under the guidance of Yaroshuk-Tews, has done both.

The Hurricanes’ 54 victories and 23 appearances in the Sweet 16 are both the ninth-most of any program, while their 12 Elite Eight berths rank eighth. Miami is also tied for 11th with three Final Four bids and tied for eighth with two national title bids. 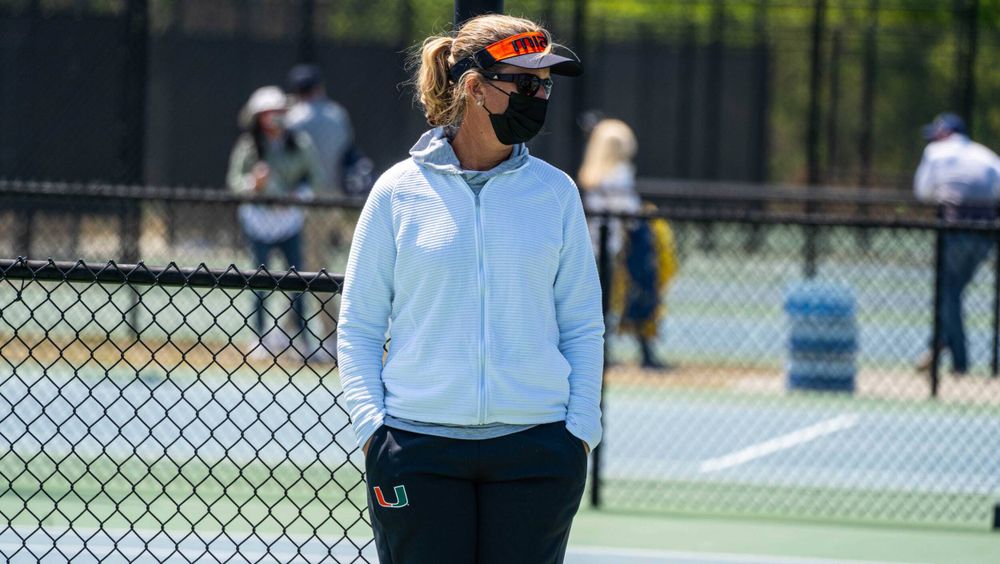 Under Yaroshuk-Tews, Miami has won a match in the NCAA tournament in all 18 of its appearances, logging 13 trips to the Sweet 16, eight to the Elite Eight and one to the national championship.

Simply put, not many individuals at any school can better explain what is necessary to advance in this tournament than Yaroshuk-Tews.

As the 2021 Hurricanes head into the NCAA tournament this weekend in Orlando, Fla., Yaroshuk-Tews also has another element she wants her team to focus on.

Understandably, players can get amped up to compete in the postseason, but Yaroshuk-Tews knows it is imperative to keep a level head.

“I think that the adrenaline starts rushing a little bit when you start talking postseason and you start talking [about the] NCAA tournament, but they just really need to follow the lead of just kind of having a meat-and-potato mentality,” the two-time ITA Southeast Region Coach of the Year said. “Whenever we have taken care of the process and taken care of ourselves at a high level and controlled the controllables, we’ve had some pretty darn good results. We’re just going to have to kind of turn down the volume a little bit in terms of the arena that we’re playing in and just play our game and do what we need to do. [If we do that], I think we’ll get what we want to get out of this.”

Miami is set to play No. 41 FIU, in a South Florida showdown, Friday at noon at the USTA National Campus to begin its NCAA tournament run.

While the Hurricanes now know their opponent, much of the team had to learn the selection process in the days leading up to Monday’s announcement. Five of Miami’s seven players are in their first full season of collegiate tennis and have never before played in the postseason.

Despite the youth, Yaroshuk-Tews likes a lot of the elements of her team, especially when it comes to the mental side of the sport. 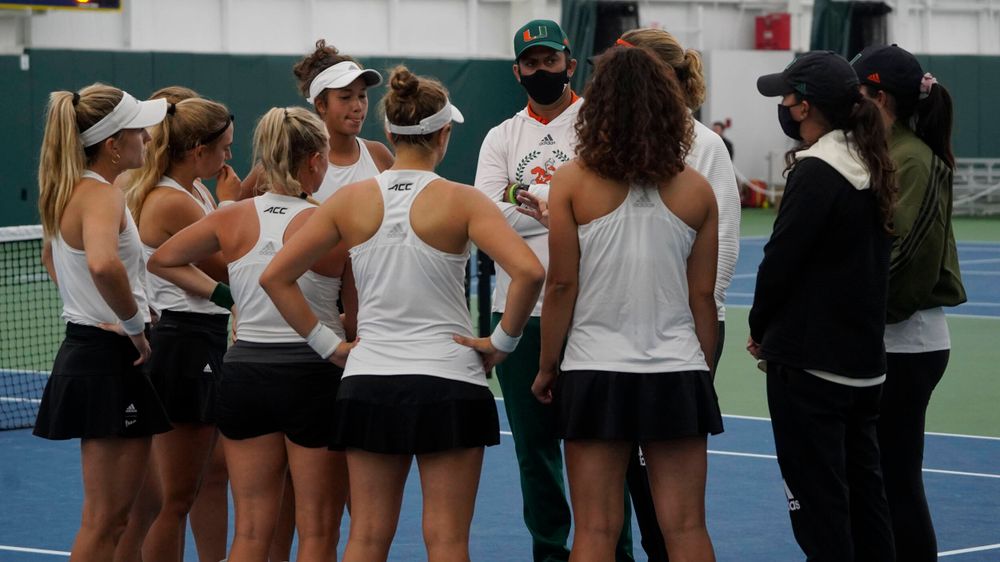 “Kids at Saturday’s practice tried to understand how it works,” she said. “They’re asking me like, ‘Wait, the draw comes out when? And then we leave when? And we could potentially play who?’ We’re talking through things and they’re just trying to understand what’s going on around them because it’s not a very straightforward process. It’s not like you’re going into a junior tournament and you’re the first seed so you’re obviously playing this seed.

As for the competition itself, Miami has its full attention set on FIU, which sports one of the best winning percentages in the nation. The Panthers are 12-1 (3-0 CUSA) on the season, did not lose until April 25 in their conference tournament title match and boast a top-100 singles player in No. 93 Marina Alcaide.

Miami has controlled the all-time series against FIU, posting a 25-1 record with 15 straight wins dating back to Yaroshuk-Tews’ first season at the helm in 2002. The Hurricanes are 4-0 versus the Panthers in NCAA action, including 1-0 at a neutral site.

All of that, however, is distant history, as the sides have not met since May 13, 2011, when Miami logged a 4-0 home win in the opening round of the NCAA Team Championship.

All of that also has no bearing whatsoever on this weekend’s match. The Hurricanes must be ready to face a quality opponent with a high level of motivation.

The victor of Friday’s match will play either homestanding UCF, both ranked and seeded ninth, or Charleston Southern. That contest would be Saturday at 5 p.m.

There is no question the Hurricanes are fully focused on FIU, but they are aware of the possibility of another matchup with the Knights. 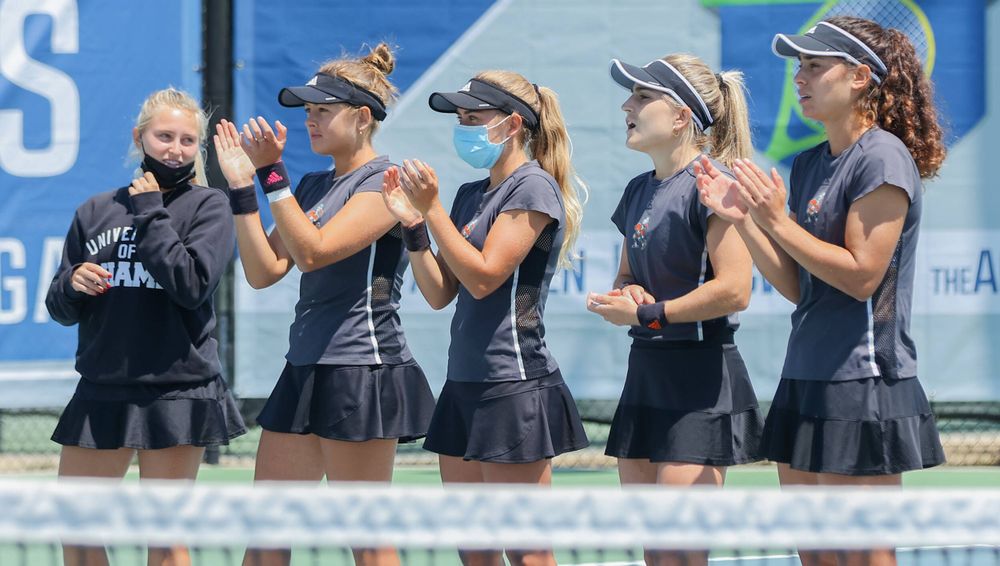 Five of Miami’s eight losses this season were by 4-3 margins to teams currently ranked in the top 15. One of the other three came nearly three months ago, on Feb. 13, when the Hurricanes dropped a 4-0 decision to UCF.

Despite that contest being so long ago—it was Miami’s fourth match of the season—and the teams changing so much since then, Yaroshuk-Tews does still have some takeaways from it that would be applicable if the teams meet again.

“I think the match matters actually, a lot, because we have film on them. We can definitely study film,” she said. “I think it’s a familiar team so it’s not like we would be going in blind, especially with such a young team that we have. Going in and knowing what to expect at some positions, there is a lot to be said for that. And listen, we lost 4-0, but had the match [been played out], I think it would’ve been 4-3. They’re a very good team; they’re a very talented team. They’re going to be playing on their home courts. We are a different team than we were [back when] we played them. So, let’s get by FIU and let’s see what happens.”

Miami heads into that matchup with FIU with two top-10 singles players in fifth-year senior Estela Perez-Somarriba and freshman Isabella Pfennig, who place first and No. 10, respectively. The former is the No. 2 seed in the NCAA Singles Championship, while the latter is a No. 9-16 seed.

The Hurricanes also have two top-25 doubles pairs, both of whom will compete in the NCAA Doubles Championship. Second-year freshmen Diana Khodan and Maya Tahan rank No. 15, while Perez-Somarriba and Pfennig form the nation’s No. 22 duo.

As was the case for the ACC Championship, though, Yaroshuk-Tews feels it is a player outside those four who could have a major impact on the team’s success in the NCAA tournament. That player is third-year sophomore Daevenia Achong.

“Daev has decided to step it up. And not just step it up from a tennis standpoint, but she’s stepped it up from an emotional standpoint,” Yaroshuk-Tews continued. “I explained to her before ACCs, when you’re playing in that three position, you can’t hide like [you can] down at number six. If Maya is kind of having an emotionally rough day [on the court], we might not even notice. But if Daev is having an emotionally rough day in the center of it all, it could have a real negative impact on all of us. So, I just think the spotlight stays on Daev. She’s turned the corner and we need her to stay there.” 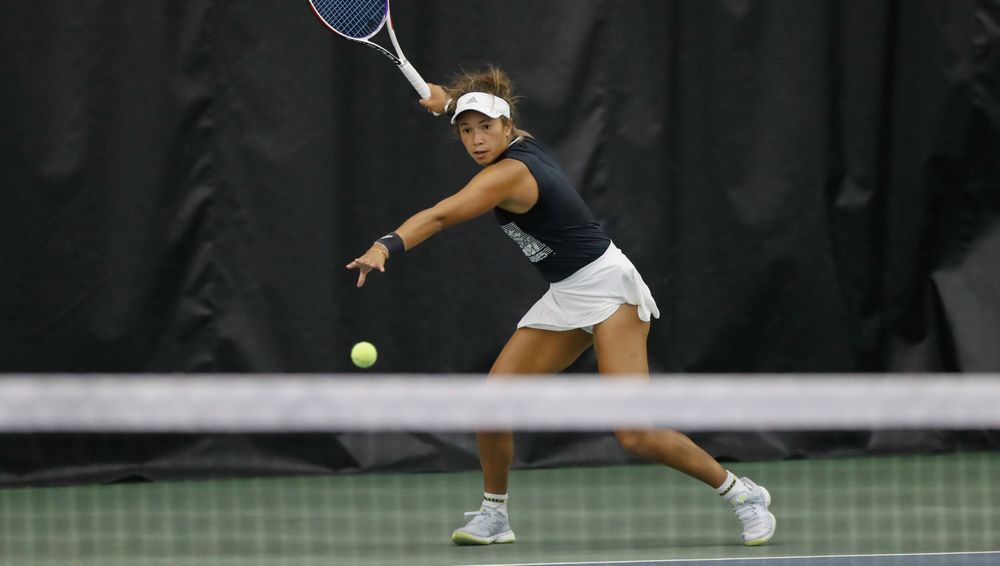 While Miami is counting on Achong, it will certainly take a complete team effort—from one through six in singles and one through three in doubles—to have the success it hopes for in the NCAA Team Championship.

If anyone can lead a team in that direction, it is certainly Yaroshuk-Tews. Few have done a better job of that than her.

Live video for opening weekend NCAA Team Championship matches will be available HERE, while live stats can be found HERE.