CORAL GABLES, Fla. — Squinting through the sun while rolling a skateboard back and forth underneath his feet, Brodie Scapens looked as carefree as ever as he sat under an umbrella on the University of Miami Lakeside Patio. On the opposite side of the concrete deck from where he spends most of his days, it wasn’t surprising to find him glancing up from his phone every so often to peer past the fence and bushes towards the pool.

Pausing his music and slipping out his earphones, his cheery “How you doing, love?” greeting delivered with the Australian intonation turned the heads of students sitting nearby. Maybe it was his accent that caught their attention, or maybe it was his impressive mullet.

The 21-year-old Adelaide native is now in his second year diving for Miami and almost ten years into his overall diving career. Five years ago, though, diving in the United States was the last thing on his mind.

“When I was 16, I wanted to be a tradee. My granddad was an electrician, my dad works for power lines, I guess it interested me.” Scapens said. “I got a couple of certifications for that and in the end I dropped it all because I could come over here.” 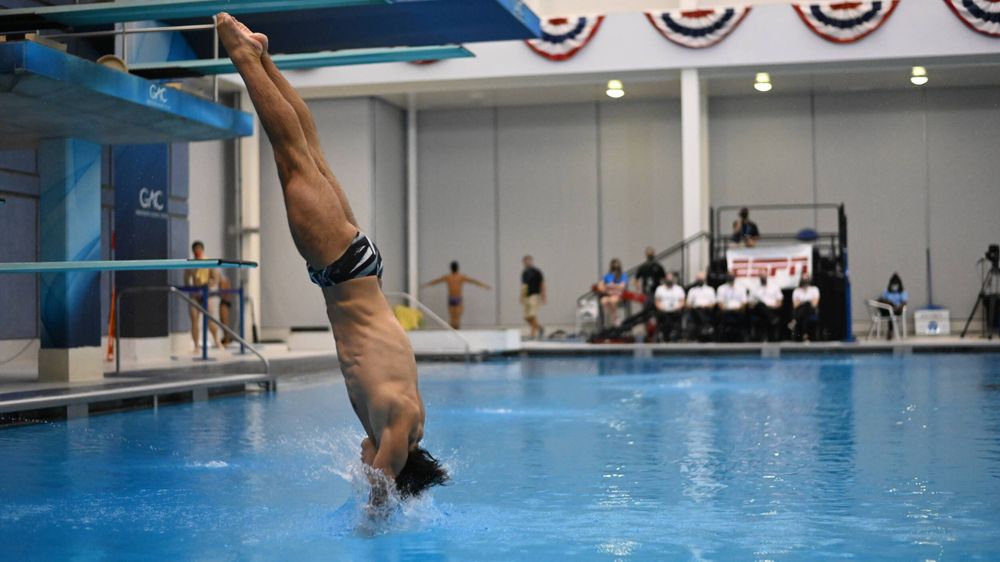 Doubling as a lead singer in a rock band (a fact disclosed by his 23-year-old sister Taylah) and with certifications in his back pocket, college just wasn’t on Scapens’ radar. He didn’t even know of Miami’s diving program history or the powerhouse title it had gained under the 32-year leadership of head coach Randy Ableman.

“I honestly had no idea Miami was like that. I just didn’t care about university, period,” he said.

Leaning back on his chair wearing flip-flops and an old Miami t-shirt, it’s no surprise that the genesis of his American diving career was a laid-back affair. An out-of-the-blue message from Olympic athlete David Dinsmore was the catalyst that brought Scapens to Miami.

Dinsmore was diving for Ableman at the time and had gotten wind of Scapens’ diving career with the South Australian Institute of Sport and Diving Australia. Interested in sharing the Miami pool and platform with the international diver, he gave Scapens Ableman’s number with the selling point of an open spot on the roster. Scapens gave his future coach a call and just like that, it all worked out.

“First time I met him on the phone he said to me, ‘I’m with my bird at the moment,’ and it was him and his wife, Karen.” Scapens reminisced. “He was trying to use Australian lingo. But I remember him asking me, ‘There’s only one thing you have to do. Your diving’s got the checks, but are you smart? Are you good in school?’”

“I guess I’m not dumb?” Scapens answered, another example of his lighthearted humor.

While their conversation might not have been what a recruit could expect, it gave Scapens an opportunity just the same.

The biggest thing I fear the most in life is losing the opportunities that I’ve been given, and there’s so many things that could just take it away so quickly.

The opportunity to move to Miami after that phone call came as fast as his diving career even began, and he has his mother to thank. Scapens was busy with Australian football, surf lifesaving and cricket growing up, but the particular activity of jumping off the jetty and doing flips was what didn’t sit well with his mom.

She encouraged him to sign up for lessons at the newly opened pool by their house.

“Maybe you should learn how to do it properly so you won’t hurt yourself,” she cracked at him.

It was only four months after the first lesson that he started training 27 hours a week, diving straight into the sport.

From Scapens’ first major competition at the 2014 World Juniors to the 2021 NCAA Division I Swimming and Diving Championships, the Scapens family has had his back the entire ride – even with the 14.5-hour time difference between Miami and Adelaide.

“Brodie doesn’t give out a lot of detail unless he has a little bit of prompting, but anytime there is a meet or competition we can stream or watch, we do,” explained Taylah. “I love watching Brodie compete, he puts so much time and effort into his diving and it is great seeing his training paying off. We are all very proud of him.”

Being away from home for two years, Scapens says Miami diving is the most welcoming team he’s been on. He also recalls coaches with which he had strong relationships back home, but Ableman has gone above that.

He’s a big teddy bear and like a father figure, I love him to bits. Randy is my American dad.

Scapens considers the people he’s with every day to be family now, but there was a point where he almost backed out of coming to Coral Gables to start his collegiate career here. Unsure about wanting to leave Australia, the support he got from his family was monumental, not to mention the care packages.

He lists some of the more coveted items he gets with a laugh while counting them on his fingers.

“My granddad loves throwing things in there,” he said. “He’ll throw in a couple of crocodile bottle openers, and he gave me some Australian dictionaries to hand out to people when they don’t know what I’m talking about.”

And there’s also the Vegemite, a famous Australian food spread. Scapens throws his head back after hearing the name.

“Oh I love it. I grew up on it, used to have it every morning. And Tim Tams. Those chocolate biscuit things? So good. The best. They’re in Canada, too,” he said. “Might be a commonwealth thing?”