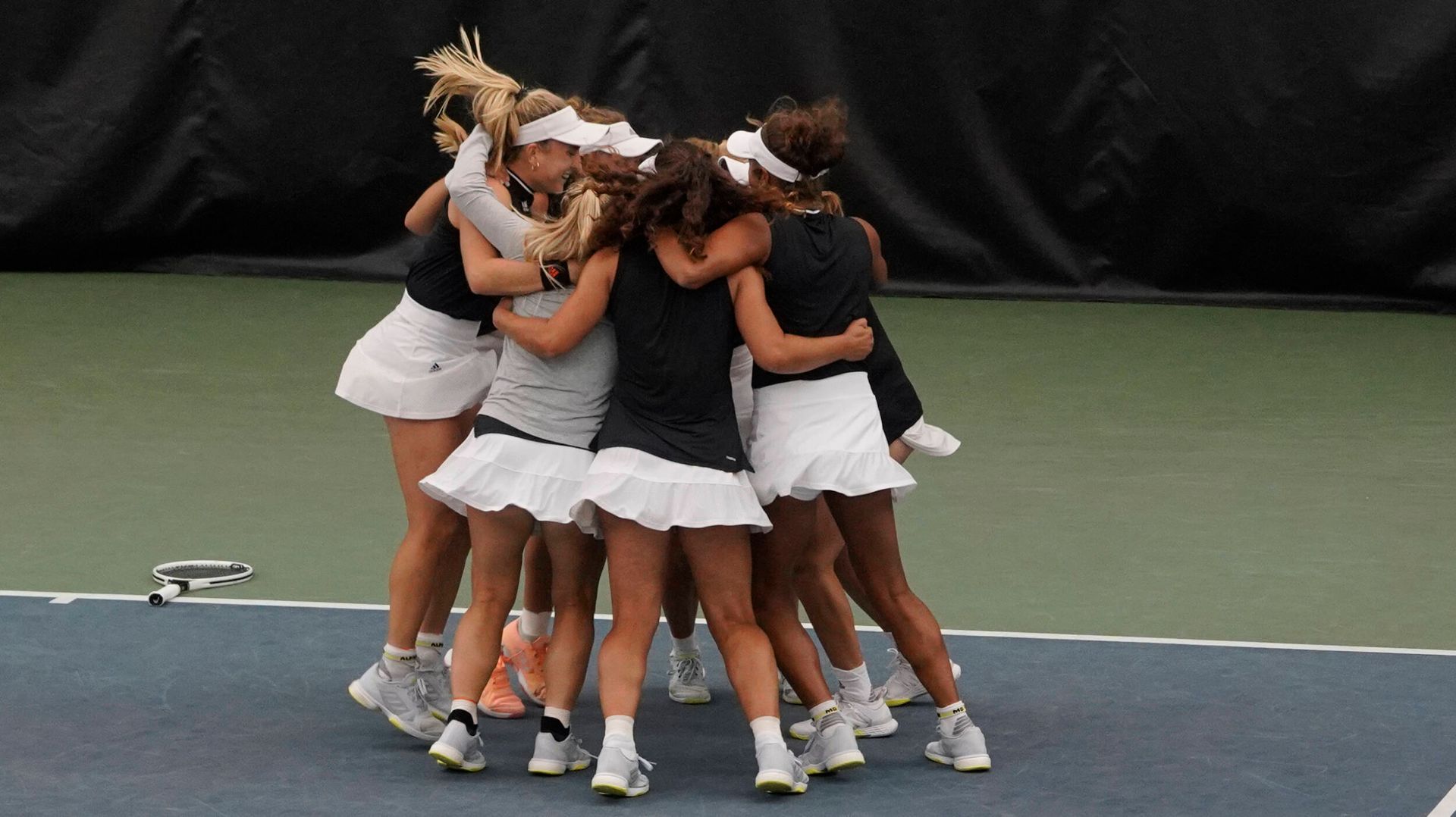 After weather moved the match from Rome, Ga., to Georgia Tech’s Ken Byers Tennis Complex and delayed the start by three hours, the seventh-seeded Hurricanes won the doubles point to take the early lead.

No. 24/20 Miami (14-7, 8-5 ACC) then won the top three singles matches to defeat the Seminoles, ranked No. 6/7, and earn a fifth consecutive spot in the conference semifinals.

“It’s a great day to be a Miami Hurricane,” Miami head coach Paige Yaroshuk-Tews said. “To take down FSU at the ACC tournament coming off the loss that we had to them a couple weeks ago, I think that just says it all. So happy to be the coach of this program today.”

Miami raced out to a strong start in doubles play, controlling the action on the first two courts, both of which featured top-25 matches.

Second-year freshmen Diana Khodan and Maya Tahan, ranked No. 24, earned their second top-10 win in as many days—and their third of the season—by storming past eighth-ranked Nandini Das and Andrea Garcia, 6-1.

Fifth-year senior Estela Perez-Somarriba and freshman Isabella Pfennig, ranked No. 25, clinched the opening point by posting a 6-3 triumph against No. 20 Victoria Allen and Emmanuelle Salas.

Although the Hurricanes claimed the 1-0 lead, the remaining match was played out, with the Florida State (16-5, 11-2 ACC) duo of Petra Hule and Giulia Pairone topping third-year sophomore Daevenia Achong and second-year freshman Florencia Urrutia, 6-4.

Needing just three singles matches to earn the win, Miami took four opening sets to grab hold of the match. The Seminoles, though, did register the first singles point, as Hule defeated Khodan, 6-2, 6-2.

Miami quickly went back on top behind an impressive showing from Achong, who stormed past Das in the first set and narrowly won the second to tally a 6-1, 6-4 victory.

The Hurricanes picked up their third point in a top-50 showdown, as No. 14 Pfennig topped No. 42 Salas in straight sets for the second time this season. The Gauting, Germany, native logged her fifth top-50 triumph of her young career by posting a 6-4, 6-2 result.

The decisive match came in a top-10 matchup on Court 1, where fourth-ranked Perez-Somarriba needed to rally back from dropping the opening set. The Madrid native did just that, taking 12 of the final 14 games, including each of the last four, to defeat No. 10 Pairone, 3-6, 6-1, 6-1, and send her team into celebration.

It marked the second straight ACC Championship in which Perez-Somarriba defeated a top-10 player in three sets to clinch a Miami upset over a top-10 team in the quarterfinals. In addition, it was her second victory of the year against Pairone and upped her career mark to 16-5 versus top-10 foes.

“What else can you say about this kid? Just a super stud. We all call her ‘champ’ and that’s exactly who she is and that’s exactly what she means to this program,” Yaroshuk-Tews said. “With that being said, [we were] up 5-3 on Court 6 and I think it’s nice to know, from her perspective, that she’s got an entire team behind her, playing with her. She’s our leader and she’ll continue to be our leader, but she’s got some soldiers following her and following in her footsteps, and they’re doing a great job. Unbelievable team effort today.”

The Hurricanes, 21-14 all-time in ACC Championship play, have now reached the semifinals in 12 of their 16 appearances since joining the league. Friday marked the fourth time they have defeated a top-two seed, including the first since 2013, when they won the title.

In addition, Miami moved to 36-9 all-time against the Seminoles, including 13-2 at neutral sites and 4-2 in ACC Championship competition.

“They listened really well. We have such great talent on this team and they’re playing together. They’re playing as a true team. They’ve come so far,” Yaroshuk-Tews said. “As coaches, we have some experience and it’s nice to see that they’re buying in and they’re listening. At some positions today, they just did exactly what we told them to do. We told them there would be some speed bumps along the way, but just to knock them down. They came up to them and they did exactly that and [when you do that] you come out with a ‘W.’”

Up next for the Hurricanes is an ACC semifinal contest against sixth-seeded and No. 16/17-ranked Georgia Tech, with action scheduled for Saturday at noon at the Rome Tennis Center at Berry College in Rome, Ga.