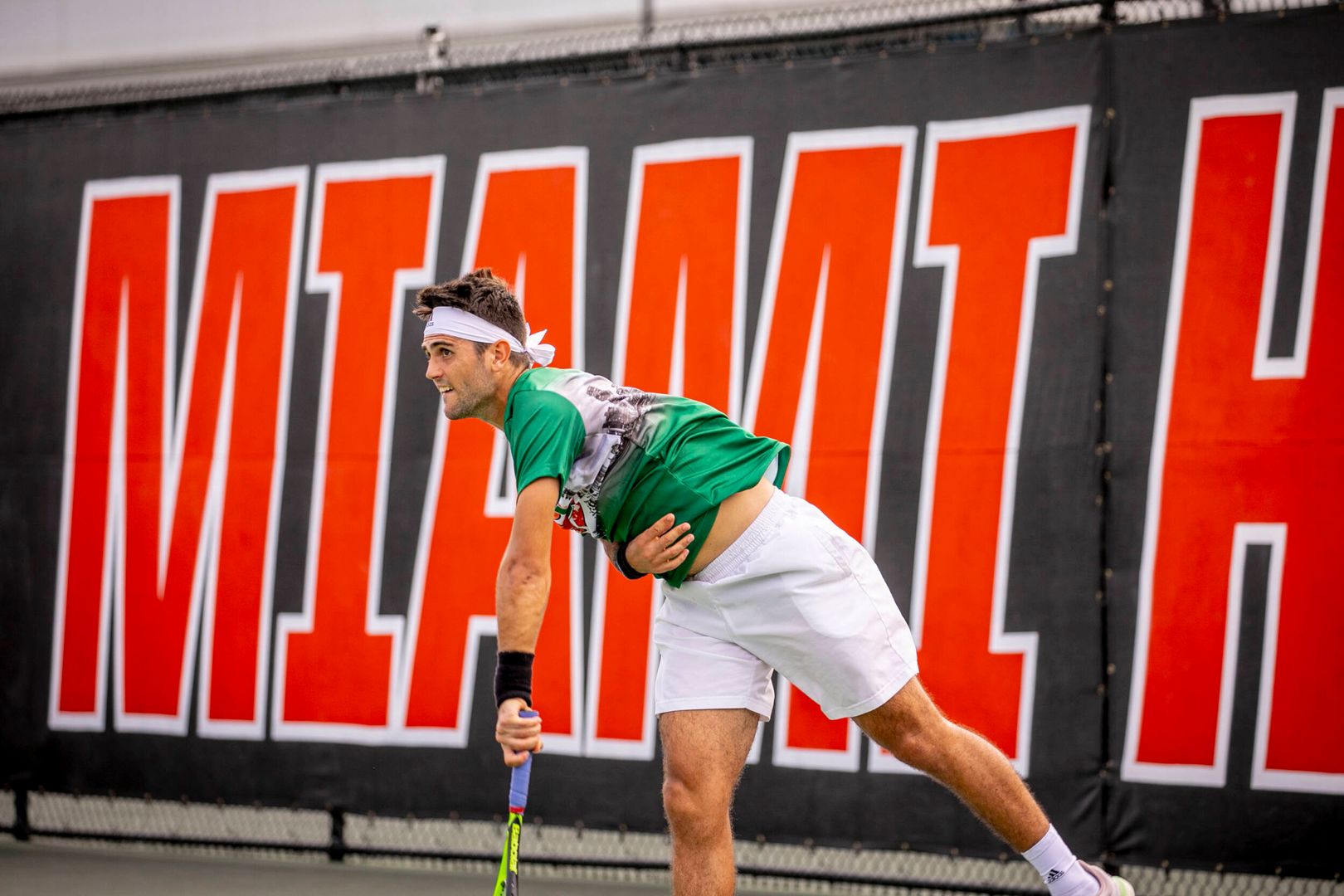 Taking it One Match at a Time

“As a team we have been moving in the right direction and we are excited to see what happens at ACCs,” assistant coach Darragh Glavin said. “It has been good to see the growth from the players, despite all the obstacles thrown their way, being able to overcome them and kind of keep our eyes on each match and not get ahead of ourselves. There has definitely been a lot of ups and downs, but we are excited about this week and the growth we have seen.”

After opening the season 3-2 with a pair of ACC wins over Georgia Tech and Clemson in February, the Hurricanes hit the road against three top-15 teams and fell to 3-7 ahead of a matchup with then-No. 29 South Florida at the Neil Schiff Tennis Center.

Racing out to a 4-1 lead in the 4-3 victory over the Bulls, the Hurricanes jumpstarted a four-match winning streak while also overcoming a 19-day layoff due to positive COVID-19 tests, subsequent quarantining and contact tracing within the program.

When reflecting on the season as a whole, senior Bojan Jankulovski said, “Losing sucks. But you learn from it. I believe we have learned a lot this season, especially earlier in the year when we had gone on a losing streak.

“So, just being able to overcome that and go on a streak and win a couple of matches in a row down the stretch definitely has been a confidence booster for the whole team,” Jankulovski continued. “And if I had to compare the team from February to now, I think we have grown so much as a team in a positive way. And in my opinion we have the potential to do so much more.”

Miami will have its chance on Thursday when they take on the Yellow Jackets for the second time this season, hoping to relive the success showcased in the original meeting between the two programs on Feb. 19.

In what was the first conference match of the season for both programs, the Hurricanes claimed the doubles point before senior Adria Soriano Barrera gave Miami a lead it would not look back on early in singles play, as the Hurricanes secured the 6-1 triumph.

But just over two months later into a year like any other without a typical fall slate, Miami understands the challenges it will face on Thursday against a Georgia Tech squad that capped the year 12-8 and 6-6 in conference play.

“I think it is easy to look at our previous match against them and say, ‘Oh look, we are going to win,’ but Georgia Tech, when they played us, that was probably one of their first outdoor matches and they have been on a hot streak since,” Glavin said. “So, we know they are dangerous and we have to come ready to give our all. They are now a top-30 team, so I don’t think anyone thinks it will be the same result. I believe it will be a very close match, one that we hope goes our way, but it is certainly going to be a tough match.

“We know they are a team who is going to probably want to come out and get some revenge so we are going to have to play our best tennis,” Glavin continued. “We are going to have to be ready. The preparation is no different than how it has been. It is just about keeping fresh and making sure everyone is ready to go.”

In the matchup, the Hurricanes boast the nation’s 27th-ranked doubles pair in Benjamin Hannestad and Franco Aubone, while Soriano Barrera sits at No. 51 in the singles rankings.

Taking it one match at a time, the Hurricanes are excited to get after it.

“I think with college tennis and the rules we have nowadays, every team is beatable and we have seen a lot more upsets,” Glavin said. “We have played very close with the top-10 teams we have played this year. Last week, we played UNC close, we also played Virginia close. And the guys now have seen those matchups and have seen how close we have been and believe that we can compete with every team in the country. So, we are just going to focus one match at a time, but we are excited. We know we have the talent to do it, but we can only focus on Georgia Tech right now and every match just have to give it our all. If we have all six guys collectively playing their hearts out and going after it, we know we can make a run. We are excited.”

Jankulovski added, “I don’t like to think too far ahead because in my experience, when you try and plan to far ahead, good things don’t tend to happen. So, we need to just focus one game at a time and give our best. We know we are a very talented team. If you look at it on paper, we have four players who have been top-50 in the individual rankings at some point in their careers, so we just have to put everything aside and just work hard to put it on the court. I don’t want to set any specific goal. We obviously want to go as far as possible, but need to just take it one game at a time and we shall see what is in store for us.”

The match, as well as all others—barring weather issues—in the ACC Championship, will take place at Rome Tennis Center at Berry College.

Live video, when available, for ACC Championship matches will be available HERE, while live stats for all contests can be found HERE.