Normally at this point, the Hurricanes would still have about a third of their schedule left, rather than under a quarter.

Miami, though, is playing its best tennis of the year. The Hurricanes are 6-2 in their last eight matches, with a pair of 4-3 setbacks against top-11 foes bookending a six-match winning streak.

“I truly feel like we’re in a pretty good spot right now. I feel that our kids are just kind of understanding what Miami tennis is truly all about,” Miami head coach Paige Yaroshuk-Tews said. “…We’re seeing them show a ton of improvement and a ton of maturity. I kind of feel like, right now, we’re kind of where we were after that Georgia Tech match last season, right [before the remaining matches got canceled], to be perfectly honest with you. I feel like we’ve turned a corner on a lot of levels. We still, obviously, have a long way to go, but we’re moving in the right direction.”

Yaroshuk-Tews, in her 20th season at the helm of the Miami program, has seen it all during her illustrious tenure.

The UM Sports Hall of Famer knows exactly what her team needs to do to hit the homestretch as strong as possible after coming around the bend.

While some might expect her to reference tweaks to technique or style, that is not the case. Rather, it a totally different part of the game. 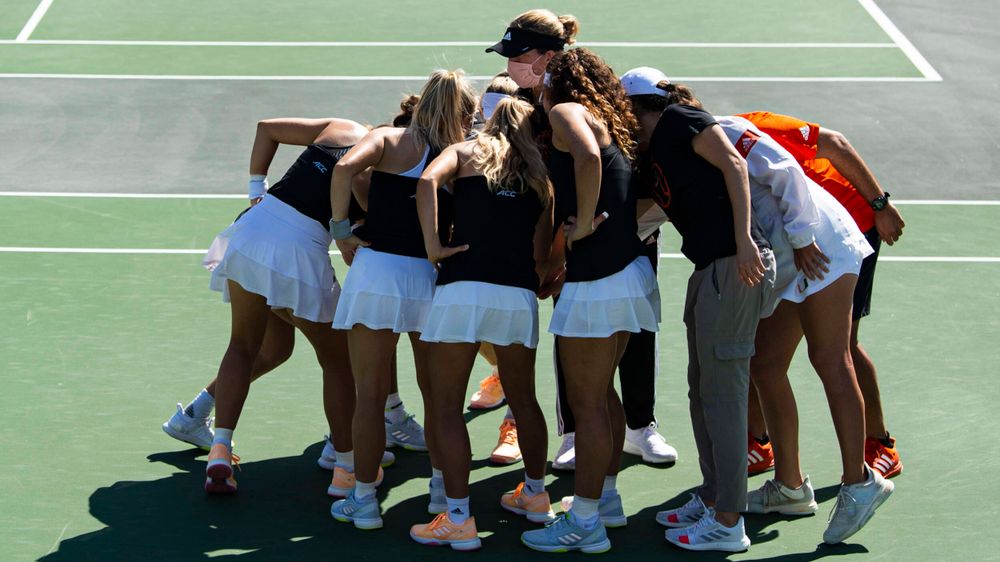 “I think now we’re working harder than we ever have worked; it’s a matter of doing it consistently. Like I told the kids Tuesday, it’s also a matter of having higher-level conversations,” Yaroshuk-Tews said. “I have really no patience for continuously talking about what you can’t do. If all we do all day is talk about what we can’t do, I can guarantee you we won’t be able to do it [when we take the court] on Friday. So, we have to have higher-level conversations and start focusing on what we are going to do, what we want to do and what we want to accomplish. It’s like the old saying goes, ‘If your head is in the past or head is in the future, it’s not in the present.’ So, a lot of the work that needs to be done to take the next step is truly between their ears.”

One area where No. 26 Miami (9-6, 6-4 ACC) does have consistency entering its last four matches of the season is in its doubles lineup.

The Hurricanes have used the same three pairs, in the same order, in each of the past seven matches. Six times in those seven affairs, they have come away with the doubles point.

Fifth-year senior Estela Perez-Somarriba and freshman Isabella Pfennig own a 5-3 record atop the lineup after previously going 2-0 together at the No. 2 spot earlier in the season.

Second-year freshmen Diana Khodan and Maya Tahan—coming off a 6-0, top-10 win in their last outing—are 6-4 at the No. 2 position, including 3-3 over the last seven matches.

Third-year sophomore Daevenia Achong, who played in the 2019 NCAA Doubles Championship, and second-year freshman Florencia Urrutia round out the lineup at the No. 3 spot, where they sport a 5-2 ledger.

“These teams have really kind of fallen into place with their personalities and with their playing styles. You don’t get that all the time and we’ve gotten that with these three teams,” Yaroshuk-Tews shared. “Their personalities and their playing styles are just a match. It’s definitely nice to be able to have a little bit more time to be able to work on … the X’s and O’s, to work on them looking at each other as one. You’re not two individuals out there, you’re actually a unit.

In addition, Yaroshuk-Tews has made few tweaks to her singles lineup of late. Perez-Somarriba, Pfennig, Achong and Urrutia have held the 1-2-3-4 spots, respectively, in each of the last six matches.

Beyond that, Tahan has played at No. 5 in six of the past seven outings, with Khodan at No. 6 in five of the last seven.

Although she is at the bottom of the lineup, it is actually Khodan who has made quite an impression on her head coach of late. 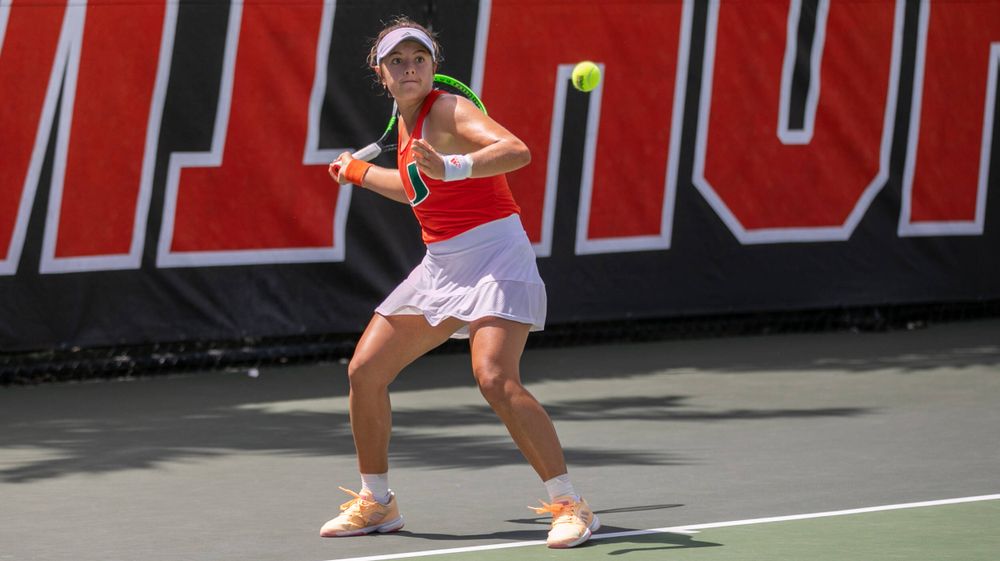 “Honestly, I told Di after our last match that it was no disrespect to anybody else on the team, but I thought she was playing like the third-best player on our team against NC State,” Yaroshuk-Tews said. “I told her how proud I was of her. That’s not to take anything away from anybody else. The way I see it, our three through six [positions] are … completely interchangeable. The way college tennis works, you can’t change them too many spots, but listen, three, four, five and six are all very close. The lineup is what it is and it’s pretty much working so far. So, I’m not going to be changing it.”

Another player who has made her mark not only on Yaroshuk-Tews, but on the ACC and the nation as a whole is Pfennig.

After starting the spring unranked on both the newcomer and singles lists, Pfennig is now No. 17 in the country, good for second-best among freshmen. She is also the three-time reigning ACC Freshman of the Week and owns four such awards in total.

A native of Gauting, Germany, who arrived at Miami to begin her college career in early January, Pfennig has quickly become one of the top players in college tennis.

The young standout is 12-2 on the season, tied for the best record among Hurricanes, including 8-2 at the No. 2 position and 1-0 at the No. 3 spot. In addition, she is 5-2 versus ranked players with a trio of top-35 victories.

“I know she is an intelligent kid, but what I’ve been most surprised with is the level of her tennis IQ,” Yaroshuk-Tews said. “Her tennis IQ, [as well as] how she thinks and how she prepares is so beyond her years, from what I’ve seen from a coaching perspective. I ask questions to the team and she is always giving me the correct answer.

“She looks at me when I’m talking and I can tell that she’s looking me in the eyes and she’s buying in,” Yaroshuk-Tews added. “She’s answering questions and I’m looking at her like, ‘Shoot, you’re a freshman!’ Freshmen don’t talk like this, freshmen don’t have these answers. This is special. … She is so confident in herself as a human being that I don’t see anything getting in this kid’s way, I really don’t. She is so confident in herself that this level of confidence is what superstars are made out of.” 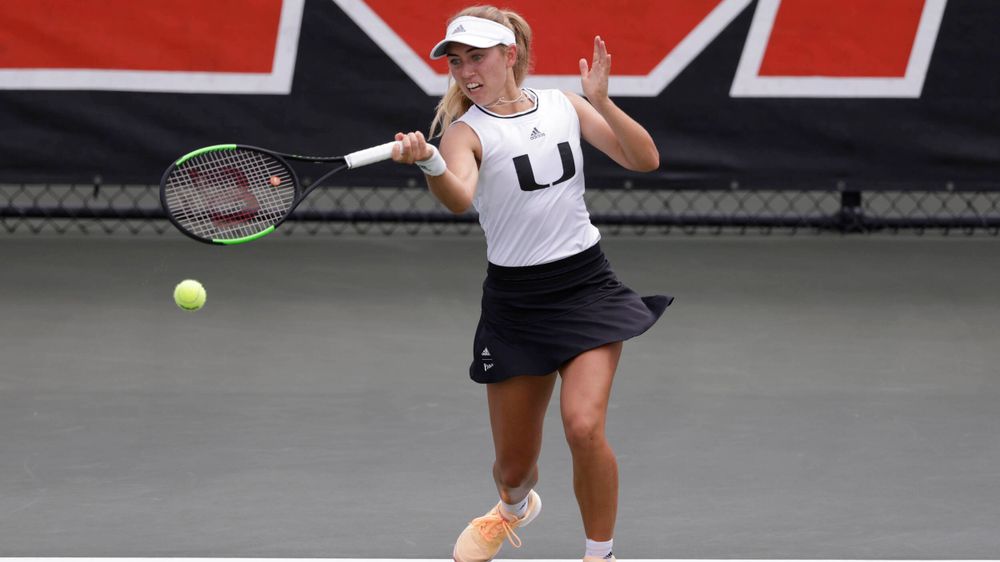 Although Pfennig has surged up the rankings of late, her team is actually coming off its first defeat in three weeks.

The Hurricanes now wrap up their seven-match homestand this weekend with two of their last three league matches. First, Friday at noon, Miami takes on Virginia Tech. Then, Sunday at 11 a.m., it plays eighth-ranked Virginia in its ACC home finale.

The Hokies, coming off a 5-2 home victory Saturday against William & Mary, head to Coral Gables at 5-12 (0-9 ACC) on the season. They do not have any ranked singles players, but Shene Disbergen and Rita Pinto form the nation’s No. 65 tandem in doubles.

Emma Navarro, the lone freshman ranked above Pfennig, comes in at sixth nationally in singles, followed by Natasha Subhash at No. 35 and Rosie Johanson at No. 101. In doubles, Subhash and Sofia Munera place No. 29, with Johanson and Navarro at No. 41. Vivian Glozman and Amber O’Dell round out the trio at No. 52 on the list.

The Hurricanes own an 18-6 record all-time versus the Cavaliers, including a 12-1 ledger in Coral Gables. The sides did not meet during the condensed 2020 campaign, but Miami logged a 6-1 home win on April 13, 2019, in the last matchup.

“I think that an important thing for us to do—just to start working on the next step—is treating our match on Friday no differently than we’re going to treat our match on Sunday,” Yaroshuk-Tews said. “[That is] in terms of our playing style. We all know that we need to start taking more chances, we need to be more aggressive and we need to go after our opponents a little more.

“We need to be making moves on Friday regardless of our opponent, just like we’re going to be making moves on Sunday,” she added. “Ultimately, that comes down to the coaching. We need to make sure that they’re doing it. We need to have the expectations high, regardless of the opponent. And then it comes down to these kids trusting us that we know what we’re doing. If they fail, you know what, I’ll take all of it. And if they succeed, they can take all of it and we’ll move forward. We’re excited to have another great opportunity in front of us.” 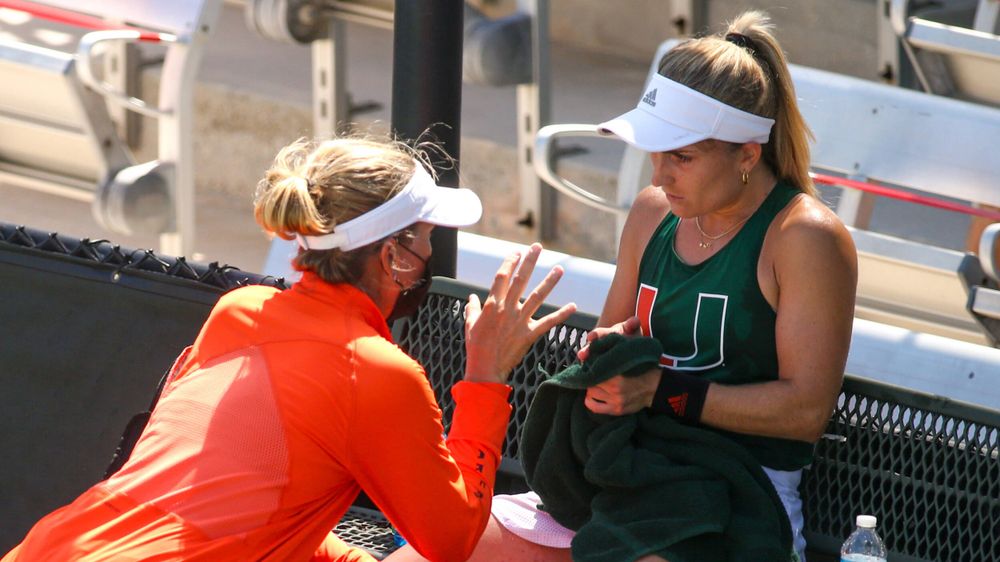 Miami goes into its matchups with the Old Dominion State schools boasting a pair of top-20 singles players and doubles duos. On the former list, Perez-Somarriba checks in at fourth in the country, while Pfennig is No. 17 overall.

In doubles, Perez-Somarriba and Pfennig hold the No. 19 position in the national rankings, while Khodan and Tahan are just one spot behind them at No. 20.

Live stats for Miami’s outing versus Virginia Tech can be found HERE, while live stats for its matchup with Virginia will be available HERE.