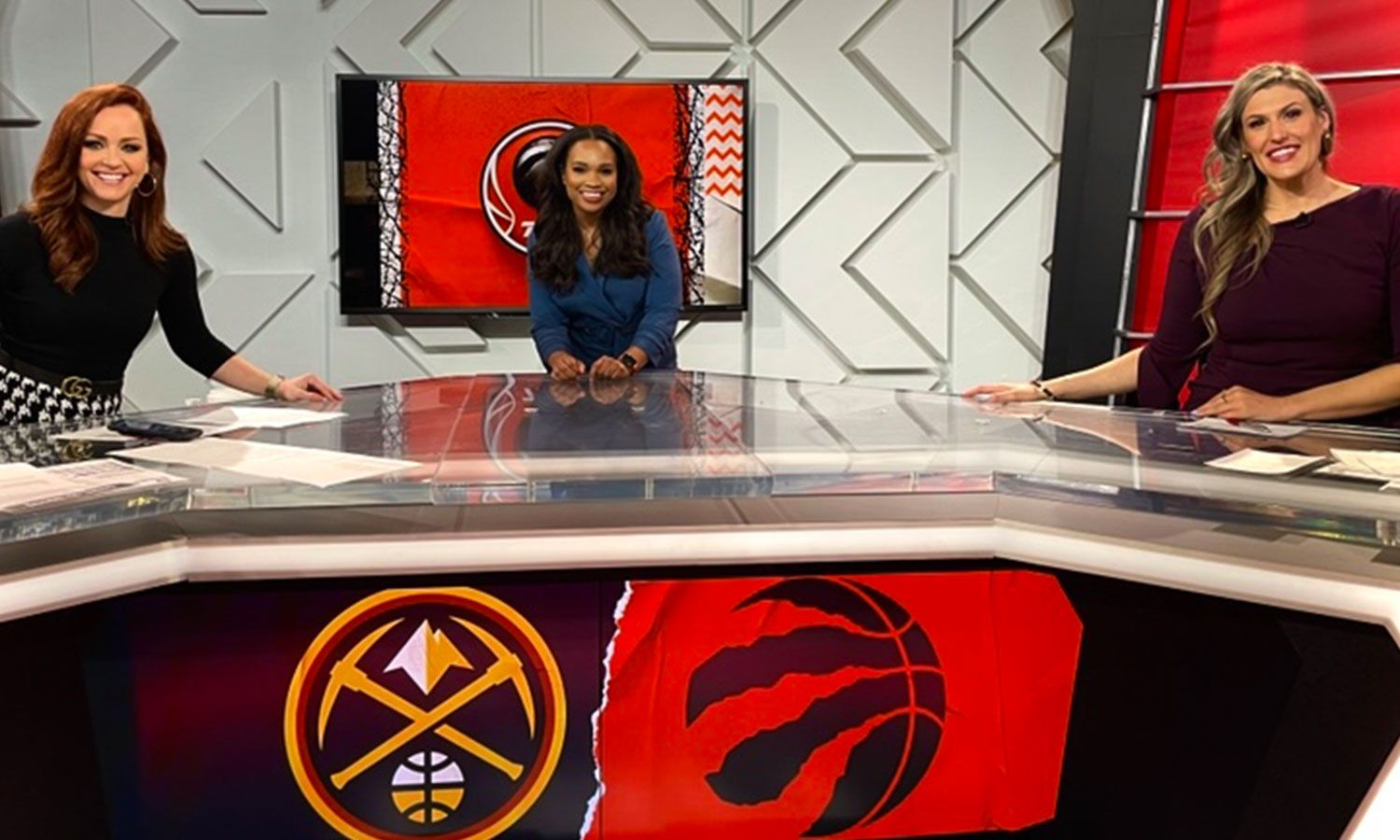 There was a point where Amy Audibert simply had to flip her phone over and push it away.

The constant stream of messages, alerts and notifications was becoming a distraction and in that moment, she knew she needed to focus on her work.

Turns out, though, it was that work that had set Audibert’s phone ablaze last Wednesday as dozens of family members, friends and colleagues reached out to congratulate her on a historic night.

Audibert, a former center and forward for the Hurricanes, was one of five women to fill every on-air role during the TSN Canadian broadcast of the Toronto Raptors’ 135-111 win over the Denver Nuggets on March 24.

Together with studio host Kate Beirness, sideline reporter and analyst Kayla Gray, color analyst Kia Nurse – a guard for the Phoenix Mercury – and Meghan McPeak, who handled play-by-play duties, Audibert was part of the first all-women broadcast in NBA history, something the former hoopster is still trying to process.

“We didn’t see stuff like this growing up. That’s what we’ve been saying to a lot of the young women and girls that saw it,” said Audibert, who served as an in-studio host for the broadcast. “This was huge because now they can look up and see something. We have this in-game [feature] called the Tangerine Fan Angle, where fans Tweet in pictures of them at home watching the game. It’s a fun little feature. Then they started throwing up the fan angles and it was all these little girls at home, watching the game. That whole ‘If you can see it, you can believe’ it was right in my face. We may have been talking about trying and hoping to ignite some passions in these young girls, but we hadn’t really seen their faces until that moment.

“It was such a cool moment because you realize they are out there and they are watching.” 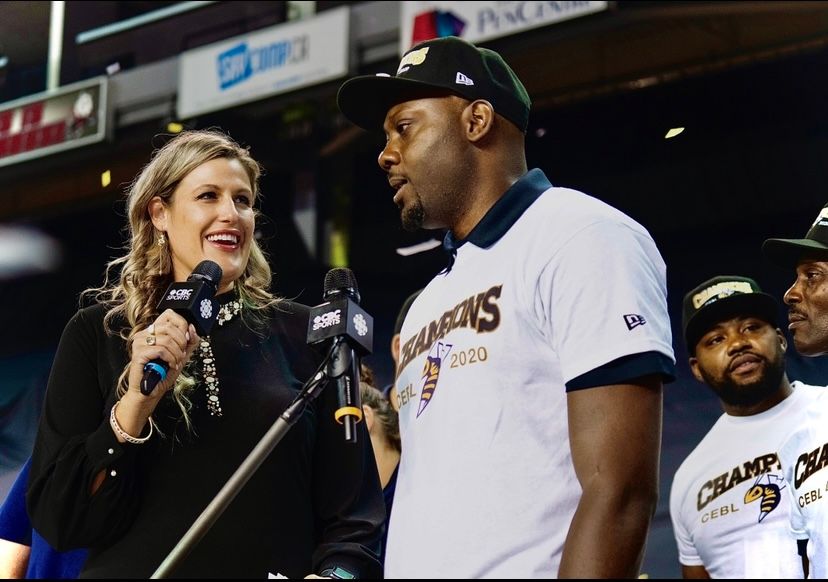 Young female NBA fans weren’t the only ones who took notice.

Canadian Prime Minister Justin Trudeau congratulated Audibert and the rest of the broadcast crew by name on Twitter. And Raptors star Kyle Lowry – the subject of plenty of speculation ahead of last week’s NBA trade deadline – credited each of the broadcasters by name during his highly-watched postgame news conference.

“It was really special because we thought there was a good chance we’d just called Kyle’s last game in Toronto and we’d spent time talking about how much he’d meant to the franchise and our careers and our love of the sport,” Audibert said. “And obviously, that’s what we need, right? People who continue, on these big platforms, to continue to say our names and show respect for what we can do.”

As memorable and headline-worthy as last week’s broadcast was, Audibert’s journey to that moment behind the desk hasn’t always been easy.

During her time at Miami, she didn’t really consider a career in broadcasting until others suggested it might be a good fit for her. And even after graduation, she wasn’t 100 percent certain that was her calling.

Instead, she focused on – and trained for – a potential professional career overseas. When a serious back injury forced her to give up the game she’d loved for so long, Audibert returned to her native Canada and tried to come to terms with her disappointment.

She worked as a bartender and spent an extraordinary amount of time with her grandmother, who she credits with helping her find a new perspective on what was a tough situation.

Eventually, she reached out to the administration at Niagara College’s Radio, Television and Film Program and interviewed to enter the program.

During her time there, Audibert tried to get in front of the camera as often as possible – a daunting task, given how few sports teams or college programs were available for her to cover on the Canadian side of the border. 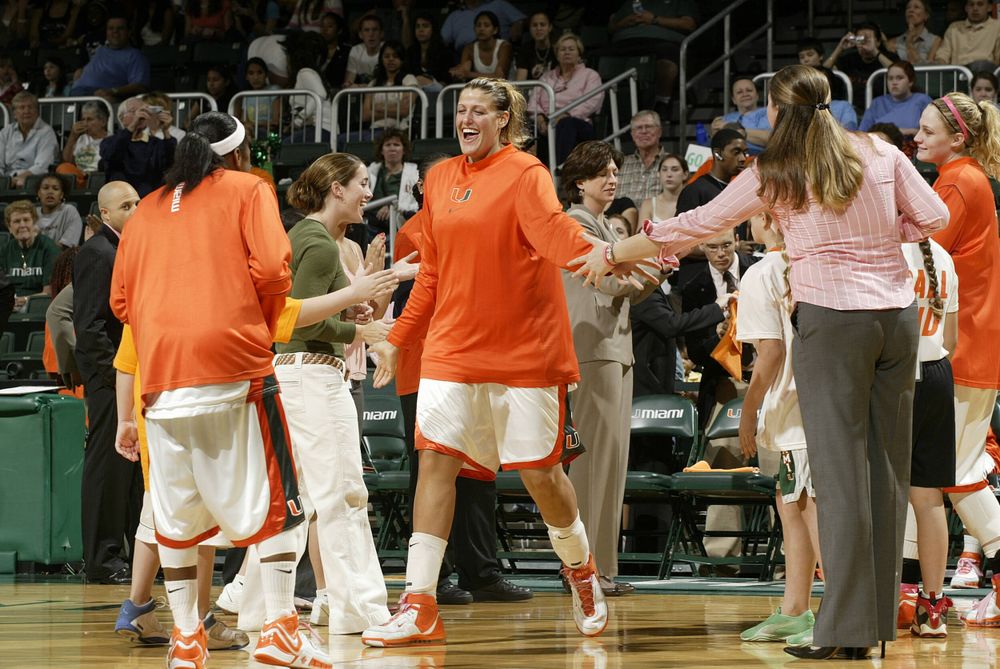 She began calling games for Canisius College in Buffalo, New York, which led to an opportunity as a sideline reporter for Time Warner Cable in Buffalo and that, eventually, led to another opportunity, this time as an analyst for the men’s and women’s basketball programs at the University of Buffalo, which, at the time, was expanding its online streaming services through ESPN3.

She also returned to Miami, where she did an internship with the Hurricanes that allowed her to do some on-camera work for Miami’s website. She chronicled the women’s basketball team’s season, covered the Hurricanes’ Pro Timing Day and interviewed the likes of Ed Reed, Bryant McKinnie and Calais Campbell at various Miami events.

Every opportunity Audibert could find, she took. And when the demo tape Audibert put together landed in the hands of her former coach, there was little question the budding broadcaster had talent – and plenty of drive.

“She was humble enough to take whatever nugget, whatever morsel, whatever assignment would drop, she’d go do it,” Hurricanes head women’s basketball coach Katie Meier said. “I remember her sending me her demo tape and I said to her, ‘Amy, this is really good. This tape is good. You present really well. You pop on screen. You speak really well.’

“When I got to coach her here, sometimes I’d be like, ‘You’re a little shy. You’re not a small person. Go be who you are. Let’s go.’ Seeing her now being bold, that’s what got her this opportunity. I’m really, really proud of her.” 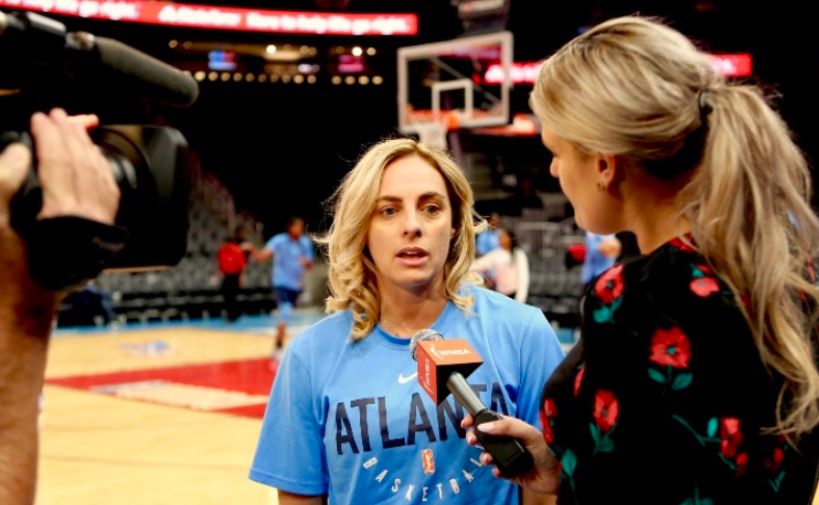 Today, Audibert is an analyst for Toronto’s G League team, the Raptors 905. She’s also an analyst for the WNBA’s Atlanta Dream. She aspires to, one day, work as a regular full-time analyst for an NBA team and welcomes the challenge and grind that will come with covering a regular 82-game schedule.

She says every step she’s taken – and her time at Miami – prepared her for a night she won’t forget any time soon.

And while Audibert appreciates the historic nature of last week’s broadcast – which was announced on International Women’s Day – she hopes that one day, the concept of women calling NBA games becomes the norm and not anything out of the ordinary.

“It was all very overwhelming and yes, it was historic and wonderful, especially for women and little girls that were watching, but at the same time, we just wanted to do our jobs,” Audibert said. “We were grateful for the opportunity and we know what it meant. But, we all work in television. We’ve been working in television. This wasn’t just a gesture. We showed there are women that do work in the industry that are capable. When you look at the play-by-play jobs, the analysts, and those types of roles, they can be filled by women. They are being filled by women…

“Definitely, afterward, you start thinking ‘This just happened. We just did this.’ And it was a great experience.”