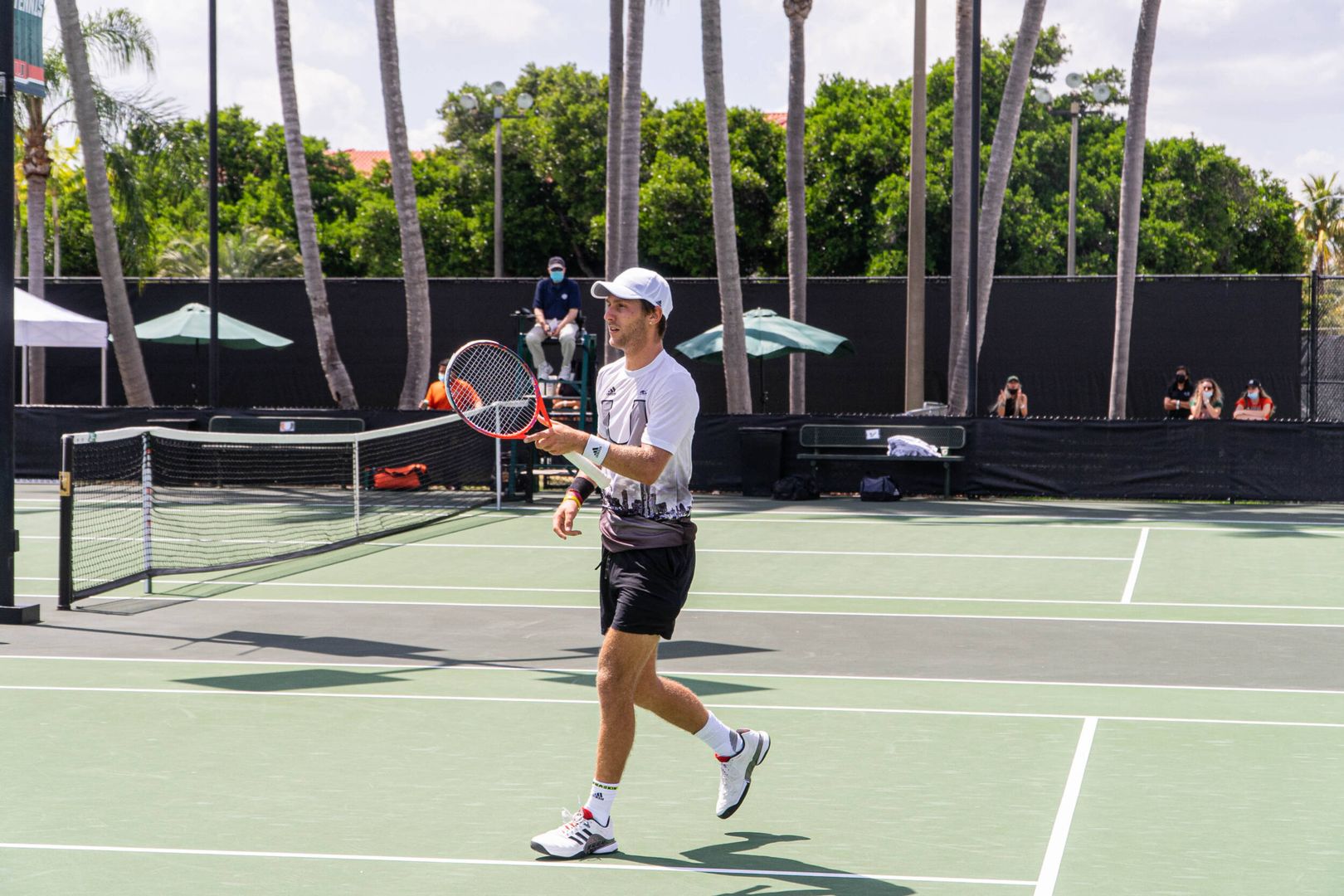 CORAL GABLES, Fla. –  Returning to its home courts following a four-match road stretch, the University of Miami men’s tennis team returned to form with a hard-fought victory over No. 29 South Florida, 4-3.

“South Florida is a very good and confident team who were hot after winning eight of their last nine matches,” Miami head coach Aljosa Piric said. “They had some really tough, 4-3, wins and are a very difficult team to play.”

Facing a pair of top-40 doubles tandems on courts 1 and 2, the Hurricanes got off to a fast start Saturday afternoon at the Neil Schiff Tennis Center.

In the first match to conclude, senior Adria Soriano Barrera and junior Oren Vasser cruised against No. 38 Chase Ferguson and Pierre Luquet, 6-3.

When the advantageous point was clinched by No. 50 Miami, seniors Bojan Jankulovski and Stephen Madonia were in a back-and-forth match, 4-5 (40-15), against Alvin Tudorica and Ivan Yatsuk.

“Darragh [Glavin] and I believe in our team. We have believed in our team from the beginning, but this is one of those years where we are continuing to grow and learn as a team each week,” Piric said. “We haven’t had a lot of time to prepare for this season and we are making some adjustments as the season progresses. We have seen a lot of growth, even with the recent hits we have taken, in this team and how they are competing.

“So, today we felt like it was a much win match and our guys responded. They showed up with tremendous energy in doubles, beating a couple good teams to win the doubles point,” Piric continued. “And then Oren at six was really a catalyst for us today, getting us on the board fast before Adri and Stefan [Milicevic] clinched. The rest of the guys competed really well and it came down to the wire. They didn’t quite pull it out, but our level of competition was where it needs to be from this point forward. This is a win we can use to continue to build momentum and confidence and see how good we can be.”

Dominating from start to finish, Vasser quickly doubled Miami’s lead with a 6-1, 6-1 victory over Bollipalli.

Shortly after, No. 34 Soriano Barrera got back on track with a straight-set triumph over Ferguson, 6-2, 6-4.

In a setback for Miami, Jankulovski came up short against Wojcik, 3-6, 2-6.

Clinching the match for the Hurricanes, No. 64 Stefan Milicevic earned a hard-fought victory over Luquet, 6-3, 6-3.

With the team win sealed, Aubone and Hannestad battled until the very end on courts 5 and 3, respectively, but lost a pair of tight matches in third-set tiebreakers.

Up next, Miami will welcome Louisville to its home court on March 26 at 3 p.m., before hosting Notre Dame on March 28 at 11 a.m.