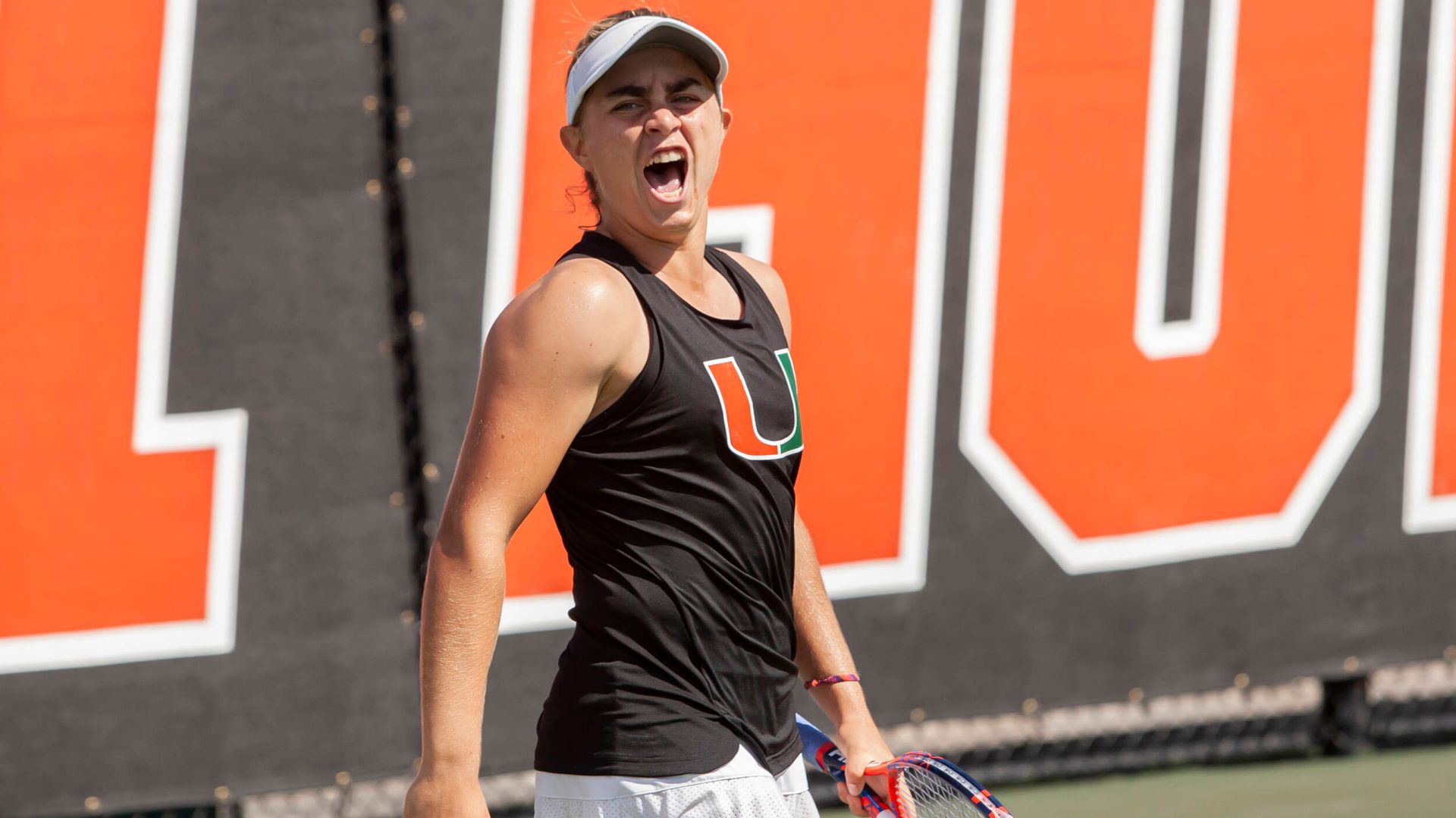 “Our team did an incredible job of handling adversity today. We knew what to expect going in and, for the most part, we handled things very well,” Miami head coach Paige Yaroshuk-Tews said. “Whenever you pull two on the road at Syracuse and BC, one thing is evident—we were pretty tough this weekend. We need to continue improving, but it is definitely a step in the right direction.”

Miami, though, thwarted any hopes of a doubles comeback, as fifth-year senior Estela Perez-Somarriba and freshman Isabella Pfennig won both remaining games on Court 1 to close out a 6-3 win against No. 25 Yufei Long and Kylie Wilcox.

It marked the second top-25 doubles win of the spring for Perez-Somarriba and the first ranked doubles triumph for Pfennig in her young career.

Once singles play began, Khodan did not need long to rack up her third straight win and double Miami’s lead. The Ivano-Frankivsk, Ukraine, native cruised a 6-4, 6-2 triumph over Hailey Wilcox in a match that ended nearly 20 minutes before any others.

Second-ranked Perez-Somarriba notched the Hurricanes’ third point of the day by downing Kylie Wilcox, 6-4, 6-4. It marked the 148th singles win of her illustrious career, moving her past Duke’s Kathy Sell for sole possession of fourth place on the all-time ACC leaderboard.

With the match result already determined, Urrutia registered an impressive comeback victory to tack on Miami’s fifth and final point of the day. After a wide loss in the opening set, she narrowly took the second and then won a 10-point tiebreaker to finish with a 1-6, 7-6 (8-6), 1-0 (10-8) result.

Boston College closed out the competition by adding another point to its total, as Lopez defeated Tahan, 2-6, 7-5, 6-3.

Miami improved 26-2 all-time against the Eagles with the victory, which snapped a two-match road losing streak in the series.

The Hurricanes now return to Coral Gables, Fla., where they finally begin their home slate Wednesday at 11 a.m. against USF at the Neil Schiff Tennis Center.