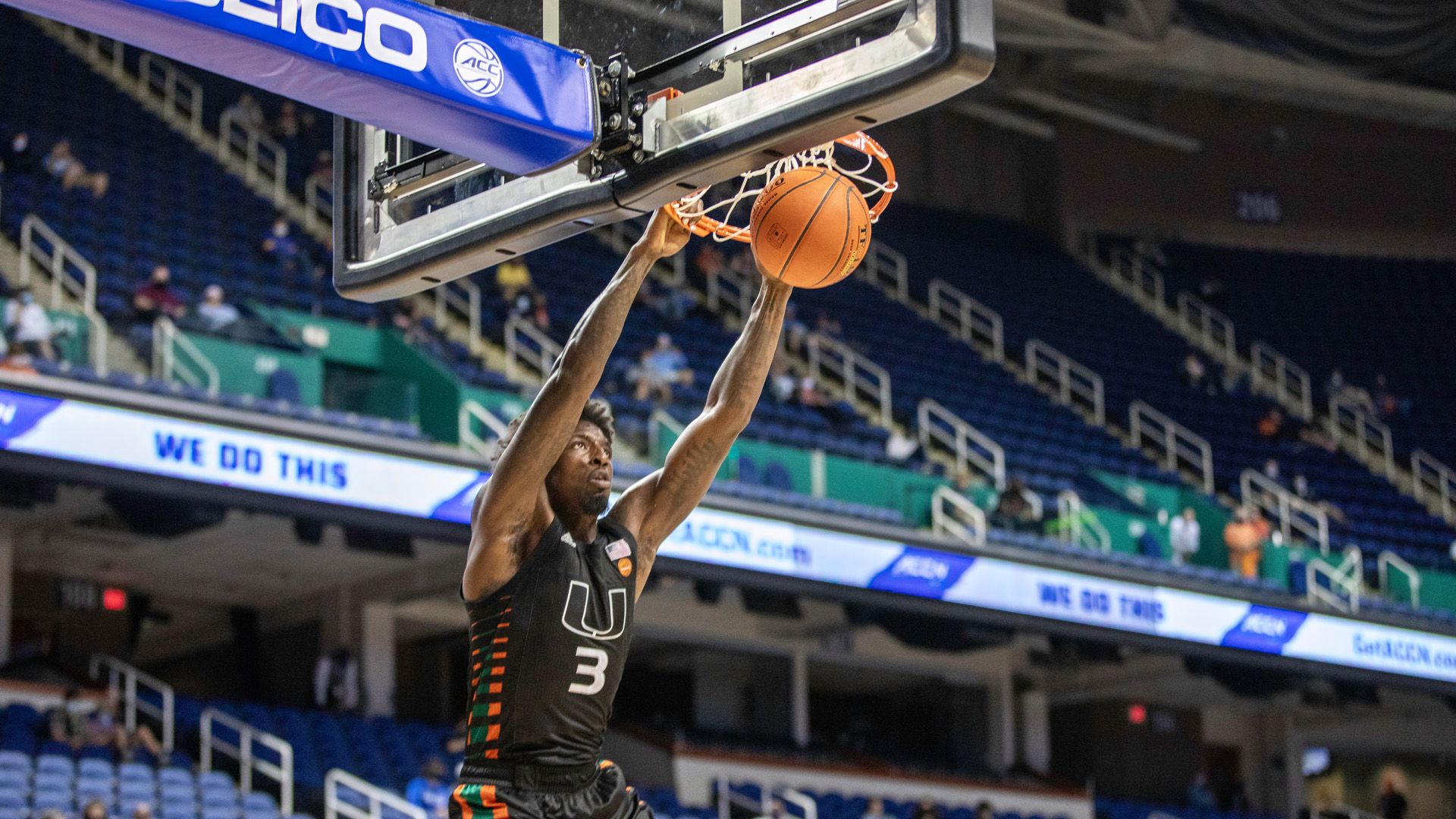 The first No. 13 seed to reach the quarterfinals, Miami led the fourth-seeded Yellow Jackets by seven early in the second half. However, playing a third game in as many days with only six available student-athletes, it could not hold on at the Greensboro Coliseum.

Redshirt senior guard Kameron McGusty scored a game-high 25 points, the third-most by a Hurricane in the ACC Tournament, in the season-ending defeat.

“That was a heck of a fight. I thought we gave it all we had right up until the final buzzer,” Miami head coach Jim Larrañaga said. “What killed us were the turnovers in the second half. We struggled to complete passes against their defense and those turnovers led to easy baskets. Our half-court defense [at the other end] was pretty good.”

The Hurricanes held Georgia Tech to just two makes on its final 12 field-goal attempts of the session, including a 0-of-6 mark over the last 3:45. Redshirt senior center Nysier Brooks scored 16 points in the opening 20 minutes, shooting 6-of-8 at the line and 5-of-7 from the floor, helping Miami to a 12-of-23 (52.2 percent) ledger in the latter category.

The Hurricanes upped their lead to seven on a 3-pointer by McGusty to open the second half, but the Yellow Jackets clawed back to go in front, 45-44, with 14:22 to go. Although Miami went back in front and led by four with under 13 minutes left, its offense then went cold and the Yellow Jackets built and eight-point edge, 61-53, with 7:19 on the clock.

The Hurricanes eventually trimmed the deficit to three on a McGusty 3-pointer with 1:17 left and then, after a Georgia Tech basket, the Katy, Texas, native hit another one to make it a two-point game, 68-66, with 31.9 ticks remaining. Miami got no closer, though, and the Yellow Jackets advanced to the ACC Tournament title game with the four-point victory.

McGusty’s 25 points came on 10-of-16 shooting, as he set a career high in makes and tied for the second-most by a Hurricane in the ACC Tournament. He went 3-of-7 from 3-point range and grabbed a team-high seven rebounds.

Brooks finished with 19 points, logging 6-of-11 mark from the field and a 7-of-10 figure from the line, while sophomore guard Isaiah Wong totaled 12 points and a team-high four assists.

“Nysier Brooks, I thought, played a fabulous game. They started doubling him, which really took his scoring away, but he ended up with 19 points and six rebounds,” Larrañaga said. “We couldn’t get Isaiah going. Kam had 25, which was a great game for him. We needed just more offense and fewer turnovers.”

Miami held senior forward Moses Wright, the ACC Player of the Year, to just seven points on 3-of-9 shooting before he fouled out with 2:28 to play.

MIAMI HURRICANES POSTGAME NOTES
– The Hurricanes moved to 14-12 all-time against Georgia Tech, including 1-1 at neutral sites, 1-1 in the ACC Tournament and 7-6 in Larrañaga’s tenure.
– Miami is now 17-16 all-time in the ACC Tournament, including 11-9 under Larrañaga, 13-9 in North Carolina, 11-7 in Greensboro, 3-9 in the quarterfinals and 1-2 in third games.
– In addition, the Hurricanes moved to 7-14 as a lower seed, 7-5 as a double-digit seed, 2-1 as the No. 13 seed, 11-15 versus single-digit seeds, 1-3 against fourth seeds and 0-1 in 4/13 games at the ACC Tournament.
– Including its time in the BIG EAST, Miami is now 23-28 all-time in conference tournament competition.
– Larrañaga, who entered the game with the 11th-most victories of any active Division I coach, is now 670-464 in 37 years as a head coach, including 200-130 in 10 seasons at Miami.
– Miami became just the 14th double-digit seed to play in the ACC Tournament quarterfinals, including the first since 2018 and the first team seeded No. 13 or lower.
– The Hurricanes ended the 2020-21 campaign without a single positive COVID-19 test dating back to mid-July; the tally includes all 30-plus members of the Tier 1 testing group combining for approximately 2,000 negative results since thrice-weekly testing started in mid-October.
– For the eighth time this season, Miami used a starting lineup of Brooks, McGusty, Wong, senior guard Elijah Olaniyi and sophomore forward Anthony Walker.
– For the eighth straight game, Miami played without five scholarship players, all of whom are out for the season, due to injury: sophomore guard Harlond Beverly (back), senior guard Chris Lykes (left ankle), redshirt senior center Rodney Miller Jr. (right knee), freshman guard Earl Timberlake (left shoulder) and redshirt senior forward Sam Waardenburg (left foot).
– The Hurricanes ended the season with nine players combining to miss a total of 113 games due to injury, including four individuals—Lykes, Miller, Timberlake and Waardenburg—each missing 20-plus.
– McGusty’s 25 points trailed only the 32 by Durand Scott on 3/16/13 against NC State and the 28 by Shane Larkin on 3/17/13 versus North Carolina for the third-most in program history in the ACC Tournament.
– McGusty is the second Hurricane—third occurrence—to log double-digit made field goals in an ACC Tournament game, joining Durand Scott, who notched 12 on 3/16/13 versus NC State and 10 on 3/13/10 against Duke.
– Brooks’ 10 free-throw attempts tied for the fourth-most by a Miami player in ACC Tournament competition.
– The Hurricanes’ five blocked shots tied for their fifth-most in an ACC Tournament contest.
– Georgia Tech’s 46.7 percent mark tied for the fourth-best 3-point clip by a Miami foe in the ACC Tournament.
– The Hurricanes dropped to 20-3 when leading at halftime over the last two seasons, with two of the three losses in the ACC Tournament.
– Brooks, who surpassed 650 points in his career, scored in double digits for the 23rd time, including the ninth this season.
– Brooks scored 16 first-half points for the second time in the last four games after never tallying over 14 in a full game previously all season.
– Twice in Brooks’ career has he reached 10 free-throw attempts, with both coming against Georgia Tech this season.
– Wong, who surpassed 700 points and 200 free-throw attempts at Miami, tallied double-figure points for the 33rd time, including the 23rd in 27 games this year.
– Thursday marked just the second time all season, along with the 3/1/21 outing at No. 21/20 Virginia, that Wong tallied four turnovers in a game.
– McGusty, who moved past 1,200 points in his career, scored in double digits for the 63rd time, including the 14th in 2020-21, and reached 20 points for the 13th time, including the third in 2020-21.
– McGusty’s prior high in made field goals was nine, set multiple times, most recently on 3/5/21 against Boston College.