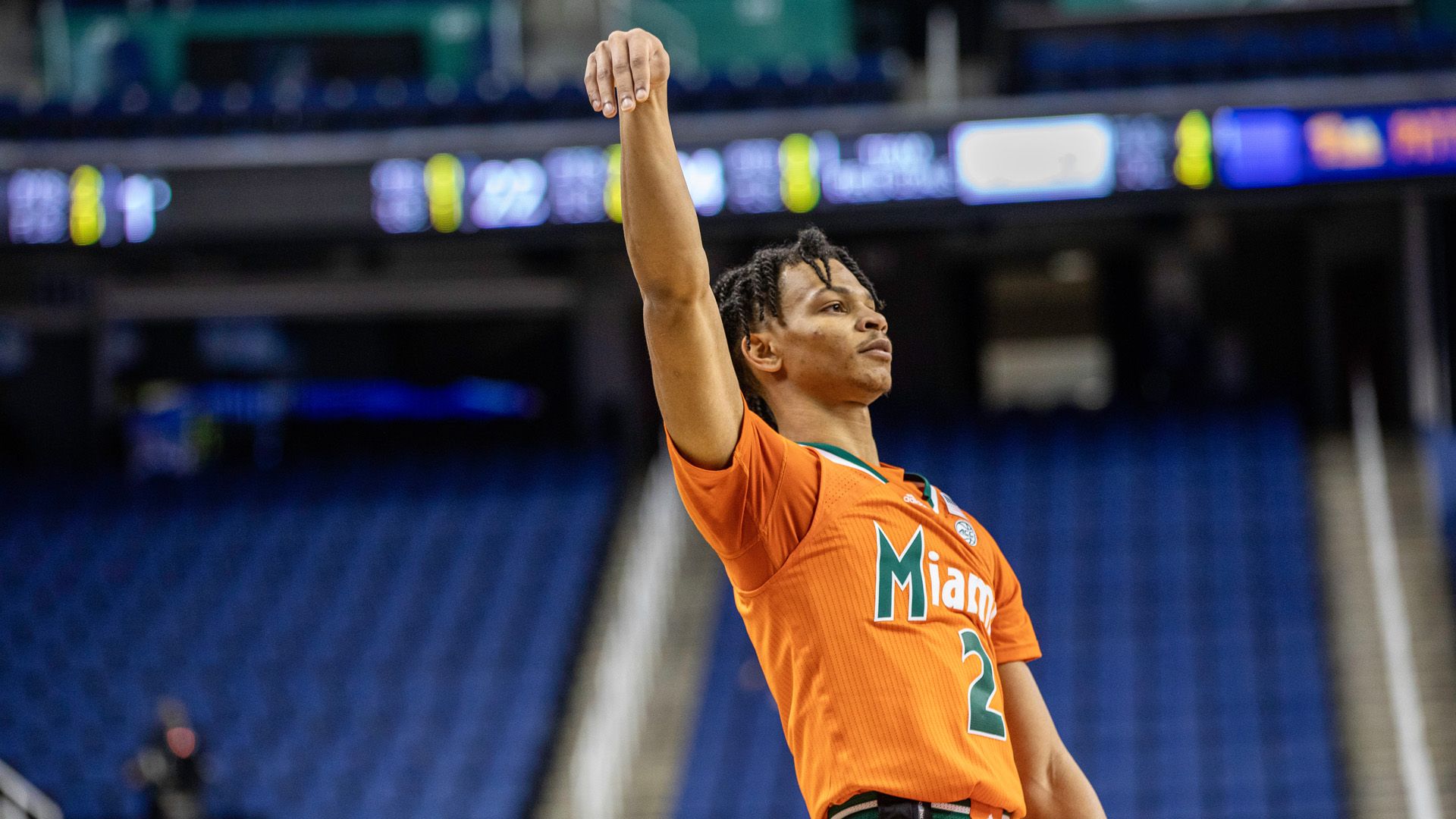 The No. 13-seeded Hurricanes, despite playing with only six available scholarship student-athletes, used a balanced offensive attack to defeat the No. 12-seeded Panthers. All five starters scored 12-plus points, led by 20 from sophomore guard Isaiah Wong.

“I’m just really proud of our guys for the energy and effort they brought to the game,” Miami head coach Jim Larrañaga said. “They played with a great deal of confidence. They executed the game plan extremely well. Probably the most impressive thing is they shared the ball so well; we scored 79 points and had 17 assists, which really hasn’t been there all year.”

Both sides shot well from 3-point range in the opening 20 minutes, with the Panthers posting a 6-of-14 (42.9 percent) mark, including a 3-of-4 clip from senior guard Nike Sibande, and the Hurricanes notching a 5-of-13 (38.5 percent) ledger.

The Panthers did not get any closer than four down the stretch, as Miami held strong for the victory. The Hurricanes made five of their final seven field-goal attempts and Wong connected on four straight free throws in the closing 30 seconds.

Wong, who now co-leads the ACC with 10 20-point games, shot 9-of-10 from the stripe setting a new season high in makes and finishing one shy of his top mark in attempts. Sophomore forward Anthony Walker posted 14 points and a team-high nine rebounds in a career-best 39 minutes, while McGusty also notched 14 points. All three of them dished out four assists, the mark tying a career high for Walker.

“All five starters really executed their role extremely well,” Larra؜ñaga said. “We got some good interior baskets from Nysier Brooks and Anthony Walker. We had some nice threes from Kam, Isaiah and Elijah.”

Freshman guard Femi Odukale paced the Panthers with a career-high 28 points. He shot 11-of-16 from the floor, including 4-of-8 from deep. Sibande finished with a season-best 24 points, logging a 9-of-15 clip from the field and a 5-of-8 mark beyond the arc. Redshirt sophomore guard Ithiel Horton added 10 points.

Sophomore forward Justin Champagnie, a First Team All-ACC performer who is second in the ACC in scoring and first in rebounding, totaled 10 points and 11 rebounds. However, Miami held him to just 5-of-20 shooting, including a 1-of-8 clip on 3-pointers. He made just three of his first 17 attempts through 37-plus minutes.

“You’ve got to give Anthony Walker a lot of credit because he was really the only one that guarded him,” Larrañaga said. “Justin Chanmpagnie is a dynamic player offensively. He can do a lot of different things. He’s a terrific offensive rebounder, but today was not his today. Today was our day.”

Free-throw shooting proved to be the difference in the game, as Miami finished 22-of-28 (78.6 percent) to tie a season best in makes. The Hurricanes made 11 of their first 12 attempts from the line. Meanwhile, the Panthers registered a 5-of-14 (35.7 percent) mark at the stripe after opening just 1-of-6.

In addition, Miami had 17 assists, its second-most ever in an ACC Tournament outing, and just six turnovers, while Pittsburgh notched nine assists and 14 turnovers. The Hurricanes logged a 22-6 edge in points off giveaways, as well as 19-4 cushion in fast-break points.

Miami now takes on fifth-seeded Clemson Wednesday at 2:30 p.m., live on ACC Network from the Greensboro Coliseum, in the second round of the ACC Tournament.

MIAMI HURRICANES POSTGAME NOTES
– The Hurricanes moved to 24-20 all-time against Pittsburgh, including 2-2 at neutral sites, 2-2 in conference tournaments, 1-0 in the ACC Tournament and 8-3 in Larrañaga’s tenure.
– Miami is now 16-15 all-time in the ACC Tournament, including 10-8 under Larrañaga, 12-8 in North Carolina, 10-6 in Greensboro, 9-2 in the first round and 13-4 in opening games.
– In addition, the Hurricanes moved to 6-13 as a lower seed, 6-4 as a double-digit seed, 1-0 as the No. 13 seed, 6-1 versus double-digit seeds, 2-0 against No. 12 seeds and 1-0 in 12/13 games at the ACC Tournament.
– At 16-15, Miami owns a .516 winning percentage in the ACC Tournament, making it one of just five teams over the .500 mark, alongside Duke, North Carolina, Notre Dame and NC State.
– Including its time in the BIG EAST, Miami is now 22-27 all-time in conference tournament competition.
– Larrañaga, who entered the game with the 11th-most victories of any active Division I coach, is now 669-463 in 37 years as a head coach, including 199-129 in 10 seasons at Miami.
– With 669 victories, Larrañaga passed Gary Williams for sole possession of the No. 36 spot on the all-time Division I wins list.
– In eight of Larrañaga’s 10 years at Miami, the Hurricanes have won at least one game in the ACC Tournament.
– For the sixth time this season—making it the most common group—Miami used a starting lineup of Brooks, McGusty, Olaniyi, Walker and Wong.
– For the sixth straight game, Miami played without five scholarship players, all of whom are out for the season, due to injury: sophomore guard Harlond Beverly (back), senior guard Chris Lykes (left ankle), redshirt senior center Rodney Miller Jr. (right knee), freshman guard Earl Timberlake (left shoulder) and redshirt senior forward Sam Waardenburg (left foot).
– The only time Miami had more assists in an ACC Tournament contest was on 3/10/16, when it totaled 18 against Virginia Tech.
– Wong’s 10 free-throw attempts matched the fourth-highest mark by a Miami player in the ACC Tournament.
– Pittsburgh’s 29 made field goals tied the highest total the Hurricanes have ever allowed in an ACC Tournament game.
– Odukale tallied the most made field goals and co-third-most points ever by a Miami foe in ACC Tournament play, while Sibande tied for the third-most makes.
– Champagnie’s field-goal attempts marked the highest total ever by a Miami opponent in the ACC Tournament.
– This is the first time the Hurricanes have won consecutive games since earning wins in their first three games of the season against North Florida, Stetson and Purdue.- The last time five Hurricanes scored in double figures was 12/29/20 at No. 24/RV Virginia Tech and the last time all five Miami starters did so was on 11/9/18 against Lehigh in the 2018-19 season opener.
– Miami’s six turnovers marked its second-lowest total of the season, trailing only the five it registered on 2/14/21 at Notre Dame
– The 22 made free throws tied for the Hurricanes’ third-highest total ever in ACC Tournament play, as did the 28 attempts.
– The only other times this season Miami scored 40-plus points in the opening half were the first two games, both with Lykes playing, as it tallied 42 in the opener against North Florida (11/29/20) and 40 in the next contest versus Stetson (12/4/20).
– The Hurricanes held Champagnie to 3-of-13 shooting in the first half, including a 1-of-6 mark from 3-point range.
– Senior guard Willie Herenton connected on a 3-pointer with 13:04 on the first-half clock to stop a 9-0 run by the Panthers, marking his first time scoring before the intermission in his career.
– McGusty, who surpassed 2,750 minutes played as a collegian, tallied double-digit points for the 61st time, including the 12th in 2020-21.
– Wong, who eclipsed 150 made free throws at Miami, scored in double figures for the 31st time, including the 21st this season, and 20-plus points for the 13th time, including the 10th this season.
– Duke’s Matthew Hurt and Georgia Tech’s Moses Wright are the only other ACC players with 10 20-point performances this year.
– Wong’s nine made free throws tied for the third-most by a Hurricane in an ACC Tournament contest, just one shy of the program record.
– Olaniyi, who reached 150 assists as a collegian, registered double digits in the scoring column for the 72nd time, including the 13th in 2020-21.
– Walker notched double-figure points for the 14th time, including the 13th this year and sixth time in the past seven games.
– Walker has now logged four assists in back-to-back games after never previously eclipsing two in an outing through his first 47 appearances.
– Brooks, who reached 500 rebounds in his career, tallied double-digit points for the 22nd time, including the eighth this season.
– The only other time Brooks tallied amassed three steals in a contest was on 1/10/19 against Tulsa, while he was at Cincinnati.