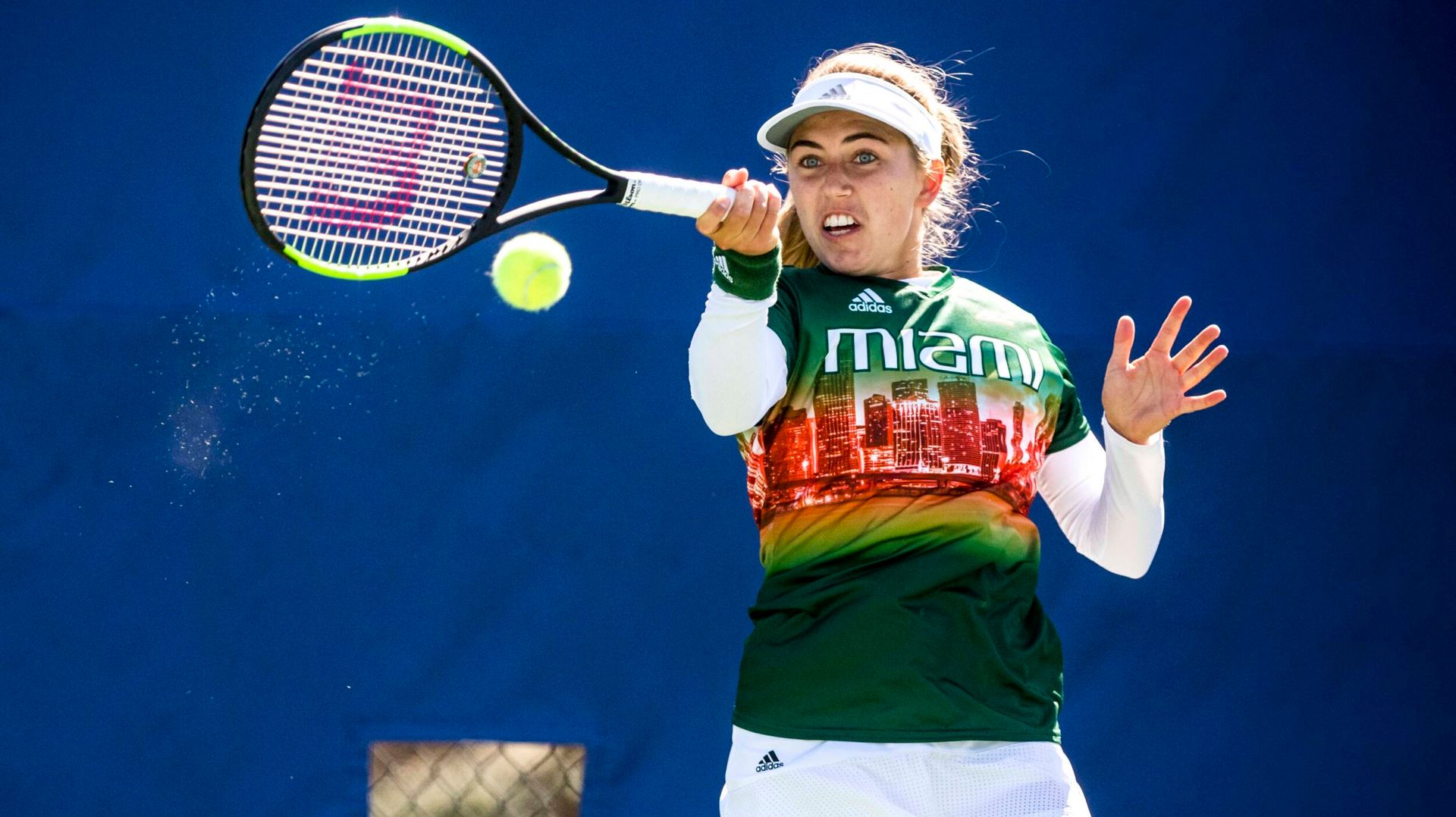 DURHAM, N.C. – The University of Miami women’s tennis team fell one point short of a top-10 road win Sunday afternoon at eighth-ranked Duke in a 4-3 setback.

The near-upset came despite the Hurricanes playing with just five scholarship student-athletes at Ambler Tennis Stadium due to positive COVID-19 tests, subsequent quarantining and contact tracing within the program.

Three Miami players, including two freshmen, earned top-50 singles victories in a match the Hurricanes started with a one-point deficit due to their undermanned lineup.

Duke (9-1, 4-0 ACC) took the opening doubles decision with a walkover victory by Kelly Chen and Georgia Drummy. It did not take long, however, for No. 30 Miami (3-5, 1-3 ACC) to even the tally, as second-year freshmen Diana Khodan and Maya Tahan cruised past Chloe Beck and Karolina Berankova, 6-0.

“In doubles, Maya and Di did an incredible job of just competing with the fight and intensity that defines our program,” Miami associate head coach Alex Santos said.

With all eyes on Court 1, the Blue Devil duo of Margaryta Bilokin and Meible Chi took the final three games against fifth-year senior Estela Perez-Somarriba and freshman Isabella Pfenning to earn a 6-3 result and put Duke ahead, 1-0.

The Blue Devils’ lead automatically jumped to 2-0, as No. 95 Beranokva garnered a walkover singles victory with Miami unable to fill its lineup.

Miami, however, held a lead on all three remaining courts and continued to fight, even with the match outcome determined.

First, Khodan notched the most impressive win of her career, defeating No. 44 Bilokin in dominant fashion, 6-3, 6-2, for her first ranked singles victory.

Shortly thereafter, second-ranked Perez-Somarriba topped eighth-ranked Chen, 6-2, 6-4, in a top-10 showdown of 2019 NCAA Singles Championship semifinalist. With the victory, the Madrid native is now 12-5 in her career against top-10 foes, including 7-0 in two-set affairs.

Pfennig earned Miami’s last point of the day with the highest-ranked victory of her young collegiate tenure. The Gauting, Germany, native narrowly defeated No. 28 Georgia Drummy, 7-6 (7-5), 6-4, to make it a 4-3 final score.

All five of the Hurricanes’ setbacks this season have come on the road against top-20 opponents, including two by 4-3 margins against top-12 foes.

Miami will be back in action in just five days, as it travels to Syracuse, N.Y., for a Friday matchup at 3 p.m. against No. 50 Syracuse.